Sunday saw the reopening of a crossing connecting the southern resort city of Eilat with its Jordanian neighbor Aqaba where, according to Hebrew media reports, vacation prices that are a fraction of the cost in Israel are enticing tourists to cross the border.

As one tourist told Channel 12 news, Aqaba is “close to Eilat, with the atmosphere of Eilat and half the price of Eilat.”

Prices in Israel have been pushed up as the hotel and tourism industries struggle to survive after devastating losses caused by prolonged shutdowns and restrictions during the coronavirus pandemic.

The Yitzhak Rabin Crossing between Eilat is set to operate Sunday-Thursday, 8 a.m.-3 p.m.

Israelis who were waiting to cross into Jordan told Channel 12 that it was the attractive prices that drew them to travel abroad.

View of the Yitzhak Rabin border terminal on the Israeli side, July 20, 2012 (Mendy Hechtman / Flash90)

A review by Channel 12 and the Kan public broadcaster found that prices in Aqaba can be as little as a quarter of the cost of staying at a comparable hotel in Eilat.

For a family with two children, a four-day mid-week stay at a five-star hotel in Eilat would cost NIS 11,905, according to Channel 12. In Aqaba, at a similar hotel, the price was NIS 4,293.

A weekend trip in Eilat for the same family was quoted by the station as costing NIS 12,600, compared to NIS 3,600 in Aqaba.

A review by Kan of the hotel prices for a couple staying over the weekend in Aqaba found nightly prices ranging from around NIS 1,300 to NIS 2,100. In Eilat, the prices for a similar hotel visit ranged from NIS 2,500 to NIS 8,3000. 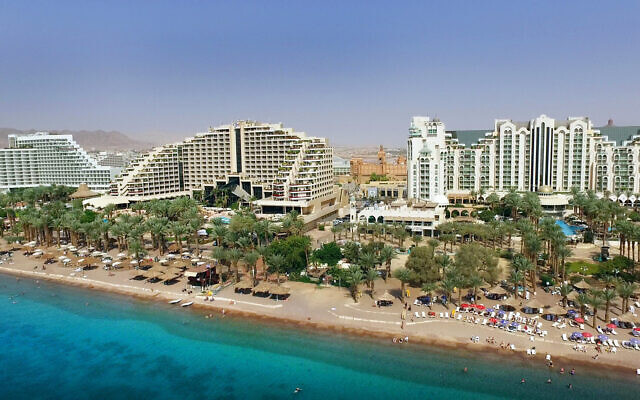 Israelis vaccinated against COVID-19 are not required to take a PCR coronavirus test before crossing into Jordan, but those who are not vaccinated, including anyone who recovered from COVID-19, must present a negative virus test at the border, Channel 12 said.

Coming back into the country, all Israelis must take a virus test within 72 hours of their return. Those who are not vaccinated, including children, will need to quarantine for 14 days on their return, with the period potentially cut to 10 days with two negative tests.

Alona Tatarsky, owner of the Roam Jordan travel agency, told Kan that she has been contacted by many Israelis interested in taking a vacation in Jordan.

She dismissed any concerns about traveling to the Arab country.

“Jordan,” she said, “is a very safe country, including for Israelis.”

Many of the Israelis that Kan spoke to complained of what they called the unjustifiable prices in Eilat.

The hotel prices have caught the attention of Tourism Minister Yoel Razvozov, who last month told Channel 12 he had decided to pull an advertising campaign for domestic tourism, which launched before he took office in early June, off the air due to the high costs of vacation lodging.

“I don’t see a reason to continue the campaign while the prices of vacations are so high — it’s a pity to waste public funds on this,” Razvozov said. “Vacations are not just for the rich.” The minister vowed to “act urgently” in order to deal with problem.

Last week the Tourism Ministry announced it would be requesting the Israel Hotel Association (IHA) compile a list of hotels that are willing to provide discounts to potential customers. The IHA is expected to publish a list of more than 100 hotels from around the country offering at least 15% off, alongside other offers.

The ministry said that prices within Israel are particularly high due to the COVID crisis causing a severe shortage of workers and restrictions on tourists entering Israel. A representative for the Tourism Ministry said that hotels in the Dead Sea and Eilat, two of the biggest tourist destinations in Israel, declined to participate, in part because hotels there are already close to full occupancy.