The first motions of no confidence in the newly installed government were defeated in the Knesset on Monday, with 59 lawmakers opposed and 50 in favor, during a raucous plenary session.

The motions were spearheaded by Benjamin Netanyahu’s Likud, which was ousted from power last week, after 12 years, with the establishment of the new government of right-wing, centrist, left-wing, and Islamist parties led by Prime Minister Naftali Bennett.

The votes on Monday were preceded by a heated debate that saw New Hope coalition MK Ze’ev Elkin — formerly Netanyahu’s confidant and a Likud cabinet minister — go head-to-head with his former party leader, accusing him of sending “thugs” to protest outside his home and frighten his children.

“When you create a discourse of hatred and division, it’s legitimate, but when others think differently than you and criticize you — that’s illegitimate,” said Elkin, the housing minister, in comments directed at opposition leader Netanyahu. “When there are demonstrations outside your official residence, that’s illegitimate. But when you send thugs — using party funds — to my home and the homes of others here, to wake up a 5-year-old girl at 11 p.m. to frighten her, that’s legitimate.”

“When you, Netanyahu, offer Bennett to become prime minister in a rotation with you, with six Knesset seats, that’s legitimate. But now, when you’re not in this government — it’s illegitimate,” he continued.

Elkin, loudly heckled by opposition lawmakers, attempted to yell over them, as Knesset Speaker Mickey Levy appeared to lose control of the room temporarily.

Elkin left Likud to join Gideon Sa’ar’s New Hope party ahead of the March 2021 elections, blasting Netanyahu for his conduct and accusing him of putting his personal considerations above the country’s best interests. Likud supporters have been regularly gathering outside the Elkins’s residence to demonstrate. Last month, the Jerusalem District Court issued a temporary restraining order against a supporter of Netanyahu who verbally harassed Maria Elkin and her children.

Netanyahu later on Monday addressed the Knesset plenum to counter Elkin’s remarks. He accused his former ally of “skipping with amazing ease from party to party to party,” in reference to Elkin’s move from the centrist Kadima to Likud to New Hope.

“This government is simply dangerous, we will topple it much faster than you think,” added Netanyahu.

The session also saw United Torah Judaism leader Moshe Gafni call Bennett a “piece of nothing” and blame him for the resurgence of COVID-19 in the country.

“He became prime minister, and before five days have passed, the coronavirus is back,” said Gafni, mocking the premier for writing a book about the handling of the pandemic when he was in the opposition.

Earlier Monday, Sa’ar, the justice minister, used his opening statement at his New Hope party’s faction meeting to address controversy surrounding a bill that would extend the ban on Palestinian family reunification. 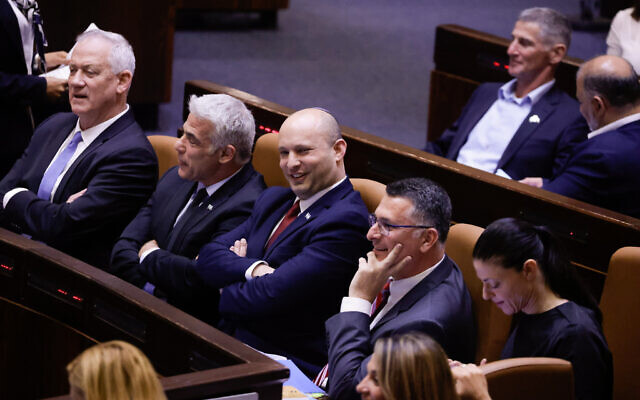 While Likud lawmakers in principle support renewing the legislation that bars granting citizenship to Palestinians who marry Israelis, many have indicated that they will vote against it, just to undermine the new government and attempt to divide it. A vote on the bill was postponed on Sunday, with the government apparently unable to muster a majority to pass the measure, even though most MKs back the legislation in principle.

“Likud is acting in a clear manner against its own principles,” Sa’ar said. “This is political schizophrenia. The opposition — apparently to try to embarrass the coalition, although I believe they’re only embarrassing themselves — is prepared to harm the good of the country as it itself defines it.”

The new government is internally divided over the issue, with Regional Cooperation Minister Issawi Frej of Meretz, fellow party member Mossi Raz, Labor’s Ibtisam Mara’ana, and the Arab Ra’am party opposing the measure as it currently stands, and calling for changes to be made.