Entry to Israel was expected to be limited to 200 citizens per day starting next week, as top ministers agreed to further tighten travel restrictions, aimed at preventing new strains of the coronavirus from reaching the country, that have left thousands of Israelis stranded abroad.

Prime Minister Benjamin Netanyahu, Health Minister Yuli Edelstein and Transportation Minister Miri Regev decided on the measure after they met Monday to discuss the looming expiration of an order requiring all those who arrive from abroad to quarantine in state-run hotels.

Urgent humanitarian cases will still be granted entry permission regardless of the daily quota.

The 200-person limit will be kept in place until “a technological solution is found or the quarantine in hotels is restored,” the Transportation Ministry said in a statement.

The ministry called on all those considering leaving the country in the coming days to weigh the necessity of the journey against the coming restrictions.

People who landed on a flight from England arrive at the Dan Panorama Hotel in Jerusalem, which is being used as a quarantine facility, on December 20, 2020. (Yonatan Sindel/Flash90)

The hotel quarantine order is set to expire at midnight as the Constitution, Law and Justice Committee has not granted an extension, demanding instead that the government find alternative means to ensure that travelers self-isolate.

Israel’s land and air gateways have been largely closed since January 25, with Ben Gurion Airport shuttered for all but a few special flights by Israeli airlines to bring back citizens stranded abroad.

Last week the government eased the lockdown while restricting entry to the country to 1,000-2,000 people a day. 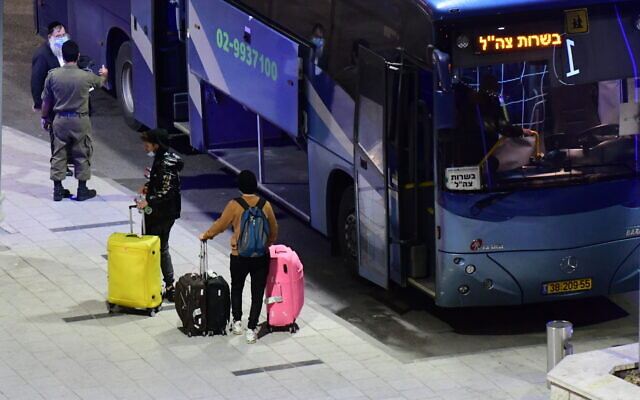 Passengers arriving in Israel on an emergency flight are seen at the Ben Gurion Airport on February 3, 2021. (Tomer Neuberg/Flash90)

Also Monday, the head of the Association of Secondary School Teachers in Israel responded to an announcement by the forum of 15 major cities that they will open middle and high schools in a rebellion against government orders, saying it was “irresponsible.”

The city mayors had decided to “take the law into their own hands and coerce the teachers and principals to violate the law,” Ron Erez said, urging that only the Health Ministry decide on the issue.

He said the union will only operate according to ministry instructions.

Teachers Union head Yaffa Ben David, who represents elementary school teachers, has also opposed the cities’ plan, as has the Center for Local Government, the country’s main organization of mayors.

The cities of Rehovot, Petah Tikva, and Ashdod on Monday all backed down from the threat, the Haaretz daily reported.

Health Minister Yuli Edelstein warned that mayors or principals who restart studies will face enforcement of the rules. 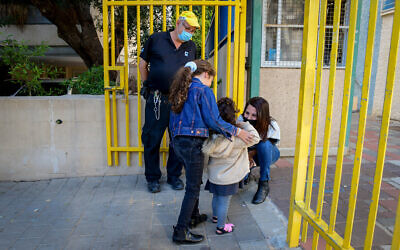 “I recommend that no one takes the law into their own hands, and certainly not elected officials,” he told Army Radio.

On Monday the government approved the first reading of a bill that will allow the Health Ministry to pass on details of those who have been vaccinated, and those who haven’t, to local authorities or the Education Ministry.

It passed with 21 votes in favor to 6 against.

The legislation is aimed at enabling local authorities to encourage those who have not been vaccinated to get the shots, while also providing the Education Ministry with information it may need to prevent virus outbreaks in the school system.

The bill will now go to the Knesset Labor and Welfare Committee for preparation for its second and third reading.