Israel’s ambassador to the United States and the United Nations, Gilad Erdan, is hosting a tour of Israel this week for his counterparts from around the world, and said Friday he hopes it will help Israel at the UN.

The 26-person delegation arrived in Israel Thursday night for the week-long tour, sponsored by the American Zionist Movement. Envoys from Kenya, Hungary, Argentina, the Czech Republic, Bhutan, the Dominican Republic, Ukraine, Tonga, Guatemala and Australia — as well as their spouses — were on the tour, in addition to representatives from Jewish organizations like March of the Living, AZM and B’nai B’rith.

“It will help us to block negative initiatives against Israel,” Erdan said to The Times of Israel on Friday. “Every country has its own vote at the UN, so every ambassador counts.”

Erdan said he decided to organize the trip for ambassadors to the US and the UN after the 11-day war between Israel and Gaza terror groups in May.

Speaking to The Times of Israel from the rooftop of the Aish World Center in Jerusalem’s Jewish Quarter, Erdan said he wanted the diplomats to “experience and learn firsthand about our security challenges, and also especially about the thousands of years of connection between the Jewish people and the history of the Land of Israel, the city of Jerusalem, the City of David and the Temple Mount, because those issues are being challenged every day at the UN and on the world stage.

“Whenever you experience Israel, you learn the complexity, you understand the deep roots and the history, and you go back someone different,” Erdan said.

Diplomats from around the world join US and UN envoy Gilad Erdan in Jerusalem, July 16, 2021 (Lazar Berman/Times of Israel)

“There can be no doubt, and I hope that after visiting here today, you have no doubt Jerusalem is the eternal capital of the State of Israel, and it will remain so forever,” Erdan told the diplomats in the capital.

“I am happy that Israel has turned its capital into a model of religious freedom and religious tolerance,” he added. 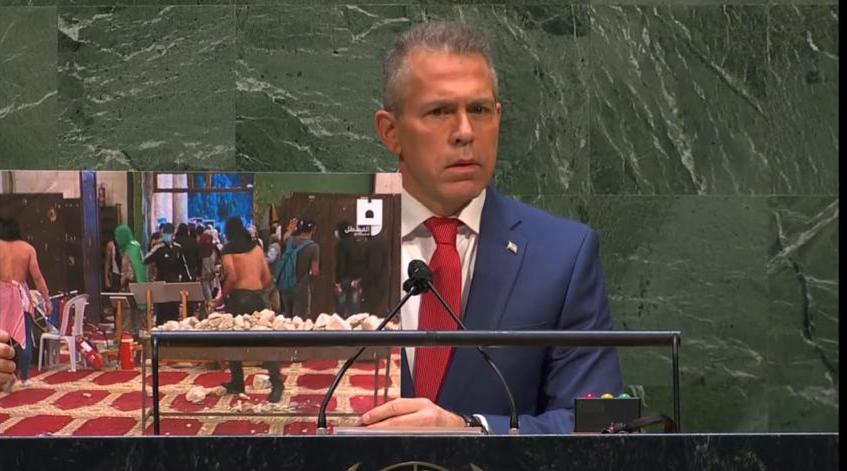 Israel’s Ambassador to the UN Gilad Erdan addresses the General Assembly on May 20, 2021. (Screen capture/UN)

Erdan will be leaving his post as envoy to the US as soon as a replacement is appointed, and will not continue in his post beyond the end of November.

Erdan said in a statement in June that he feels the new government should install its own representative in Washington.

However, the former Likud minister said he plans to continue to serve as Israel’s envoy to the United Nations.

Erdan has served as envoy to the UN since July 2020 and as ambassador to the US since January of this year.