BRUSSELS (AFP) — The EU said Wednesday that it is expecting 50 million Pfizer coronavirus vaccine doses earlier than expected, as rival drugmaker AstraZeneca faced a fresh setback after Denmark banned its use over blood clot links.

The news comes after Johnson & Johnson said it would delay its European rollout, also over blood clot fears — a major hit for the continent’s beleaguered immunization campaign, as several countries battle rising caseloads.

The J&J and AstraZeneca setbacks are a dampener on hopes that mass vaccination can allow a swift exit from a pandemic that has now killed close to three million people and ravaged the global economy.

But there was nonetheless some good news on the vaccine front, with 50 million BioNTech/Pfizer doses that were due to arrive in Europe only at the end of 2021 brought forward. They will start arriving as soon as this month.

Citing the uncertainty created by earlier delays, EU Commission chief Ursula von der Leyen stressed: “It is therefore important to act swiftly, anticipate and adjust whenever it is possible.”

A medical worker fills a syringe with a dose of Pfizer-BioNTech’s coronavirus vaccine at a new vaccination hub in Turin, Italy, on April 14, 2021. (Marco Bertorello/AFP)

The race to secure vaccines has sparked diplomatic rows, notably between the European Union and the UK after the bloc accused London of hoarding jabs.

Australia has also accused the EU of falling short on promised doses. Canberra’s trade minister will travel to Europe this week for talks with his counterparts in Germany, France and Brussels about vaccine exports.

‘I haven’t been able to bury you’

Johnson & Johnson said it would put off its European deliveries over reports of rare blood clots among people who had received the shot.

US health regulators also recommended pausing its use after six reported cases of clots — among more than 6.8 million J&J doses administered in the US.

And experts from the US Centers for Disease Control and Prevention (CDC) met Wednesday to decide whether or not to recommend new restrictions on its use.

The European Medicines Agency (EMA) said Wednesday it would make its recommendation on the safety of the J&J jab next week after evaluating clot links. 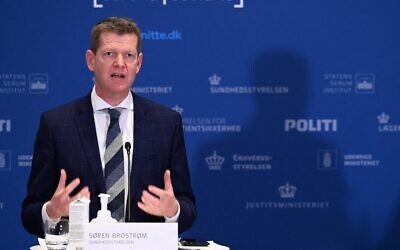 Soeren Brostroem, head of Denmark’s National Board of Health, explains during a press conference why the country has stopped using AstraZeneca’s coronavirus vaccine, on April 14, 2021, in Copenhagen. (Philip Davali/Ritzau Scanpix/AFP)

AstraZeneca has faced similar setbacks, with many countries now limiting its use to older people following isolated cases blood clots among younger populations, some fatal.

Denmark said Wednesday it would stop using it altogether — a European first — despite assurances from the EMA and the World Health Organization that the benefits far outweigh possible risks.

Russia’s state-run Gamaleya research institute meanwhile said there was no risk of blood clots from its Sputnik V vaccine.

Several countries, from Germany to India to Turkey, are battling a worrying spike in cases.

In Rome, a billboard company manager has put up huge signs around the city shaming authorities for their failure to end a shortage of burial plots due to surging death rates during the pandemic.

“Mum, sorry I’ve not been able to have you buried yet,” reads the message put up by Oberdan Zuccaroli in memory of his late mother, who died of a heart attack on March 8.

In India, more than 1,000 people tested positive after bathing in the River Ganges for the world’s biggest religious festival.

A huge crowd of worshippers packed the riverbanks to take a dip as part of a bathing ritual, despite India’s soaring virus cases.

“Our faith is the biggest thing for us,” Siddharth Chakrapani, a member of one of the Kumbh Mela organizing committees, told AFP, explaining why so many people entered the river. 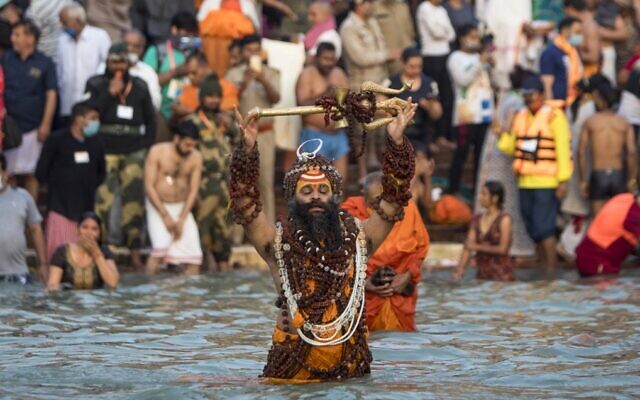 A Sadhu bathes in the Ganges river during the Kumbh Mela festival in Haridwar, India, on April 12, 2021. (Xavier Galiana/AFP)

The World Health Organization has meanwhile expressed concern that the pandemic could worsen in the Middle East and North Africa during the Muslim fasting month of Ramadan. 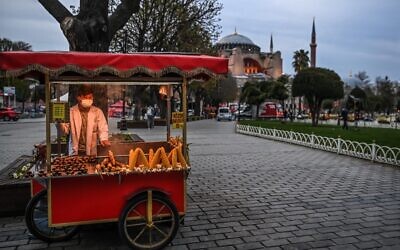 A Turkish street vendor in Istanbul on the first day of Ramadan, April 13, 2021. (Ozan Kose/AFP)

In Turkey officials imposed new restrictions including a tougher overnight curfew, while in Bangladesh police patrolled the capital as a strict nationwide lockdown was rolled out.

Most European countries are still facing virus restrictions due to stubbornly high caseloads, and on Wednesday France’s Bayonne festival — one of the continent’s largest gatherings, attracting around a million people each year — was forced to call off the July event.

But in Belgium, cafes and restaurants got the greenlight to open their terraces from May 8 after a slight easing of cases there. Swiss officials also announced that bars and restaurants and some leisure facilities could reopen next Monday.

In Japan, a spike in COVID cases forced a section of the Tokyo Olympics torch relay to be pulled from public roads.

But with just 100 days to go before the scheduled opening, International Olympic Committee vice president John Coates told reporters that cancellation was “certainly not” on the table.

“The Tokyo Games will be the light at the end of the tunnel,” he insisted.