NEW ORLEANS (AFP) — Hurricane Ida was upgraded to a Category Four storm, the US National Hurricane Center said Sunday, staying on course to hit New Orleans with sustained winds of 130 miles per hour (209 kilometers per hour).

Sunday, when Ida is due to make landfall, marks 16 years since Katrina, the devastating hurricane that flooded 80 percent of New Orleans, left 1,800 people dead and caused billions of dollars in damage.

“Ida is expected to be an extremely dangerous major hurricane when it makes landfall along the Louisiana coast this afternoon,” the center earlier said in its latest advisory when Ida was raised to Category Three.

Shops were boarded up and evacuations were underway Saturday in the southern US city, with officials warning residents to leave immediately or hunker down to ride out the storm.

“Everybody is scared because it’s the anniversary of Katrina and people didn’t take it seriously at the time,” said Austin Suriano, who was helping board up the windows of his father’s watch repair shop.

In preparation of Hurricane Ida, a US worker attaches protective plywood to windows and doors of a business in the French Quarter in New Orleans, August 28, 2021. (AP Photo/Eric Gay)

Category Four is the second-highest on the Saffir-Simpson hurricane wind scale, with winds rising up to 140 miles per hour.

US President Joe Biden warned Saturday that “Ida is turning into a very, very dangerous storm” when it had built to a Category 2 hurricane.

Earlier in the day, people evacuating from New Orleans and other cities clogged roads heading north as officials warned locals to leave immediately or hunker down.

All Sunday flights were canceled at New Orleans airport.

Louisiana Governor John Bel Edwards said Ida would be one of the most powerful storms to hit the state since the 1850s.

“Time is not on our side,” she told a briefing. “It’s rapidly growing, it’s intensifying.” 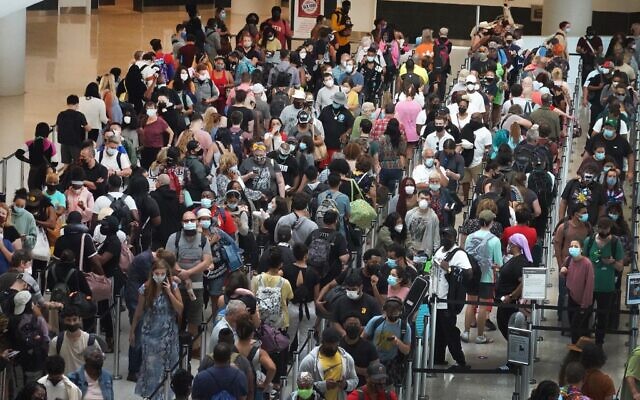 People stand in line to get through the TSA security checkpoint at Louis Armstrong New Orleans International Airport on August 28, 2021 in New Orleans, Louisiana, before the arrival of Hurricane Ida. (Photo by SCOTT OLSON / GETTY IMAGES NORTH AMERICA / Getty Images via AFP)

Southern Louisiana was bracing for massive damage and flooding as the fast-intensifying storm roared northward after pummeling western Cuba.

Biden said hundreds of emergency personnel had been sent to the region, along with food, water and electric generators.

Shelters were being prepared around the region, but Louisiana has been one of the hardest-hit US states by the COVID-19 pandemic, and Biden urged anyone heading to a shelter to wear a mask and take precautions.

The National Weather Service is forecasting a “life-threatening storm surge” — as high as 11 feet (3.35 meters) near New Orleans and 15 feet (4.5 meters) around the mouth of the Mississippi River — when the hurricane makes landfall.

It warned of “catastrophic wind damage” and said Ida could spawn tornadoes.

Louisiana has declared a state of emergency in preparation for the storm. The emergency declaration, approved by Biden, will expedite federal storm assistance to the southern state.

The hurricane made landfall late Friday in western Cuba as a Category One storm, packing winds near 80 miles per hour but causing mostly minor damage. 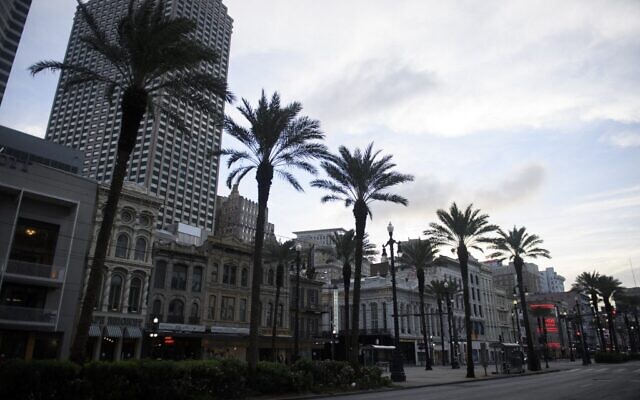 Palm trees along Canal Street in New Orleans, Louisiana on August 28, 2021 before the arrival of Hurricane Ida. (Photo by Patrick T. FALLON / AFP)

The dire warnings about Ida inevitably sparked memories of Katrina, Governor Edwards said in a briefing.

“It’s very painful to think about another powerful storm like Hurricane Ida, making landfall on that anniversary,” he said.

One big difference, he said, was the huge investment since then in an extensive storm protection system of levees, gates and pumps.

Still, Eric Suriano, the watchmaker, remembers Katrina vividly: “It was the nightmare of my life.”

Meantime, a Category One hurricane named Nora made landfall on Mexico’s Pacific coast, according to the National Hurricane Center.

Nora’s center “remains near the coast of Mexico after making landfall in the northwest Jalisco” province, the center said.

Scientists have warned of a rise in cyclone activity as the ocean surface warms due to climate change, posing an increasing threat to the world’s coastal communities.