Former Yisrael Beytenu Knesset member Faina Kirshenbaum was sentenced Wednesday to 10 years in prison for her role in arranging a wide-reaching kickback scheme considered one of the largest political corruption cases in years.

In handing down the sentence, which is years more than other senior politicians have received for graft convictions in the past, the Tel Aviv District Court accepted the prosecution’s arguments in full and said Kirshenbaum’s conduct had been systematic and uniquely large-scale.

She is one of the main figures in a far-reaching corruption investigation into the Yisrael Beytenu party, which has been chaired by current Finance Minister Avigdor Liberman since he founded it in 1999. Liberman himself is not a suspect in the case.

Judge Yaron Levy said Kirshenbaum had taken bribes in a “systematic, cunning and sophisticated” manner over six years from eight separate, unconnected sources, amounting to some NIS 2 million ($604,415), repeating comments he made when he announced the verdict. The benefits and cash were used by Kirshenbaum, members of her family, confidants and the Yisrael Beytenu party, he said.

As the Yisrael Beytenu official in charge of coalition funds, Kirshenbaum “exploited her leadership power to illegitimately favor her personal interests.”

“The depth of the defendant’s corruption and the severity and multiplicity of her actions are unique,” Levy said.

Kirshenbaum “skillfully developed an endless variety of ways and excuses to circumvent the rules of proper administration and use public money as if it were her own,” Levy said, noting that she wielded “great power” over millions of shekels every year.

The court also sentenced former Agriculture Ministry director-general Rami Cohen to 30 months behind bars for assisting Kirschenbaum in the scheme. He was previously convicted of bribery and money laundering for his role. 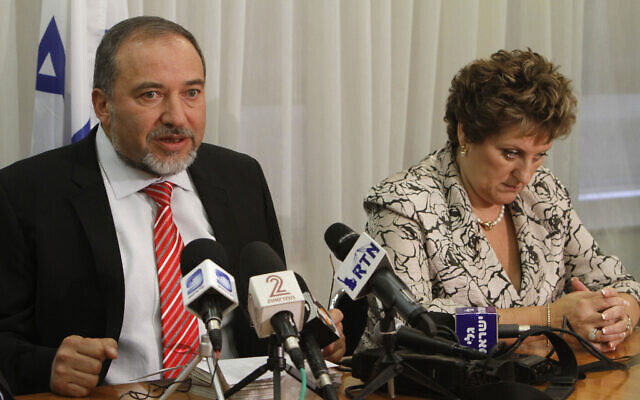 Previously the party’s director-general, Kirshenbaum was elected to the Knesset in 2009 and served as deputy minister from 2013 to 2015. She resigned shortly after she was named as a suspect in the investigation.

She was accused, along with former party headquarters chief David Godovsky, of inappropriately funneling large sums of money to various organizations. In return, those groups allegedly made nepotistic appointments, and also circulated some of the favors back to public service officials in the form of cash kickbacks and benefits.

In July 2018, the Tel Aviv District Court sentenced Godovsky to seven years in prison after he was convicted of four counts of taking bribes, three of money laundering, and two of requesting bribes.

The three-year investigation became public in December 2014 with the arrest of 36 serving and former officials. So far 17 people have been convicted in what is known as Case 242.

The most prominent public official to be felled by the probe was former tourism minister and Yisrael Beytenu lawmaker Stas Misezhnikov, who was sent to prison in October 2017 for a 15-month term after he was convicted of attempting to secure employment for his romantic partner in 2012 by funding a student festival in Eilat using ministry funds. Organizers of the festival paid the woman tens of thousands of shekels, while the ministry’s funding came to some NIS 1 million ($305,000).