“If the Palestinian people commit to giving us enough seats [in the legislature], we can make a commitment to changing the existing order,” Dahlan said.

Dahlan is widely seen as a possible contender to replace 84-year-old Palestinian Authority President Mahmoud Abbas. A former Fatah chief and an ex-PA security minister, Dahlan was expelled from the West Bank in 2011 following a bitter and bloody political dispute with the Ramallah government.

Dahlan, who rarely gives interviews, used his screen time on Wednesday night to lay into Abbas, whom he accused of “normalizing despair among Palestinians.”

“Abbas made three promises: to reform Fatah and strengthen it, to reform the Palestinian Authority, which he said at the time was corrupt… and to make an honorable peace [with Israel]. He didn’t do any of those three,” Dahlan said.

Dahlan claimed that many of the technical problems facing Palestinians — such as the Gaza Strip’s long-running electricity crisis — could be resolved easily were it not for the personal divisions between the Palestinian leadership in Ramallah and Gaza.

“One of my business associates could resolve it easily. This isn’t such a big deal — we’re not talking about some enormous grant. It is the political divides and personal rifts that have — and I’m sorry to put it like this — turned the Palestinian people into beggars,” Dahlan said.

Hamas’s victory led to a year-and-a-half struggle for power, which ended in 2007 with the establishment of two rival Palestinian governments: Hamas in Gaza and the Fatah-dominated Palestinian Authority in the West Bank.

The Palestinians are set to see national legislative elections on May 22 and a presidential vote on July 31. Observers remain skeptical that the elections will actually take place, however, as several election promises have fallen through before.

Senior Hamas official Mousa Abu Marzouq told al-Jazeera in February that Hamas did not plan to run a candidate against Abbas, although other Hamas leaders later said that he was not expressing the movement’s official position.

Dahlan charged that both rival Palestinian movements were conspiring to allow the aging Abbas to run unopposed in the election.

“He has agreed with Hamas to be the sole, consensus candidate in the upcoming elections as if he were 40 years old and his future was ahead of him,” Dahlan said.

Without elaborating as to whether he would run himself, Dahlan said he would not allow it.

“Abbas will not be the only presidential candidate in the elections,” he said, adding that he “did not want to get ahead of events.” 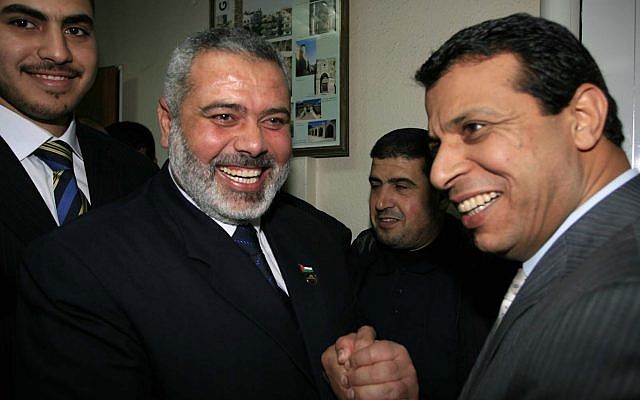 Since his 2011 ejection from the West Bank, Dahlan has resided in the United Arab Emirates. He is said to have become a close confidant of Abu Dhabi Crown Prince Mohammad bin Zayed, the Emirates’ de facto ruler.

Officials in Ramallah have blamed the UAE’s decision to normalize ties with Israel last year on Dahlan’s influence.

In his Wednesday interview, Dahlan denied the accusation. But he also declined to criticize the UAE’s decision to normalize relations with Israel, which he said the UAE made for “its own sovereign reasons.”

“I am proud of being in the United Arab Emirates. The UAE has a long history of aiding the Palestinian people,” Dahlan said.

Opinion polls show little popular enthusiasm for the former security chief. In a poll conducted by the Palestinian Center for Policy and Survey Research, just 7% of Palestinians said they supported Dahlan.

Around 22 percent, by contrast, supported Marwan Barghouti. Barghouti is currently serving multiple life sentences in an Israeli prison after he was convicted of masterminding a string of suicide bombings against Israeli civilians and soldiers. 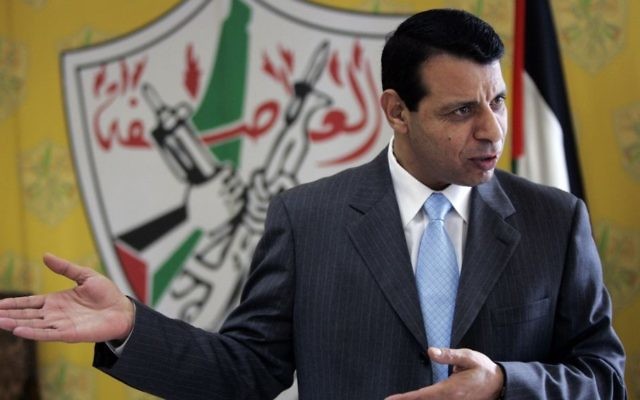 Mohammed Dahlan during an interview with The Associated Press in his office in the West Bank city of Ramallah, on January 3, 2011. (AP Photo/Majdi Mohammed, File)

But Dahlan has both a loyal following in the Gaza Strip, where he was born, and a rising regional patron in the UAE. With Abu Dhabi’s backing, Dahlan’s movement has quietly funded aid projects in the Gaza Strip and in East Jerusalem over the past several years.

The Palestinians have lagged behind in coronavirus vaccinations, with only around 70,000 doses reaching the Palestinian Authority. An additional 90,000 Palestinians who work in Israel have also been vaccinated by Israeli authorities.

Dahlan’s movement organized an additional 60,000 Sputnik V vaccines from Abu Dhabi to Gaza in two shipments; the most recent one arrived last Thursday. Dahlan said he had offered to send doses to the West Bank, but had been turned down.

“We are prepared to send as many vaccines [as we sent to Gaza] to the West Bank. But, as you know, he is willing to accept from Israel, but not from me,” Dahlan said.