Concerns are mounting about the ability of the already stretched National Health Service to cope with the anticipated increase in people seeking treatment for COVID-19 infections over the coming weeks that could be further fueled by holiday gatherings over Christmas and New Year’s.

On Friday, the UK recorded another 53,285 new infections, down slightly from the previous day’s record high of 55,892. Although comparisons with the outset of the pandemic are difficult given that testing was limited in the spring, the UK has recorded its four highest daily new infection numbers over the past four days — all above 50,000 and around double the daily number of a few weeks ago.

The Royal College of Nursing’s England director, Mike Adams, told Sky News that the UK was in the “eye of the storm” and that it was “infuriating” to see people not following social distancing guidance or wearing masks.

A leading physician also warned of burnout among health workers on the front line in hospitals, while also urging people to follow the rules.

“I am worried,” Adrian Boyle, vice president of the Royal College of Emergency Medicine, told the BBC. “We are very much at battle stations.”

The spike in new cases is said to be due to a new, more contagious variant of the virus first identified around London and the southeast of England.

Given the time lags between new cases, hospitalizations and COVID-19 deaths, there are huge concerns about the path of the pandemic over the coming month or two. Britain already has Europe’s second-highest virus death toll at 74,125 after another 613 deaths were recorded Friday. The country looks set to overtake Italy and become Europe’s worst-hit country once again.

As a result of the spike in new infections, which has prompted even tighter lockdown restrictions, British authorities have changed their strategy for rolling out coronavirus vaccines, choosing to get more people an initial vaccination shot as soon as possible, and delaying the second dose for up to three months.

Currently, two vaccines have been approved for use in the UK and both require two doses per person.

Around 1 million people have received the first dose of the vaccine developed by American pharmaceutical firm Pfizer and German biotechnology company BioNTech, with a small minority also getting the second dose as planned after 21 days. 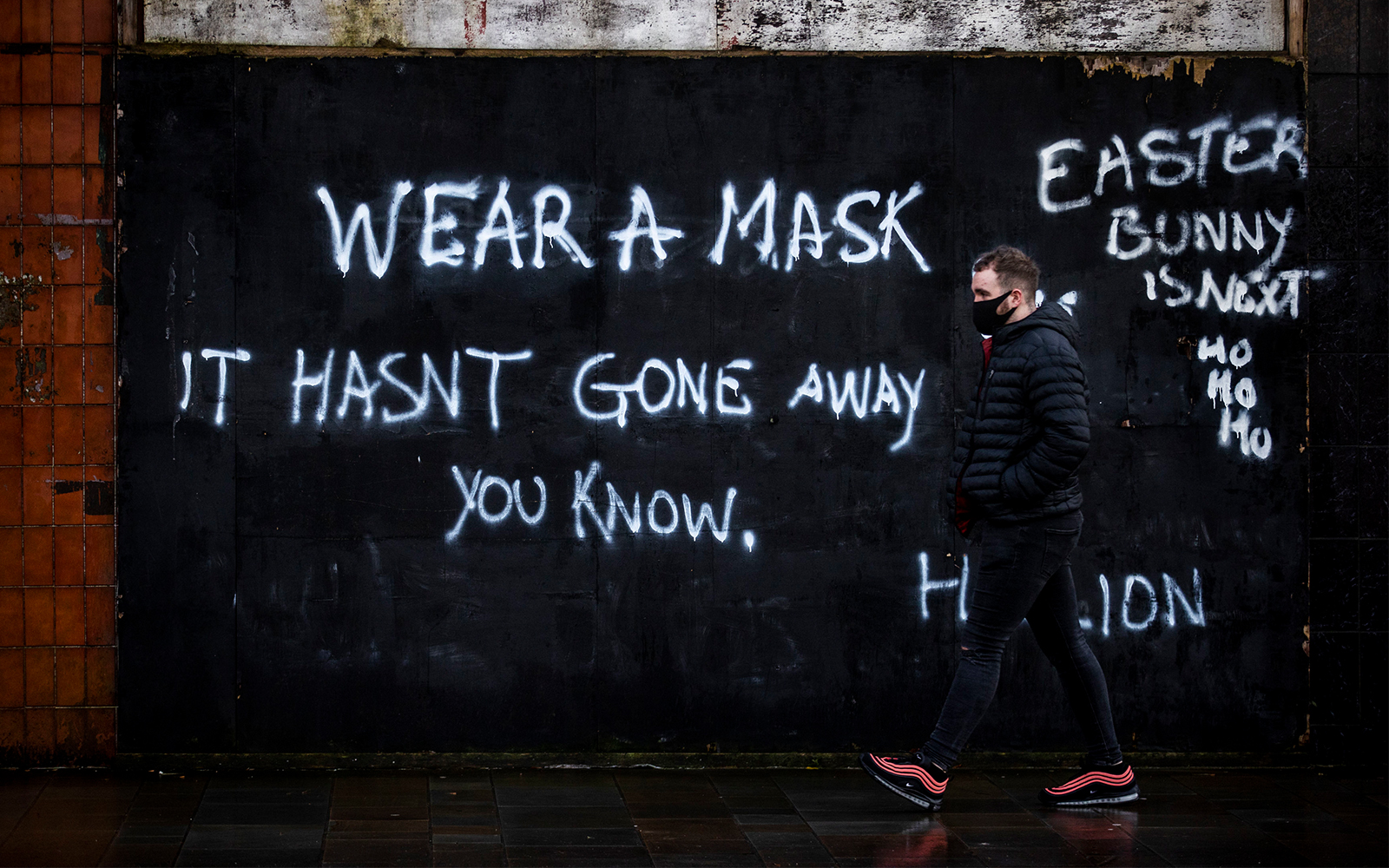 A man wearing a face covering walks past graffiti in Belfast, January 1, 2021. (Liam McBurney/PA via AP)

Earlier this week, Britain also approved a vaccine developed by the University of Oxford and British pharmaceutical firm AstraZeneca that is substantially cheaper and easier to use.

Authorities then outlined the new dosing regimen, which delays a person’s second vaccine shot from being done at three weeks to being given up to 12 weeks after the first shot.

“In the short term, the additional increase of vaccine efficacy from the second dose is likely to be modest. The great majority of the initial protection from clinical disease is after the first dose of vaccine,” the medical officers said.

Still, the new plan has faced some criticism. The UK’s main union for doctors warned that delaying the second dose causes huge scheduling problems for thousands of partially vaccinated elderly and vulnerable people.

“It is grossly and patently unfair to tens of thousands of our most at-risk patients to now try to reschedule their appointments,” said Richard Vautrey from the British Medical Association.