It was hard not to be charmed by Ezra Gorodesky, the understated star of multiple video clips and newspaper articles. Into his 90s, he remained spry with a sly sense of humor.

“I have a very rare disease” – he would announce dramatically and pause – “it’s collecting. And I thought if I’d give my collection to the Library it would be a cure and I wouldn’t need to collect anymore. But interestingly, the next day I bought a book. So I guess there’s just no cure.”

Ezra began collecting as a 10-year-old boy in Philadelphia, starting with miniature books and then branching out to ABC and Alef-Bet primers, synagogue dedication booklets, and unusual prayers, including ones composed for Napoleon and Montefiore. In later years he developed sizeable collections of tea tins, books, and paraphernalia, and buttons. The latter collection is now housed at the Shenkar College of Engineering, Design, and Art.

Ezra was a Zionist from an even younger age. When he was two years old he fell in love with picture books of the Land of Israel. The first exhibits of his collections – haggadot and miniature books – were put on display at the Philadelphia Free Library in 1957.

In 1960, Ezra came to Israel for a first visit and stayed, settling in Jerusalem and renouncing his American citizenship. The National Library of Israel’s current home on the Givat Ram campus was completed later that year, and Ezra has been a dedicated friend of the Library through the many years since. 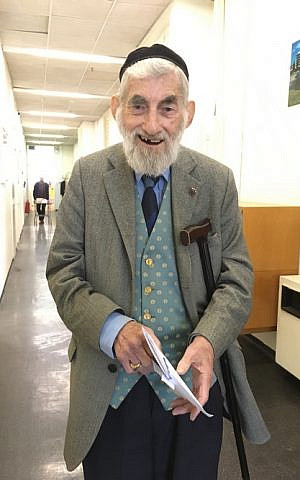 Ezra P. Gorodesky during one of his regular visits to the National Library (Aviad Stollman / courtesy)

Until the closures caused by the pandemic, Ezra would come to the Library at least every couple of weeks “just to look at the Ardon Windows.” He personally knew all of the Library directors and often declared the need for the creation of an official national library, when today’s National Library of Israel was known as the “Jewish National and University Library,” and had a significantly less extensive mandate than it does today:

I’ve always said things; sometimes they come true, sometimes they don’t. This one came true. Every nation has a national collection and a national library. We lost many books because there was no national depository. Things were sold to bookstores. Researchers and collectors took books.

Ezra was especially known for a very unusual science he developed to perfection – the purchasing of old books and the taking apart of their bindings to reveal manuscript fragments within. In 16th-18th century Europe, paper and parchment from existing books (including countless Jewish books confiscated by the Church) were often used for the binding of new ones, creating a hidden trove or, some might say, a genizah of Hebrew-Jewish texts.

Through this method, Ezra discovered and brought to life more than 200 fragments that otherwise would never have been known to the world, some extremely rare and extremely valuable. 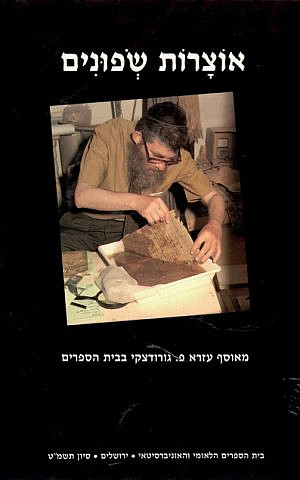 The cover of “Revealed Treasures: From the Ezra P. Gorodesky Collection in the J.N.U.L.” featuring an image of Ezra inspecting a book binding

In the late 1980s Ezra decided that his collection of manuscript fragments, along with unique Jewish publications and ephemera, needed a permanent home where it would be accessible to the public. Nobody yet knew the treasures it contained:

When I decided to give my collection to the National Library I came in and spoke to the director. He said, ‘Maybe you just want to keep your collection.’ So I went to Rafi Veiser and Rivka Pleser in the Manuscripts and Archives Department. They said, ‘Bring in 30 pieces, and we’ll pick out what we want to keep.’ The next week I brought in 50 pieces, and they took them all. This went on week after week. Of well over 900 pieces I brought to the Library, they turned down two. Also, they told me in advance, ‘Just know, there will not be an exhibition or a catalog.’

Some 30 years later, Ezra’s collection has been the focus of three NLI exhibitions and a catalog, “Revealed Treasures from the Ezra P. Gorodesky Collection in the J.N.U.L.,” published in 1989. The 2012 International Jewish Curators Conference at the National Library featured a dinner honoring Ezra for his contributions. 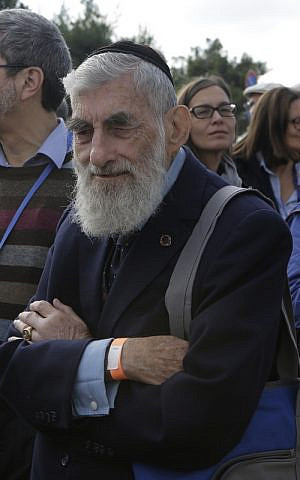 Over the years, Ezra donated other treasures, including a collection of 1,300 family photographs and an antique original printing press from 1860s England, which has long been on permanent display in the National Library lobby. Years earlier, in 1966, he entrusted the personal archives of his dear friend, Rebecca Affachiner, to the Central Archives for the History of the Jewish People (CAHJP), which is now part of the National Library of Israel.  One of Ezra’s prized possessions was the handmade Israeli flag Affachiner flew on May 14, 1948, which earned her the title of “Israel’s Betsy Ross.” The flag was donated to Ben-Gurion University of the Negev a few years ago. 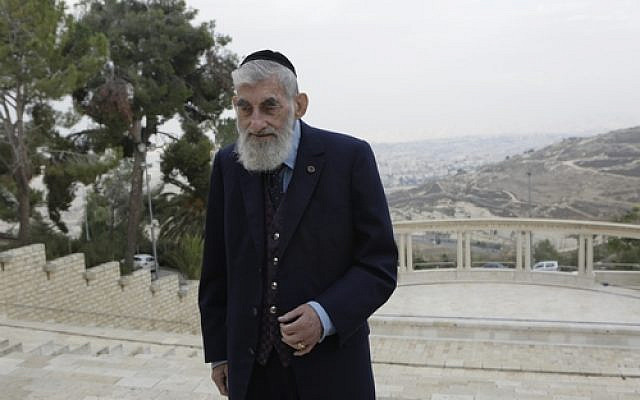 Many of the pieces Ezra collected and donated to the Library were worth considerable sums of money, but he never asked for even a shekel for any of it. When people expressed amazement at his generosity to the Library he replied:

If God gave me the power to build a collection with little money, who am I to sell it?  It’s kind of a chutzpah not to donate something the Library doesn’t have. I’m not a hero, I’m a Gorodesky. I was raised to do the right thing… I think it’s an honor that the Library was big enough to take a little nobody’s collection and build it up.

This article first appeared on “The Librarians“, the official online publication of the National Library of Israel. Check it out for more Jewish, Israeli, and Middle Eastern history, heritage and culture.

Naomi Bloom Wurtman is coordinator of resource development and external relations at the National Library of Israel.