Facebook removed a major group promoting conspiracy theories about the COVID-19 vaccines that in recent weeks urged its thousands of members to schedule appointments to inoculate only to cancel them at the last minute, forcing HMOs to throw out unused doses, the company said Sunday.

The Hebrew-language group was called “No to the green passport,” referring to a document that will enable vaccinated people to attend certain public venues and events and potentially travel abroad without quarantine.

Many of its 14,000 members made use of the group to promote unfounded allegations that the vaccine is harmful.

Facebook said that the group violated its community standards regarding fake news.

In one post reported last week by Channel 13 News, a group member wrote “If everyone who does not plan on getting vaccinated makes an appointment to vaccinate and then doesn’t come, we’ll finish the stock (in the trash) really quickly. Just saying”

The development came after the Health Ministry reportedly asked Facebook to take down the posts of anti-vaxxers bragging about their exploits. The social media giant has pledged to keep anti-vaxxers and those spreading fake vaccination information off its platform but is failing to do.

On Friday a law enforcement official told Channel 12 News that police were considering weighing opening a criminal investigation into those anti-vaxxers who had been scheduling appointments with the intention of cancelling them.

There are several dozen anti-vaxxer activists that have led a campaign on social media encouraging others not to inoculate, Channel 12 said.

Health Minister Yuli Edelstein said last week that the phenomenon is limited, but those trying to disrupt the vaccination drive were “a dangerous group who are ideologically opposed, like a cult.”

However a senior official in the country’s largest health provider said Sunday that the pace of inoculations has dramatically slowed, accusing online “fake news” of promoting vaccine skepticism. 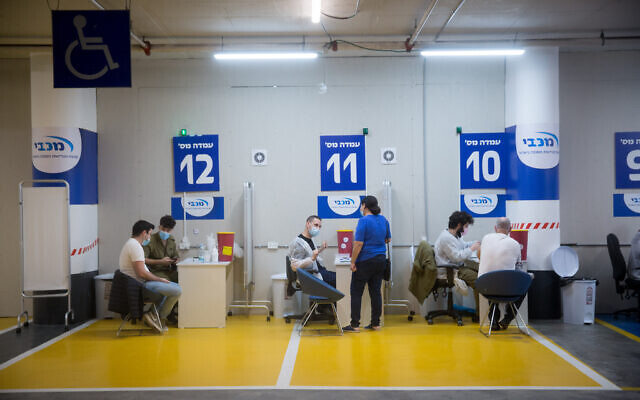 Israelis receive a COVID-19 vaccine, at a Maccabi Health vaccination center at the Givatayim mall, outside of Tel Aviv, February 04, 2021. (Miriam Alster/Flash90)

Israel has made its rapid, mass vaccination drive a central strategy it is efforts to end the coronavirus outbreak and has so far given the first of the two-shot Pfizer/BioNTech inoculation 3,480,406 people, and 2,081,509 have received the second. The country aims to have vaccinated all those over the age of 16 by the end of March.

Since the start of the outbreak early last year 692,101 people have been diagnosed with COVID-19 and there have been 5,121 deaths, according to Health Ministry figures released Monday.

There were 67,651 active patients in the country.