BEIRUT — Lebanon’s new prime minister-designate Najib Mikati held consultations on Tuesday with political parties that he said “unanimously” agreed on the need to put together a government quickly to rescue the crisis-hit country.

But after nearly a year of extreme drift, an economic crisis described by the World Bank as one of the world’s worst since the 1850s, and continued squabbling among political players, he faces an uphill battle.

Mikati, a billionaire who has already twice served as prime minister, took on the task on Monday, days after fellow veteran politician Saad Hariri threw in the towel.

The last government resigned amid public outrage over a deadly explosion of hundreds of tons of poorly stored fertilizer at Beirut port last August.

The institutional vacuum is holding up a potential financial rescue plan for the country, which defaulted on its debt last year.

“There was unanimous agreement from all blocs and lawmakers on the need to speed up the process of cabinet formation,” Mikati said after consultations ended.

The meetings are the customary official step that follows a new prime minister’s designation, but the high-stakes horse-trading has yet to even begin.

Smoke rises after an explosion the day before at the seaport of Beirut, Lebanon, on August 5, 2020. (AP Photo/Hussein Malla)

Following a meeting with Mikati, Hezbollah lawmaker Mohammad Raad said his party is ready to “cooperate seriously” with the new PM-designate.

FPM chief Gebran Bassil, accused by critics of repeatedly obstructing previous efforts to form a new government, said his party would stand aside this time.

We will “not participate in the next cabinet, which means we will not get involved in the formation process.”

In an interview with the An-Nahar newspaper, Mikati vowed his lineup would be “purely technical” and tasked with bridging the gap to elections due next year.

“The government will consist of specialists,” Ferzli said. “As for the nominating process, it will rest on Mikati and his agreements with the president.”

The designation of 65-year-old Mikati, Lebanon’s richest man and to many a symbol of its corrupt oligarchy, was met with general skepticism. 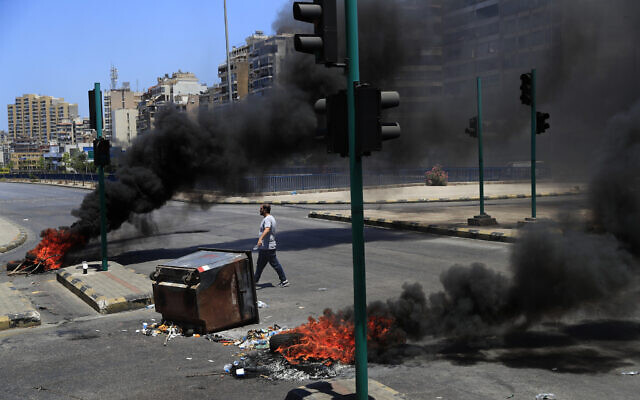 In this June 17, 2021 photo, a protester passes burning tires and garbage containers blocking a main highway during a protest against the increase in prices of consumer goods and the free fall of the local currency, in Beirut, Lebanon. (AP /Hussein Malla)

A native of Tripoli, Lebanon’s second city and one of its poorest, he was accused by a state prosecutor in 2019 of illicit enrichment, a charge he denies.

“How can I trust a thief who stole from me and my children and their future?” asked 57-year-old Beirut resident Mohammed Deeb, after Mikati’s designation.

“As long as this [political] class is still in power, nothing will change.”

On Sunday evening, dozens of protesters gathered outside Mikati’s Beirut home, accusing him of corruption and cronyism.

But Lebanon’s bickering politicians view Mikati as a consensus candidate, who may be capable of easing the near-year-long political deadlock.

Mikati, the third politician in a year to attempt the job, promised his government would work on implementing a French roadmap, conditioning a huge aid package on reform and transparency. 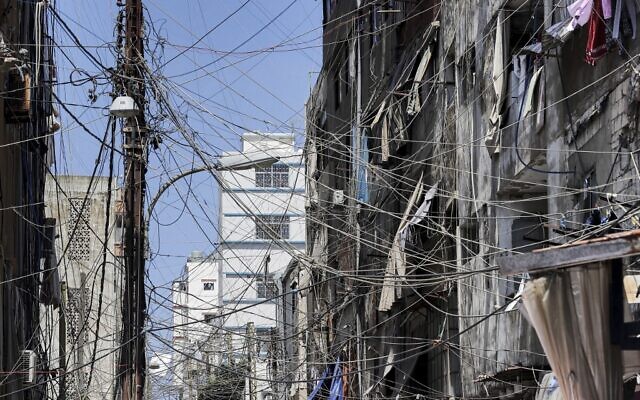 This photo taken on June 23, 2021, shows a view of a mesh of raised electricity lines along a street in a suburb of Lebanon’s capital Beirut. (JJoseph Eid/AFP)

In some of his first comments after his designation, Mikati said he would prioritize what little international aid is currently available towards addressing severe power blackouts, according to the Al-Akhbar newspaper.

Lebanon can no longer provide mains electricity to its citizens for more than a handful of hours each day, nor can it afford to buy the fuel needed to power generators.

Almost none of the international community’s demands for a broad program of reforms have so far been met.

Further stalling the bankrupt state’s recapitalization has been the government’s failure to engage the International Monetary Fund and discuss a fully-fledged rescue plan.

Until then, the monetary institution is due to send around $900 million, but experts warn it will not be enough and risks being misused.