JTA — At first, Danny Mintz was excited to learn that lawmakers in his state, Louisiana, were considering mandating Holocaust education in public schools.

A director at a good-government group called the Louisiana Budget Project, Mintz knew that the local Jewish federation was encouraging his synagogue’s board to back the bill. In a state where a notorious Holocaust denier, David Duke, had been the Republican candidate for governor in 1991, clearly there was a need for more Holocaust education.

But Mintz had second thoughts once he began learning more about the content and the backers of the proposed legislation. Its sponsor, a Republican state representative named Valarie Hodges, had also expressed hostility toward teaching the histories of other racial and religious minorities. Some of the original bill’s language seemed to suggest that lessons on the Holocaust would be framed partially as a celebration of the American military. And during debate, the bill’s supporters would “deploy Jews rhetorically, without involving Jews,” he said.

“As a Jew, I thought to myself, who are you who’s making this argument?” Mintz told the Jewish Telegraphic Agency.

He soon began telling fellow board members at Shir Chadash Conservative Congregation, in the New Orleans suburb of Metairie, that the bill was more complicated than it appeared.

The Shir Chadash board decided not to weigh in on the legislation. And it wasn’t alone: While the regional chapter of the Anti-Defamation League and the New Orleans Jewish Federation backed the bill, several of the state’s Jewish community leaders declined to endorse it.

Ultimately the bill died in the State Senate. Still, its short life was notable because of how it functioned as a front in the battle between right-wing white lawmakers and progressive Black lawmakers over critical race theory, an academic framework for teaching race and history that has become a target for conservatives at statehouses and school board meetings across the country.

The Holocaust education bill seemed potentially uncontroversial when Hodges introduced the measure in April. The original text simply called for “instruction regarding World War II and the Holocaust for middle and high school students and training for teachers relative to such instruction.”

Many Jewish groups have called for exactly that kind of requirement, arguing that education is the key to increasing tolerance and preventing genocides in the future. Currently, 17 states require some form of Holocaust education in schools. Louisiana, which one study pegged as having one of the lowest percentages of Holocaust-aware young people in the US, is seen as especially in need of similar mandates. The state also recently became the new home of the Museum of the Southern Jewish Experience, boosting the visibility of Jews in the region.

But as lawmakers held hearings on the bill, it became clear that many of its supporters had a different vision — starting with Hodges, an evangelical ex-missionary and prominent conservative who has served in the Louisiana State Legislature for a decade. Hodges initially accepted, then declined, an interview with JTA.

On her professional Facebook page during the bill’s debate period, Hodges shared an image of Hitler with a caption calling him “everything today’s liberal craves.” Another post compared Nazi Germany to critical race theory and the New York Times’ 1619 Project, writing, “World War II was about RACE, yet liberals objected to it being included in my bill … Hitler had been laying the groundwork for at least 15 years before the Holocaust. It began with the organization of college students who would be the ones to help him implement his reign of horror.”

Something to think about…

During hearings, Hodges made her arguments while seated beside David Barton, founder of the Texas-based advocacy group Wallbuilders, which aims to promote the idea that the US is an inherently Christian nation founded on biblical principles. The Southern Poverty Law Center identifies Barton as an “extremist” who is “a key bridge between the mainstream political right and radical-right religious ideology.”

No one representing a Jewish organization testified on behalf of the bill. One Jew who did was Ari Morgenstern, the senior director of policy and communications at the evangelical Zionist organization Christians United for Israel.

Also testifying was a Metairie resident named Dennis Burke, who did not identify himself as belonging to any organization but delivered a long statement inveighing against communism.

“To put it in Holocaust terms, the communists are now the Nazis and we are the Jews. They are the predators. We are the prey,” Burke testified at the debate while seated next to Hodges. “We need to teach this history to our future citizens so we don’t end up like the Jews.”

Besides the matter of how the bill was debated, some on the left also were alarmed by Hodges’s education record. In 2012 she publicly withdrew support for private-school vouchers in Louisiana after learning that parents would be able to direct tax dollars to Muslim schools as well as Christian ones.

“Unfortunately it will not be limited to the [US] founders’ religion,” she said at the time before falsely claiming, “There are a thousand Muslim schools that have sprung up recently.” 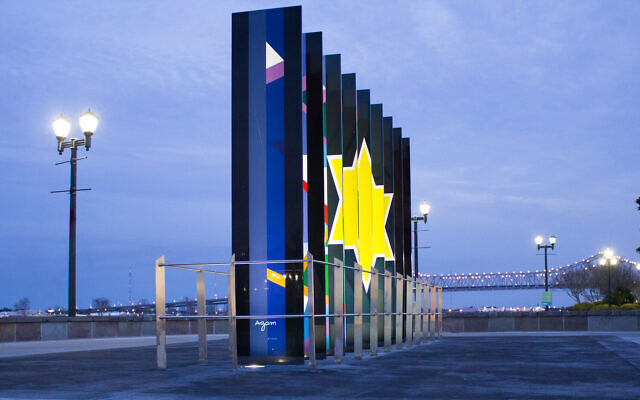 A view of the Holocaust Memorial in New Orleans. A Louisiana legislator recently abandoned a bill that would have mandated Holocaust education in the state after controversies over its language, origins and backers. (Dan Soto via Wikimedia Commons/ via JTA)

Earlier this year, Hodges threw her support behind a colleague’s bill aiming to prevent critical race theory and other “divisive topics” from being taught in schools and universities by barring teachers from telling students that either Louisiana or the US is “systematically racist or sexist.” The bill failed after its sponsor said that students should be taught about “the good, the bad, the ugly” of slavery, prompting bipartisan anger. (The bill itself was one of 26 efforts proposed or passed this spring nationally by conservatives on the state level alarmed by the prospect of critical race theory being taught in public schools.)

And the same month she proposed the Holocaust education bill, Hodges authored a piece of legislation that would require elementary and middle schools to teach “the founding principles of the US,” which the bill defined as “free enterprise system, the benefits of capitalism, private property, constitutional liberties, the value of a constitutional republic, and traditional standards of moral values.” (That bill is still pending, in amended form.)

“You’re saying, ‘You have to teach the history of Holocaust, but you can’t teach the history of institutionalized, deeply embedded racism in the United States,’” said Jim Grossman, executive director of the American Historical Association, a professional group for historians that has joined a statement opposing the new rollout of bills focused on restricting the teaching of certain ideas in history.

The irony is, you cannot understand the Holocaust without understanding institutional racism. Millions of Germans didn’t suddenly become antisemitic

Louisiana’s blending of Holocaust education into this larger debate is unique among the states pushing new race-based education guidelines — although Florida’s State Board of Education recently banned Holocaust denial alongside critical race theory as two examples of ideas that could “distort historical events.”

Hodges’s record and political orientation turned off some potential supporters.

“While we appreciate the impulse toward more Holocaust education, we also are distressed by the context in which this bill came forth,” said Rabbi Katie Bauman of Touro Synagogue, a Reform congregation in New Orleans.

The New Orleans Jewish Federation and the regional chapter of the ADL argued that Louisiana’s low Holocaust literacy is reason enough to support any plan for Holocaust education, regardless of who is behind it. In a letter to the State Senate, the two organizations argued that “the need for Holocaust and genocide education in our schools could not be more urgent.” They also noted Louisiana’s particularly low “Holocaust education score,” a state-by-state statistic calculated by the Conference on Jewish Material Claims Against Germany.

“We could not, as an organization, not be supporting Holocaust education,” Arnie Fielkow, CEO of the Jewish Federation of Greater New Orleans, told JTA. “That would have been a very bad message to the rest of the state.”

But several members of Louisiana’s Legislative Black Caucus argued that the bill’s focus on the Holocaust is exclusionary, especially following Republican attempts to restrict the teaching of the history of racism in the US.

“History includes us all,” Rep. Tammy Phelps, a Democrat from Shreveport and a member of the Legislative Black Caucus, argued during debate over the bill. “If we’re going to teach it, I think we’ve got to teach it all.”

Rep. Royce Duplessis of New Orleans quizzed Hodges about the history of the Middle Passage, in which people were abducted from Africa to the Americas as part of the transatlantic slave trade. Hodges replied that she was unaware of the history.

Duplessis told JTA that he unequivocally supports Holocaust education. But, he said, “when the Legislature makes it its business to cherry-pick certain areas that they find important — well, what about things other people find important?”

Attempts to broaden the bill’s focus initially met resistance. An amendment introduced by Rep. Ted James, a Democrat from Baton Rouge, also would have mandated teaching about significant figures from Black history. But that failed in the state house, as did one by Malinda B. White of Bogalusa that would have added material regarding women’s history.

“The majority of my colleagues don’t want to have a difficult conversation about race,” Duplessis said. “I don’t think it’s warranted, but they perceive it as a threat to their own livelihood, their own way of viewing the world, or the way they view their parents or their grandparents.”

Grossman, who is Jewish, classified the bill’s pivot to Holocaust education as “a blatant appeal to Jewish voters.”

He added: “This culture war is about white people. It’s about scaring white voters. And Jews are white. By invoking the Holocaust, what some of these politicians seem to be doing is saying to Jews, ‘We’re on your side.’ And they’re not.”

By invoking the Holocaust, what some of these politicians seem to be doing is saying to Jews, ‘We’re on your side.’ And they’re not

Some amendments to the bill did pass. One broadened the scope of required instruction to include the internment of Japanese Americans and the contributions of “the Tuskegee Airmen and other African American soldiers and Asian American soldiers” to the war effort. Another made the elected state Board of Education, not any body appointed by lawmakers, responsible for enforcement.

That latter point was important to some of the bill’s critics.

“Because I care so deeply about Holocaust education, I want to make sure that the right part of the government, that can make the most meaningful teacher training programs and curricular requirements, should be responsible,” said Davida Finger, a Jewish law professor at Loyola University New Orleans who has served on the advisory council for the local federation’s multicultural outreach initiative.

“We do feel it’s important that the broader community confront the reality of the Holocaust and the specific impact it had on the Jewish people,” she said. But, Bauman added, she was not interested in monopolizing the historical conversation, saying “We feel very strongly that we want to be in solidarity with other marginalized groups.”

The amendments made the bill more palatable for some of its initial critics, but not for Hodges. The legislator wrote on Facebook that the changes had “gutted the bills.” She stopped pushing the legislation, meaning it did not get the vote it would have needed to become law.

“I think this one was amended in a way where the author felt like there was no need to push it,” Duplessis said. “The amendments that were made effectively gutted the bill, so she just felt like it wasn’t even worth it. I don’t know all of the inside politics, but that’s my guess.”