PARIS (AFP) — French far-right pundit Eric Zemmour is inching closer to announcing a run for the presidency, a move that would create fresh uncertainty around next year’s election race.

Zemmour and the channel he works for, CNews — derided by critics as a “French Fox News” — announced Monday that the 63-year-old would step down from his role as a prime-time commentator.

The move was sparked by France’s CSA media regulator ruling last week that Zemmour should be considered a politician, not a journalist, meaning his access to TV and radio should be subject to limitations.

“I’m sad,” Zemmour said on Monday, while declining once again to rule out a run for the presidency. “I think it was inevitable. I think the CSA did it on purpose, did it voluntarily.”

Known for his anti-immigration and anti-Muslim rhetoric, Zemmour has been teasing about his political ambitions since the start of the year, and is to begin a national book tour this week “to meet the French people.”

He is also reported to be seeking financial backing for his candidacy, while posters have appeared around Paris and other cities bearing his face and the slogan “President Zemmour.”

French writer, politician, and journalist Eric Zemmour acknowledges applauses after his speech at the Convention of the Right, in Paris, September 28, 2019. (AP Photo/Michel Euler)

Analysts have speculated about how his entry would shake up the race, with most seeing him as likely to siphon votes away from far-right candidate Marine Le Pen and the right-wing Republicans party.

Voter surveys currently show that President Emmanuel Macron, 43, remains the narrow favorite in the polls in April next year, but the contest remains highly unpredictable.

Zemmour, who has been convicted for inciting racial hatred, is more radical than Le Pen, talking openly about the battle between Christian and Muslim influences in France, and calling Muslim immigrants “colonizers.”

In a recent outburst on CNews that led to a fine from the CSA, he called unaccompanied child migrants “thieves, killers… (and) rapists.” 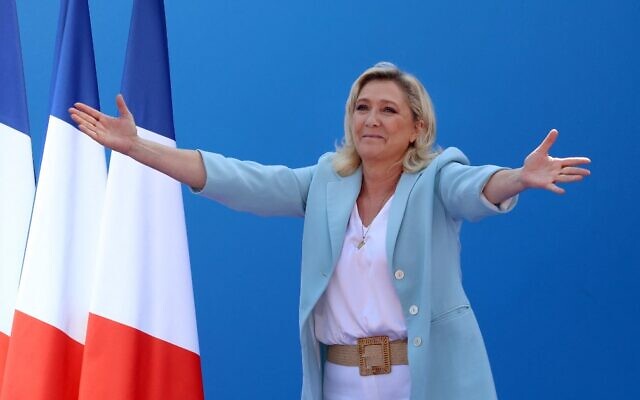 Polls suggest Zemmour, who is of Algerian Jewish background, would win around seven percent in the first round of the presidential election, if it were held today, meaning he would be eliminated.

His appeal is based on his ultra-nationalist views, coupled with his image as a public intellectual and anti-elitist political outsider.

Louis Aliot, a senior figure in Le Pen’s National Rally party, said recently that Zemmour was “not in a position to win. On the other hand, he can be a stone in Marine Le Pen’s shoe.”

Nicolas Lebourg, a historian specialized in the French far-right, sees him as being able to appeal to people who have not voted for the far-right before.

“The paradox of Eric Zemmour is that he is attractive both to the bourgeois classes who are meant to be put off by radicals, as well as more radical people… who find that Le Pen is too soft,” he said.

But his stigmatizing comments about Muslims, his apocalyptic vision of the future, and his racially charged arguments are also a turn off for most of the electorate.

“Today, Zemmour talks about the issues that he cares about, but if he’s a candidate then he’ll have to respond to questions on the economy, education, and social issues,” said Bernard Sananes, head of the Elabe polling group. 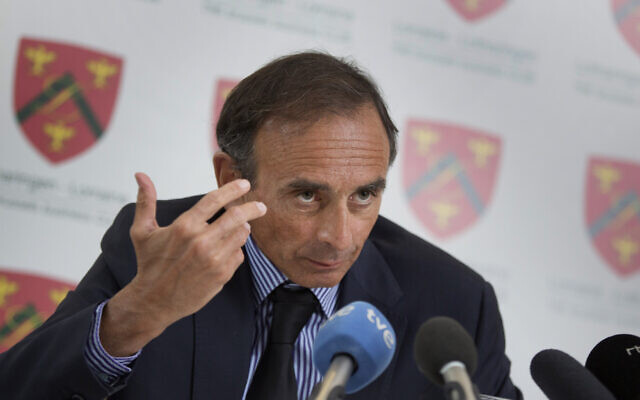 Eric Zemmour speaks during an event in Brussels on January 6, 2015. (AP Photo/Virginia Mayo)

In May, investigative news site Mediapart reported how several women had alleged inappropriate conduct from the married father of three. No legal complaint has been lodged against him.