Police on Wednesday barred far-right Religious Zionism MK Itamar Ben Gvir from a planned visit to the Temple Mount in Jerusalem’s Old City on Thursday amid fears he could reignite violence in the city and beyond.

The Knesset Guard informed Ben Gvir that Police Commissioner Kobi Shabtai had decided to prevent his visit, intended to protest the postponement of a flag march through the city by nationalist Jewish groups and a refusal to let them march through the Damascus Gate and Muslim Quarter.

“It’s the end of democracy,” Ben Gvir responded. “They are harming the immunity of members of Knesset.”

Ben Gvir said Shabtai “failed to quell the rioting in Lod, in the south, and on the Temple Mount, and now with an unprecedented decision is harming my immunity,” referring to Jewish-Arab riots last month amid the 11-day Gaza conflict.

Ben Gvir and Yamina MK Amichai Chikli were turned away from the Temple Mount Tuesday after failing to coordinate their visits with the Knesset Guard and the Shin Bet security service.

Religious Zionism MK Itamar Ben Gvir is blocked by Israel Police as he tries to go up to the Temple Mount in Jerusalem’s Old City, June 8, 2021. (Olivier Fitoussi/FLASH90)

Lawmakers are required to notify of planned visits to the Jerusalem holy site 24 hours in advance.

The Temple Mount is the holiest place in Judaism, as the site of the biblical Temples. It is the site of the third-holiest shrine in Islam, the Al-Aqsa Mosque, and has been a frequent flashpoint of violence.

Israel captured the Temple Mount and Jerusalem’s Old City in the 1967 Six Day War and extended sovereignty throughout Jerusalem. However, it allowed the Jordanian Waqf to continue to maintain religious authority atop the mount, where Jews are allowed to visit under numerous restrictions, but not to pray.

The high-level security cabinet on Tuesday evening announced the contentious flag march planned in Jerusalem would be permitted to take place in one week, if police approve the route.

The compromise proposal brought forward by  Netanyahu and Defense Minister Benny Gantz and approved by ministers confirmed the event can go ahead “within a framework that will be agreed upon by police and organizers,” according to a statement released Tuesday.

The rescheduling to the following Tuesday, June 15, places the march two days after the Knesset votes to approve a new government removing Netanyahu from power, allaying concerns by some critics of the prime minister that he was hoping to use the march and the violence it could potentially spark as part of a final bid to prevent the formation of the new coalition.

Police had initially refused to authorize the event, which was set to follow a path through the Old City’s Damascus Gate entrance and Muslim Quarter, concerned of the potential for the parade to inflame tensions in the city and spark a fresh wave of unrest there, and potentially in other locations. 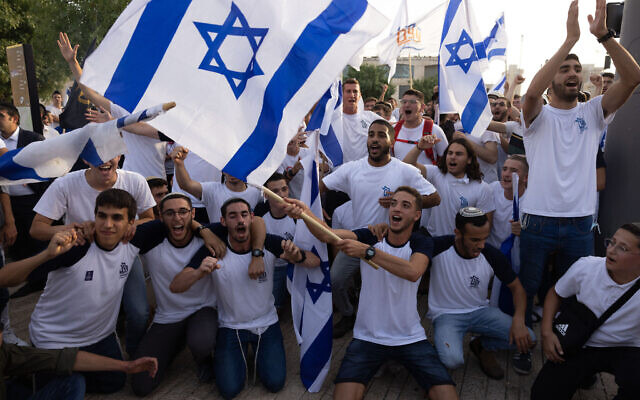 Participants in the Flag March in Jerusalem’s Old City on May 10, 2021. (Nati Shohat/Flash90

The Hamas terror group had warned of “consequences” if the march passed through Damascus Gate.

The original flag march on May 10 was stopped short by rocket fire from Hamas at Jerusalem, which sparked an 11-day bout of intense fighting.

Ben Gvir has repeatedly been accused of deliberately stoking unrest.

Last month Shabtai reportedly told Netanyahu that Ben Gvir was responsible for much of the violence that engulfed Jerusalem and the mixed Jewish-Arab cities.

During a briefing, Shabtai said that every time police appear to be getting an area under control, Ben Gvir shows up to fan the flames, Hebrew media reported.

“The person who is responsible for this intifada is Itamar Ben Gvir. It started with the Lehava protest at Damascus Gate,” Shabtai said, referring to far-right demonstrations around Jerusalem’s Old City. “It continued with provocations in Sheikh Jarrah, and now he is moving around with Lehava activists.”

Ben Gvir ceremoniously moved his office earlier last month to the East Jerusalem neighborhood of Sheikh Jarrah, where there has been international outcry due to Israeli plans to evict Palestinian families and hand over the homes to Jews who had proven their pre-1948 ownership. 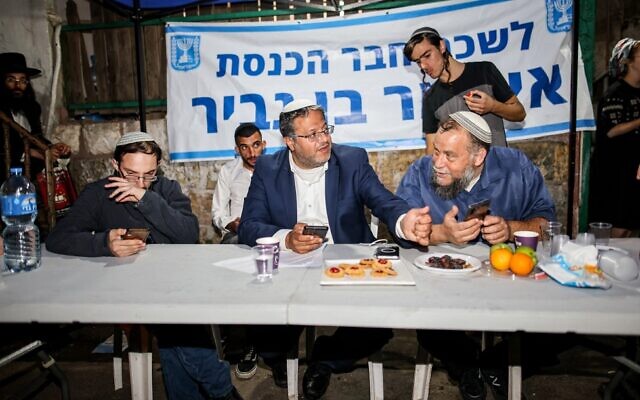 Far-right MK Itamar Ben Gvir (C) eats dried dates as he sits at the table in his make-shift ‘parliamentary office’ (as described in Hebrew in the sign behind), in the Sheikh Jarrah neighborhood of East Jerusalem, on May 6, 2021. To Ben Gvir’s left is Bentzi Gopstein, head of the extremist Lehava group. (Ahmad Gharabli/AFP)

He is part of the Knesset bloc supporting Netanyahu, who worked to get Ben Gvir into the parliament by arranging a merger between Bezalel Smotrich’s Religious Zionism and Ben Gvir’s Otzma Yehudit faction. Lehava is also affiliated with Otzma Yehudit.

Violence between the Jewish and Arab communities spiraled from confrontations in Jerusalem surrounding the month-long Muslim month of Ramadan and clashes on the Temple Mount, and came to a head as Israel engaged in an 11-day clash with terrorist groups in the Gaza Strip.

The two activists, Bentzi Gopstein and Baruch Marzel, refused to cooperate with investigators, claiming they were victims of “a political witch hunt,” and were later released after questioning.

A police statement said the investigation by the Lahav 433 cybercrime unit was approved by the State Attorney’s Office and that the two were questioned over social media content “that allegedly call for racism.”

Gopstein is the head of the extremist anti-miscegenation group Lehava. Both he and Marzel have been previously banned from running for the Knesset as part of the far-right Otzma Yehudit party.

The two were reportedly questioned over a series of videos dating back to 2018 in which they called for violence against those that intermarried. One of the videos called to “strike down the enemies of Israel like God struck the Egyptians with the 10 plagues.”

Speaking after the interrogation, which took place in the city of Lod — recently the scene of violent Jewish-Arab clashes — Gopstein said police should have instead been looking for Arab leaders who “incited the city to burn, calling the masses to kill Jews.” 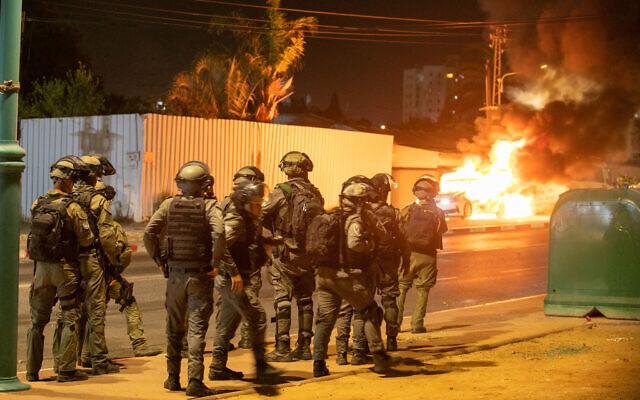 “Instead they are investigating me because I put out some videos against intermingling and called on girls not to go out with ‘goyim,’” he said, referring to non-Jews.

He accused police of trying to please the incoming new government and carry out “a political witch hunt.”

Marzel called police “clowns” and said the investigation was a “farce.”

Lehava opposes assimilation and intermarriage between Jews and non-Jews, as well as LGBT rights, and tries to stifle any public activity by non-Jews in Israel, including coexistence events. Lawmakers across the political spectrum have tried to designate it as a terrorist group.