StoreDot, a maker of fast-charging battery technology for electric vehicles, said that NASA has given it approval to conduct what the startup says is the first space-based research and development program into new battery materials.

The experiment will be among a selected number of Israeli research projects to be performed on the International Space Station, as part of Israel’s Rakia program. Jointly backed by the Israeli Ministry of Science and Technology and the Ramon Foundation, the Rakia (sky in Hebrew) program is part of Axiom Space Ax-1, the world’s first private mission to the ISS.

As part of the Rakia program, Eytan Stibbe will travel to the ISS on the SpaceX Dragon capsule next year, becoming only the second Israeli astronaut. On board, he will undertake 200 hours of scientific projects and educational outreach, including a series of live lessons for Israeli schoolchildren.

The Ramon Foundation and the Ministry of Science on Wednesday announced the 44 selected projects for the program, many of which still need NASA approval. The projects hail from a wide spectrum of scientific and technological disciplines – radiation, genomics, immunology, neural functioning, quantum communication, astrophysics, agri-tech, communications, optics, ophthalmology, medical devices, and disease research.

Doron Myerdorf, the co-founder and CEO of StoreDot (Courtesy)

“We have kind of exhausted avenues for new materials research on earth,” said StoreDot’s CEO Doron Myersdorf in an interview. “We are trying to see if we can accelerate a breakthrough in new materials in zero gravity conditions.”

This breakthrough is achieved primarily by replacing graphite in the cell’s anode with metalloid nanoparticles, such as silicon, to overcome major issues in safety, cycle life and cell swelling during the charging process.

Part of the challenge of creating innovative batteries is to know what is happening inside the chargers. To be able to isolate and identify chemical processes, battery cells need to undergo testing in extreme conditions: high and low heat, low oxygen levels, and other extreme scenarios to be able to “sift through various scenarios of battery degradation,” he said.

Experimenting on fast charging in space has not been done before, he said, and the process could help isolate defects and degradation mechanisms that don’t occur on Earth.

In a specially devised, self-contained experiment, cells of StoreDot’s silicon-dominant anode XFC battery will undergo hundreds of charge and discharge cycles, with the results collected by a computer contained within the enclosed unit. Once the experiment is returned to Earth, StoreDot’s team of scientists will undertake an extensive analysis of the data as well as examine the battery itself to note any physical or chemical changes that have taken place during the experiment.

In particular, StoreDot will use the experiment to gain new insights into the chemical reactions that cause silicon to expand during the fast-charging process. This will be achieved by using zero gravity conditions to identify irregularities in the silicon surface of the anode. 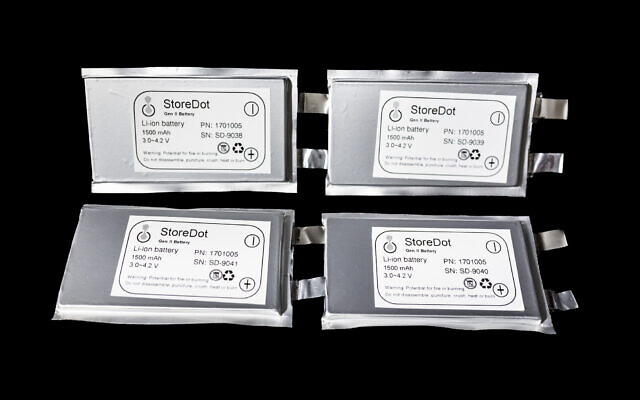 The findings from the research will be incorporated into the first engineering samples of StoreDot’s silicon-dominant anode XFC battery for electric vehicles, which will be available for testing by the end of 2022, the company said.

Mayersdorf said he doesn’t expect any major breakthroughs from this first experiment in space, but developing a methodology of testing out materials on Earth and in space and comparing the results is “pioneering” and will have implications for industries far beyond batteries, he said.

“As this is something that has never done before it’s difficult to know exactly what we will discover, but the methodology of analyzing reactions in space has huge potential and will enable us discover things that simply would not be possible on Earth,” said Myersdorf.

In 2019, the company, whose strategic investors include BP, Daimler, TDK and Samsung Ventures, used a small form factor of its XFC technology to demonstrate the world’s first full live charge of a two-wheeled electric vehicle in five minutes. Another milestone followed in January 2021 when StoreDot launched engineering samples of batteries.

Referring to StoreDot’s experiment, which will be done with the backing of the Israel Electric Corporation, the Ramon Foundation and Israel’s Ministry of Science said in a statement: “The invaluable conclusions deriving from the experiment could lead to rapid charging of the batteries found in most electrical and electronic devices, including watches, laptops, and electric vehicles, as well as energy storage facilities that are at the core of the electricity sector’s future.”

A spokeswoman for the Ramon Foundation confirmed StoreDot’s proposal has been selected by NASA. Funding for the projects to get onto the mission still needs to be raised, she said.