Serendipity played no small part in helping Uri Shulevitz survive the Holocaust as a child. Nearly 76 years later, Shulevitz — now an acclaimed author and illustrator of children’s books — is contemplating the role that fate played in preserving his life in his new memoir for kids, “Chance: Escape From the Holocaust.”

In a phone interview with The Times of Israel, Shulevitz said that the title — which was suggested by his wife, Paula Brown — “reflects very much what was going on, because, to put it a certain way, fate was playing Russian roulette with our lives.”

Shulevitz and his parents had to entrust their lives to fate after the German invasion of Poland on September 1, 1939, started World War II. Over the next eight years, they experienced starvation, separation and illness in a journey that took them from Poland to Belarus to Archangelsk to Turkestan, going ever further east into areas the Nazis never penetrated.

Sometimes, what seemed like bad news turned out to be beneficial. One such moment happened after the family had fled from Warsaw to Belarus. They faced a choice of either getting Russian passports or being sent back to Poland. The Soviet official issuing passports said that Uri must be Jewish because he had the same first name as Zionist poet Uri Zvi Greenberg, who was in disfavor with the USSR. This dissuaded Shulevitz’s parents from getting Russian citizenship. Yet instead of returning to Poland, they were transferred further east. Fellow refugees who became Russian citizens stayed in Belarus. Shulevitz said that when the Nazis invaded, they deported the new citizens back to Poland, ultimately to concentration camps.

“Things like that just go to show that one of the aspects of war is unpredictability,” Shulevitz said. “A lack of any kind of common sense, the vagaries of what happened. People ended up very confused about what was going to be next.”

The unpredictability continued even after the war, when Shulevitz and his parents finally returned to Poland. Finding a hostile reception by some, they went back on the move, finding a new home in Paris and then in the recently independent State of Israel.

Cover of ‘Chance: Escape From the Holocaust.’ (Courtesy Farrar, Straus and Giroux)

By that time, Shulevitz was a promising young artist. After he left Israel for the United States, he launched a celebrated career in children’s books. He has illustrated stories by great Jewish writers such as Sholem Aleichem and Isaac Bashevis Singer (whom he met). Shulevitz has won the Caldecott Medal for “The Fool of the World and the Flying Ship” in 1968, and the National Jewish Book Award for “The Travels of Benjamin of Tudela” in 2005.

“Chance” has received critical and public acclaim as well since its release last year, with 2.3 million copies on its backlist sales, and multiple accolades.

The New York Times named it among its top 20 children’s books of 2020, while similar recognition came from School Library Journal, The Horn Book, Booklist, Publishers Weekly and Kirkus Reviews.

Now in his 80s, Shulevitz had to plumb deep into his past to write the memoir.

“I like to say that unlike some people who don’t like to talk about the past, it’s too painful, I believe strongly that emotions are good,” Shulevitz said. “Some memories are very painful. As I was writing them, I started crying. I accepted this with open arms.”

The book includes rare family photographs from the era. Two are from his time in the USSR. The rest came from family members after the war.

Some memories are very painful. As I was writing them, I started crying. I accepted this with open arms

“We met, again, some survivors from our family,” Shulevitz explained. Although all of his relatives in Poland perished, he said, “some relatives in Israel, and also France, had copies of those pictures or gave us the originals.”

Shulevitz also incorporated artwork he had drawn as a child, between the ages of 10 and 13. They include early efforts on a graphic novel and a sci-fi story, both drawn during his Paris days, before the family moved to Israel.

“Art gave me a context to my life, a reason to live, because the passion for art, for drawing, was extremely important for me,” Shulevitz said. “It became entwined with my own being, my whole being, against all odds.” 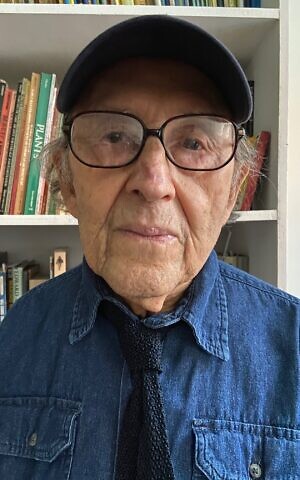 Uri Shulevitz, author of ‘Chance: Escape From the Holocaust.’ (Courtesy of Paula Brown)

The obstacles he faced in Russia included “the terrible hunger that lasted for years, the lack of medications — all had been sent to the [Soviet] army at the front lines. There was nothing left where we were. I got sick with some very terrible illnesses.

“I was able to survive,” he said. “I was driven by my passion for art. It gave me a reason to survive, a will to live. Otherwise, I can’t explain [surviving] in any other way.”

Shulevitz contributed new artwork to the book. Some of these illustrations address the blitz in Warsaw, which he calls “a very frightening experience.”

“I went into some kind of form of shock, which was natural, I think,” he said. “Watching through the window, seeing the destruction, what was going on. At the same time, it seemed unreal. Nothing was happening in a way you could understand.”

He illustrated the blitz through images of a German plane flying over panicked citizens, and of people carrying water from the Vistula River amid ruined buildings. He depicted life in Turkestan as well, including a Chechen refugee on the run, eating a piece of pita he had stolen.

As he worked on the manuscript, Shulevitz realized that certain individuals played important and unexpected roles in helping his family. There was the NKVD officer whose respect for Shulevitz’s father’s work in a theater led him to warn that the family risked being separated by the authorities.

“If it had been another officer, who did not care much about theater,” Shulevitz said, the possibilities might have been that “we would have been separated, possibly forever. I do not believe, in that case, my mother and me would have survived.” 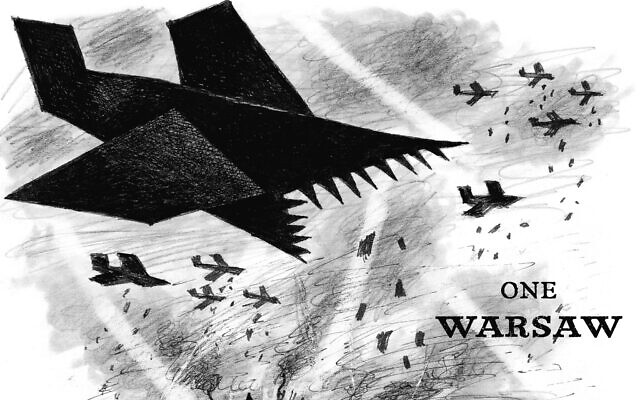 Image of planes bombing Warsaw from ‘Chance: Escape From the Holocaust.’ (Courtesy Farrar, Straus and Giroux)

He also mentioned the kindness of a refugee camp director toward his mother when she became desperately ill; and an official in Turkestan who turned out to be a fellow Jew. This official was looking for someone to decorate the tomb of his father, a Bukharan Jew, and Shulevitz’s artistically inclined father was able to help. This in turn led the official to help Shulevitz’s family.

Individual actions, however, could also impact the family in a negative way. This happened when they returned to Poland after WWII, in the form of a hostile colonel who lived in their apartment building in Krakow.

“To return to Poland after the war, and after all that happened to us in Russia, the difficulties we had in returning, the road back, how arduous and difficult it was,” Shulevitz said, “my parents were in danger of being killed by an irate Polish colonel. They didn’t want to remain there any longer.”

He noted that in Poland, “there were individuals who risked their lives to save Jews. There were also those others — unfortunately, like this colonel — who were not among them … We were born there. We expected the reception was going to be quite different. We were deeply disappointed, and just left.”

To return to Poland after the war, and after all that happened to us in Russia… We expected the reception was going to be quite different. We were deeply disappointed, and just left

From Vienna and a displaced persons camp in Germany, the family went to Paris, where Shulevitz earned early recognition as an artist, winning an interscholastic drawing competition at age 13. Two years later, having moved to Israel by then, he submitted two drawings to an exhibit organized by the director of the Art Institute of Tel Aviv. His first painting teacher, the Israeli artist Yehezkel Streichman, encouraged him to do so. Both drawings were accepted, making 15-year-old Shulevitz the youngest person in the show.

Asked if he has any advice for young artists today, Shulevtz said, “First, I think, they should be wary. They’re choosing a very difficult life. Their passion has to be so strong. [They must] be willing to accept that, and all the struggles that may come with it, if it is something they will accept, keep at it, put all their mind and soul into it, and learn as much as possible, do the best they possibly can.”

A decade later, Shulevitz went to the US. Going on to further fame there, his projects included “many books related in one way or another to Jewish themes or an actual Jewish story,” he said. 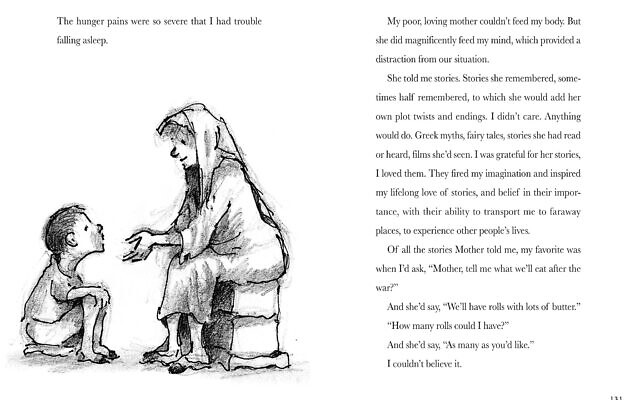 An illustration of Uri Shulevitz talking to his mother as a child from ‘Chance: Escape From the Holocaust.’ (Courtesy Farrar, Straus and Giroux)

They include illustrations of two books by Isaac Bashevis Singer — “The Fools of Chelm and Their History” and “The Golem” — as well as “The Travels of Benjamin of Tudela.”

“I was honored and lucky,” Shulevitz said. “I actually knew Isaac Bashevis Singer… I did a lot of research, actually, to be able to write ‘The Travels of Benjamin of Tudela.’ I was also lucky [in that] I knew Hebrew, so I could read [Tudela’s] book in Hebrew, which was extremely helpful.”

He has written previous autobiographical books or books featuring elements of his life — including “What Is a Wise Bird Like You Doing in a Silly Tale Like This,” which he said is a “retelling of a nonsense little rhyme my mother used to tell me in Yiddish that I loved.”

Now he has returned to autobiography, in a most poignant way.

What readers will take away from “Chance” is “up to them,” Shulevitz said. But he added a suggestion.

“I think what they could take away is what happens to people — in this case, my family and me — how we survived and how one can survive against all odds,” Shulevitz said.