“The split screen,” in its Israeli context, originally referred to an infamous, surreal 2002 television broadcast in which news coverage of a deadly terror attack in Jerusalem was aired directly alongside an ongoing Haifa-Kiryat Gat soccer match.

But on Monday the term applied to the still surreal, but far less macabre, media coverage of the opening of the evidentiary stage of Prime Minister Benjamin Netanyahu’s corruption trial, which was intercut with the broadcast of his political allies seeking to convince the president to give him first crack at forming a ruling coalition after last month’s inconclusive elections.

Monday’s hearing set the groundwork for the state’s so-called Case 4000, in which the premier is accused of granting regulatory favors to Shaul and Iris Elovitch, who controlled the Bezeq telecommunications firm, in exchange for positive media coverage in the Bezeq-owned news outlet, Walla — an arrangement which prosecutors have deemed an illegal quid pro quo.

The session began just after 9 a.m. with a roughly 20-minute opening statement by lead prosecutor Liat Ben-Ari, who laid out the state’s general case against Netanyahu. The prime minister, sitting a few feet away, generally watched her with a dull stare, arms crossed. At times, he whispered comments to his attorney; at others, he scribbled on a notepad.

When Ben-Ari was done, Netanyahu left the courtroom, having been given dispensation by the judges to do so.

The rest of the day, until the court adjourned around 3:30 p.m., was dedicated to the testimony of former Walla news CEO Ilan Yeshua, who detailed how he was tasked with playing up positive articles about the premier and his family and critical stories about rivals and taking down from the homepage negative stories about the Netanyahus.

Yeshua told the court that this was part of the arrangement between the Elovitches and the prime minister for his support on financially beneficial matters related to their telecommunications firm. (In addition to his role as prime minister, Netanyahu also served as communications minister from 2014 to 2017.)

Yeshua, a key witness for the prosecution, did not complete his testimony on Monday and was scheduled to continue on Tuesday morning.

Outside the East Jerusalem courthouse, pro- and anti-Netanyahu protesters held dueling demonstrations on the street, with bullhorns and speakers, blasting speeches, slogans and music, a cacophony that regularly threatened to drown out the audio feed of the trial coming through the closed-circuit television that was set up for journalists covering the trial.

Referring to the multiple sets of security bars on the windows, one reporter inside the courthouse quipped, “These were built to keep out hand grenades, not noise.” 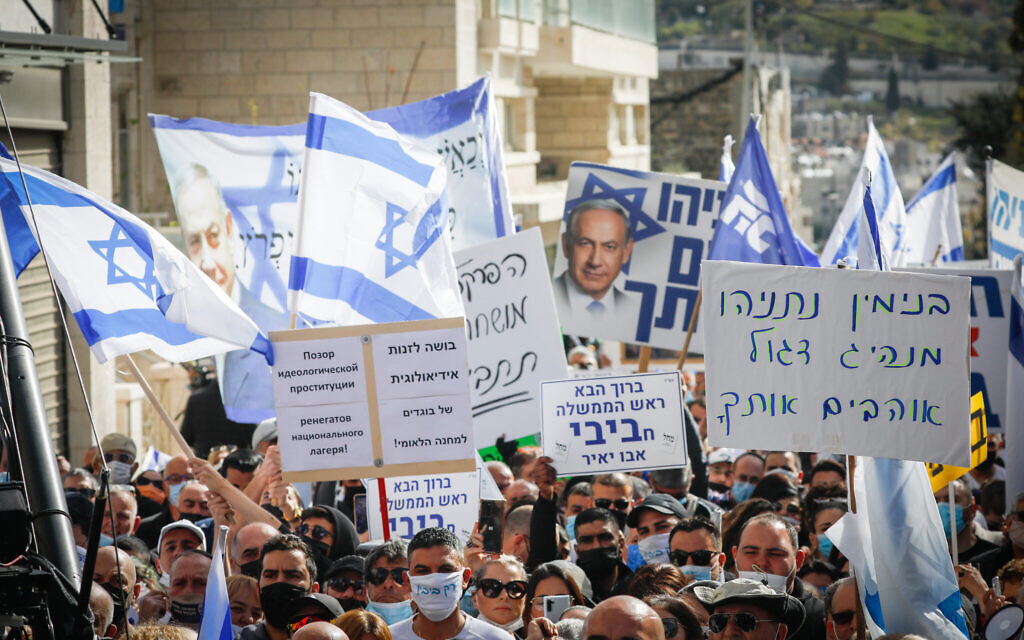 After lunch, most of the protesters moved across town to the President’s Residence, where President Reuven Rivlin was holding sessions with each political party to hear their recommendations for who should be tasked with building a government. Though Netanyahu garnered sufficient endorsements to probably give him the first try to form a coalition, he remains nine seats short of the 61 needed to actually form a majority government, and has no clear path to getting them. 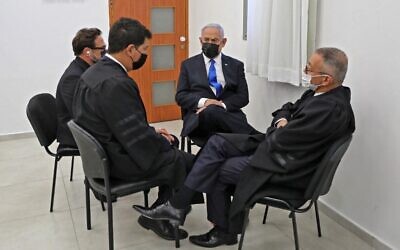 Prime Minister Benjamin Netanyahu sits with his lawyers at a hearing in his corruption trial at Jerusalem District Court, April 5, 2021. (POOL / AFP)

Despite the weighty significance of the trial, which involves not only the prime minister but also titans of Israeli industry, the proceedings are being held in a tiny court room, with barely enough room for the defendants, their legal teams, the prosecution and the judges. As it cannot be recorded or filmed, only a courtroom artist can visually capture the scene with hasty sketches from the trial.

Everyone in the court is required to wear a face mask, and they are seated at tables with clear plexiglass barriers separating each person from their neighbor. Throughout Monday, lead Judge Rebecca Friedman-Feldman regularly interrupted the proceedings to instruct those inside the courtroom to put on their face masks or pull them up over their noses.

In her opening remarks, Ben-Ari — who has faced considerable personal criticism from the prime minister directly and from his supporters — accused Netanyahu of committing a “severe case of governmental corruption” by offering to trade regulatory and legislative favors from media tycoons for positive media coverage and for accepting illicit gifts.

Stressing that “every person is equal before the law,” Ben-Ari claimed Netanyahu “made forbidden use of the great governmental power in his hands in order to, inter alia, receive forbidden favors from the owners of leading media outlets in Israel in order to advance his personal interests, principally his desire to again be elected.” 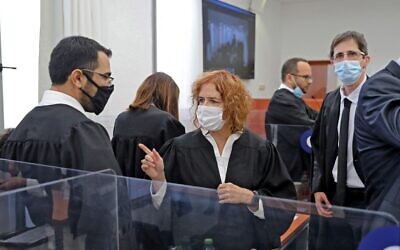 The premier did not make any remarks ahead of the start of the trial or immediately upon leaving, but waited until later in the day to deliver a diatribe against the judiciary, denying the charges against him and accusing the prosecution of being the one making “forbidden use of great governmental power” with its investigation, which he called a “witch hunt,” saying his prosecutors were trying to carry out a “coup” against him. 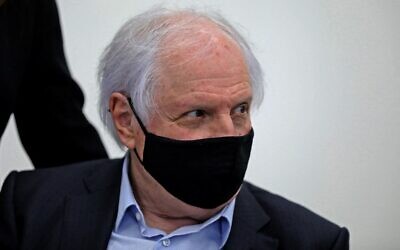 The Elovitches were each indicted for offering a bribe and on obstruction of justice charges for their alleged roles in Case 4000. Shaul Elovitch was also charged with the financial crimes of making use of illicit property and making a false report in order to mislead a reasonable investor.

The Elovitches were both present in the Jerusalem District Court on Monday, as was the publisher of the Yedioth Ahronoth newspaper, Arnon Mozes, who was indicted with offering a bribe and promising a bribe in Case 2000. Mozes was permitted to leave the court shortly after Netanyahu as the day’s testimony was not relevant to the charges against him.

Yeshua was the first and so far only witness to appear, though hundreds more are expected to testify in the coming months and potentially years. The trial is scheduled to continue from 9 a.m. to 3:30 p.m. every Monday, Tuesday and Wednesday for at least the next few weeks.

Yeshua’s testimony began with a relatively banal description of Walla’s inner workings, its size compared to its competition, and the names of the central figures in the organization and their place in the company’s hierarchy. The company was owned by the Elovitches’ Bezeq telecommunications firm, run by Yeshua and edited by Yinon Magal, who left the website in 2014 for a short political career with the right-wing Jewish Home party. 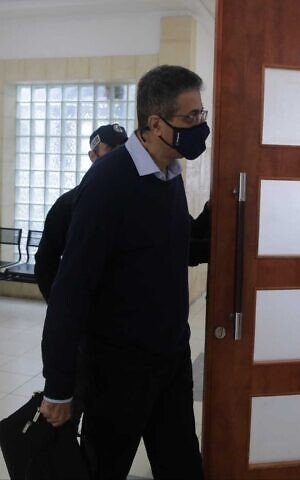 After a short while, however, Yeshua began detailing the ways in which the content of the site was dictated to him by both the Elovitches and by those close to the Netanyahu family, beginning in 2013, shortly before Netanyahu became communications minister.

“Positive” articles included both stories that were favorable toward the Netanyahus and those that were critical of their rivals and political opponents, chiefly those on the right wing of Israeli politics, such as Naftali Bennett, Bennett’s wife Gilat, and MKs Ayelet Shaked, Uri Ariel and Gilad Erdan.

When asked by the lead prosecutor in Case 4000, Yehudit Tirosh, why he was told to play up positive articles about the Netanyahus and take negatives ones off the homepage, Yeshua responded: “Because that’s what the prime minister wants. That was the explanation that was given.”

Yeshua said there were also cases of the Elovitches explicitly calling for articles critical of the premier to be taken down because of an imminent regulatory decision. “Elovitch would say, ‘take that down, tomorrow he needs to sign off on Yes,’” Yeshua said, referring to the satellite television provider Elovitch owned, whose merger with Bezeq allegedly benefitted the Eloviches to the tune of hundreds of millions of dollars. 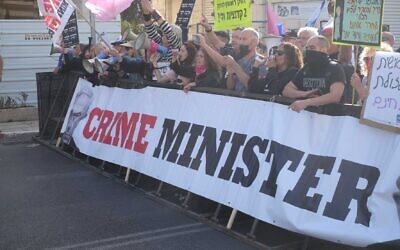 While Yeshua acknowledged that other politicians also request positive coverage from news outlets, he said that the Netanyahus operated on a different scale, asking in one week what other public officials would ask over the course of several years.

Yeshua said the Elovitches also used the Walla news site to settle their own grievances, notably against former finance minister Moshe Kahlon, who when communications minister had opened the cellphone market to competition, harming the couple’s revenues.

The former Walla CEO recalled the couple derisively referring to Kahlon, who was born to Libyan Jewish parents, as “the Arab” and “smiley,” and calling the Orthodox Naftali Bennett “the naughty religious boy.”

Though Yeshua never received orders directly from Benjamin or Sara Netanyahu — instead getting them from those close to them or officials in the Prime Minister’s Office — he told the court that it was clear that the directives were for and from them. 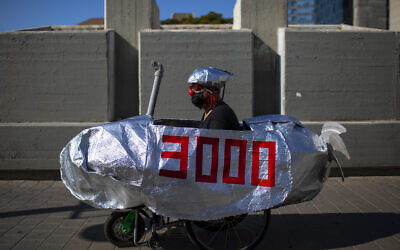 One such order was to avoid coverage of “the submarines,” Yeshua said, referring to the so-called Case 3000 regarding the irregular purchase of submarines from the German firm Thyssenkrupp. Netanyahu was neither indicted nor formally named as a suspect in that case, but several of his close allies have been charged for corruption over the matter for allegedly illegally pushing for Thyssenkrupp to receive the order.

Initially, Yeshua said these requests came to him first from the Elovitches, but after a short time he understood that he should also follow the orders from Netanyahu’s aides.

The former CEO said he would receive messages from Netanyahu’s media adviser Nir Hefetz, like, “Do an item about this,” referring to some topic or other. 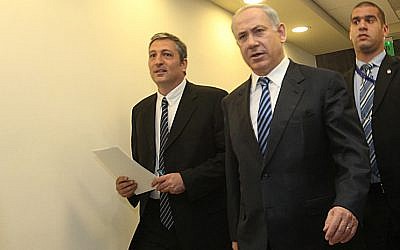 “I would know what to do,” said Yeshua, who added that he eventually started clearing the site of content critical of the Netanyahus preemptively too.

Asked by the prosecutor why the website was allegedly also beholden to the demands of Sara Netanyahu, Yeshua explained that Shaul and Iris Elovitch believed that in order to curry favor with the prime minister, it was necessary to keep his wife happy.

But this clearly skewed coverage did not go unnoticed by the editors at Walla, including then-editor in chief Magal, who called the situation “an abomination” at the time, according to Yeshua.

Yeshua said there were daily fights at the outlet about the coverage, but that “nearly all” of the orders issued on behalf of the Netanyahus were carried out. He noted one exception in which he was tasked with getting an article written alleging that the investigative journalist Avner Hofstein was suspected of sexual harassment — a false claim. Following pushback, the matter was dropped. At the time, Hofstein worked for Army Radio; he now works for The Times of Israel’s Hebrew-language sister-site Zman Israel.

The proposed hit piece against Hofstein had long been rumored, but had not been officially alleged to have been considered until Monday.

“Slowly the truth comes out. The dawn always comes after the night, no?” Hofstein wrote in a tweet after Yeshua’s testimony.

After her initial round of questioning, Tirosh attempted to bring in more tangible evidence, with a colored spreadsheet showing the alleged communications between the premier’s office, the Elovitches and Yeshua, but Netanyahu’s attorneys argued that some of those messages should be excluded as they were collected as part of a separate, unrelated investigation, not as part of Case 4000, while the prosecution claimed that they were fair game.

With time running out, the judges determined that they would hear these procedural arguments on Tuesday.