In the year 390 BCE, Gauls invaded northern Italy. They defeated the Roman army time after time, finally burning and sacking the city of Rome itself. Then, they marched toward Capitoline Hill, site of the temple to Jupiter and the epicenter of the Roman Empire.

Unable to take the hill in daylight, the Gauls waited until nighttime and stealthily climbed up the walls. Even the dogs didn’t notice the invaders — but the temple geese made so much noise with their honking and cackling that they woke the guards. The Gauls were pushed back, and, according to legend, Rome’s geese had saved the day.

Now, visitors to Jerusalem’s Bible Lands Museum can get an intriguing look at the way humans have viewed birds over the ages in “Early Birds: Soaring With the Ancients,” the museum’s latest exhibition. Launched late last month, the display will run through the end of April 2022.

Displayed on wing-shaped platforms are exhibits related to birds in the sky, on land, in the water, and even in the netherworld — the mythical land of the dead. Original Roman frescoes with bird themes are scattered on exterior walls, while beautiful mosaics from the Byzantine era depict four species of bird. A soundtrack playing soothing birdsong (along with the aforementioned honks and cackles) adds to the avian atmosphere.

In Greek mythology, Zeus — the god of sky and thunder, and father of all gods and humans — is often symbolized by an eagle, as seen on some of the coins displayed in the exhibits. One Roman gem minted in the third century CE depicts a dead Julius Caesar whose soul is being carried by an eagle to the heavens.

Our favorite of the Roman-era frescos on the walls depicts Zeus in eagle form carrying a young boy. According to legend, he fell in love with a lad named Ganymede, abducted him, and carried him to Mount Olympus to become cup-bearer to the gods — and Zeus’s lover. The fresco dates back to 60 CE, 10 years before the fall of the Second Temple in Jerusalem.

A 2,400-year-old bronze figurine discovered in Mongolia probably sat on the helmet of a warrior and, based on its wide wingspan, was modeled after the common swift. Although the figurine’s origin is well beyond the geographic locations mapped out in the Bible, it does relate to Israel’s local scene, since the swift is one of over 500 million migrating birds that pass back and forth through the Land of Israel every year.

For 3,000 years or so, the falcon-headed god Horus has acted as a symbol of Egypt. Still popular today, Horus appears on Egyptian airplanes and can be found pictured in Egyptian hotels. In fact, Amazon even sells Horus falcon furniture slipcovers. Falcon mummies were offered up to Horus in the temples when people hoped the god would answer their prayers, so it should come as no surprise that millions of falcon mummies fill special Egyptian gravesites.

Sometimes, mummies of hawks — small birds of prey similar to falcons — were used as substitutes, with one such mummy on exhibit at the Bible Lands Museum. Researchers x-rayed the mummified bird to determine whether it was a hawk or a falcon, and its long legs led them to conclude that it was a hawk. 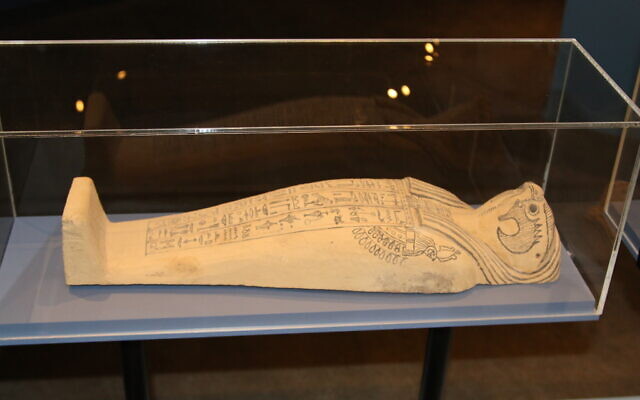 Ancient Egyptians were obsessed with death and burial, and some of their mummies were neither birds nor people. Another artifact on display is the lid of a sarcophagus that contained a corn mummy. In ancient Egypt, corn was wrapped in a manner that represented the god Osiris, king of the netherworld. The head of the sarcophagus lid is shaped like that of a falcon, and crowned falcons are depicted on its shoulders.

A gold-plated copper ostrich feather on display is a reference to Maat, an Egyptian goddess of truth and justice. In ancient times the deceased were judged by the weight of their hearts — if their hearts were lighter than a feather they ascended to the heavens, but woe to him or her whose heart was too heavy.

Water and waterfowl were basic to Egyptian stories of creation. One such tale speaks of a bird deity called Bennu, probably a gray heron, whose call broke the primeval silence of nonexistence and heralded the creation of the world. On view is a heart-shaped amulet from the 15th-13th centuries BCE depicting Bennu. 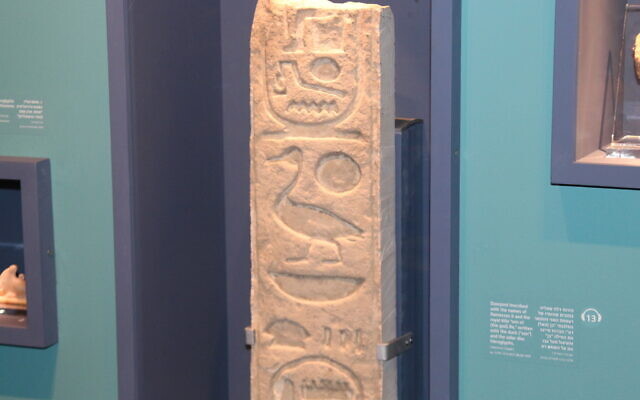 A doorpost from ancient Egypt uses a duck hieroglyph for the word ‘son.’ It’s on display at the Bible Lands Museum’s exhibit ‘Early Birds.’ (Shmuel Bar-Am)

A wall in the water section of the exhibit features an Egyptian doorpost of a type that the Bible calls a mezuzah. Over time, the word came to be used for the small box containing biblical passages that Jews around the world place on doorposts. This doorpost comes from Egypt and bears the royal names of Ramesses II, the great pharaoh of the 13th century BCE, with the title “son of the god Re.” The word for “son” is represented by a duck hieroglyph.

Twenty-six hundred years ago, a woman living in Italy wore the beautiful golden brooch also found on display. It depicts a family of ducks whose parent is being attacked, possibly by an otter. Other displays feature boat models from Sardinia decorated with ducks, while nearby are duck weights from Mesopotamia. These may be connected to the Mesopotamian goddess Nanshe, who was in charge of weights and measures, and was portrayed together with ducks on a clay plaque from the 21st century BCE. 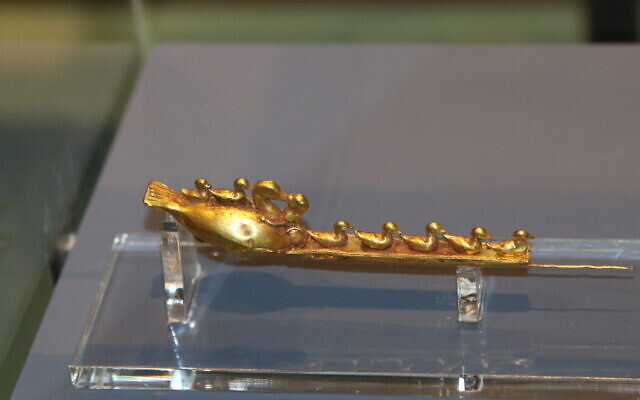 A 2,600-year-old Italian brooch featuring a family of ducks being attacked by a predator, on display at the Bible Lands Museum’s exhibit ‘Early Birds.’ (Shmuel Bar-Am)

Hens and roosters were domesticated in southeast Asia about 8,000 years ago and reached Mesopotamia 4,000 years later. At the time, the birds were not mainly used as food — instead, they were pitted against each other in cockfights. On display is a ninth-century BCE Phoenician stamp seal discovered in Lebanon with two roosters in fighting position.

The Talmud states that raising chickens and roosters in Jerusalem was prohibited during the Second Temple period. Nevertheless, there were definitely roosters to be found there, for in the Gospels, when Peter denies being one of Jesus’s disciples, “at that moment a rooster began to crow” (John 18: 27). Because of Peter’s later repentance, Christian tradition began connecting roosters with atonement. 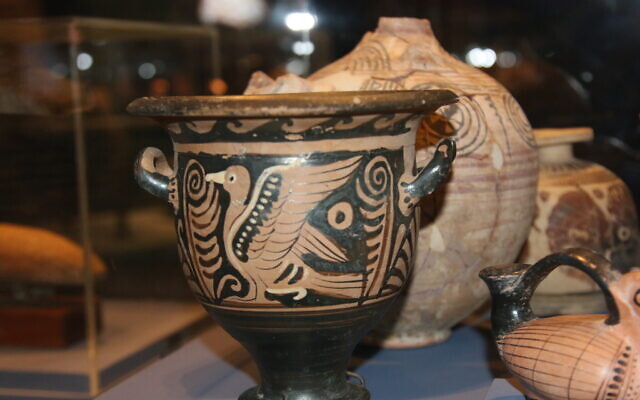 Other fowl displays feature a 1,500-year-old Italian perfume bottle whose lid is shaped like a rooster, a colorful Greek amphora from around the same period portraying two roosters, and a 16th-century BCE Iranian krater — a type of vessel originating in ancient Greece used for diluting wine with water — decorated with bird images.

Owls have their place in the exhibit as well. While today we may think of them as symbols of wisdom, the ancient Mesopotamians saw them as portents of death.

In contrast, the last section of the exhibit is devoted to the dove of peace. Although in the Mesopotamian flood myth it is the crow that provides proof the waters have receded, it is the dove that stars in the biblical version of the tale and, indeed, in most accounts of the deluge. The dove is linked so strongly to the notion of peace that Picasso adopted it as his theme for the lithograph he presented at the world’s first International Peace Conference in 1949. 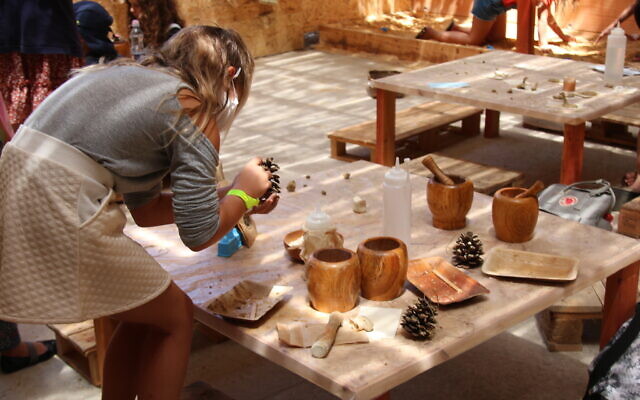 Visitors can tour the exhibit with audio headphones, take a guided group tour, or simply rely on the well-written explanations near each display. In the museum yard there is an activity center created in partnership with the Keren Kayemeth LeIsrael – Jewish National Fund. Toddlers and up can have a fantastic time in an enormous makeshift nest with a huge variety of games, riddles that take them in and out of the main exhibit, costumes for dress-up and bird shoes to make bird tracks in the sand. 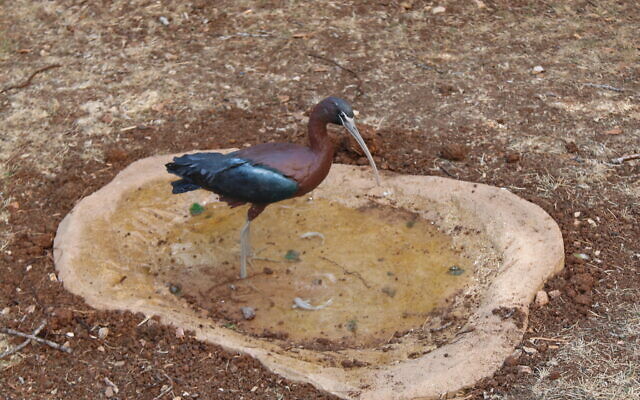 An ibis in the yard at the Bible Lands Museum’s ‘Early Birds’ exhibit. (Shmuel Bar-Am)

Lifelike bird models are scattered throughout on pillars, in trees, on the ground and behind walls that offer look-through windows. If one is lucky, while looking through the windows they may even spot the genuine article.

Our thanks to museum curator Dr. Yigal Bloch, who was our guide at the exhibit.

Information regarding prices, hours, and health regulations can be found on the museum website.

Aviva Bar-Am is the author of seven English-language guides to Israel.
Shmuel Bar-Am is a licensed tour guide who provides private, customized tours in Israel for individuals, families and small groups.