The 28th day of the Hebrew month of Iyar, which this year falls out on the evening of May 9 and the day of May 10, is the anniversary of the day that Israeli paratroopers captured Jerusalem’s Old City in the Six Day War.

Almost immediately following the Old City’s liberation, the soldiers who had participated in the battle piled some rocks together along Jericho Road outside the Lions’ Gate and planted a flag in the ground.

It was their way of honoring the memory of their fallen comrades, killed on that very same road, when soldiers made a fatal navigational mistake. Israeli troops had conquered the Jordanian outpost at the Rockefeller Museum, but two large obstacles remained: the Old City, and the well-fortified Augusta Victoria complex on the Mount of Olives, which offered a clear view of the Temple Mount down below.

Soldiers heading for the Mount of Olives missed the turn onto the ascent and instead descended along Jericho Road. Unfortunately, from their position on the road, the Israeli forces couldn’t see the Jordanian troops standing at the ready atop the Old City walls. Thus, the soldiers were hit hard when they reached the curve in the road which serves as a bridge above the Kidron Valley. A savage battle raged on the bridge, and other Israeli troops were called in to extract their comrades.

Years later, the impromptu monument, an extremely emotional sight, was moved from the location of the battle to its permanent home across from the ascent to Lions’ Gate. Replacing the rocks is a sculpted eagle with one wing reaching to the sky. A second shattered wing tilts sadly towards the earth.

Jericho Road in Jerusalem, where Israeli soldiers were killed in battle after making a navigational error. (Shmuel Bar-Am)

Everyone who has ever driven around the walls of the Old City has seen either the original monument or the newer one. But there are numerous monuments to soldiers killed in the Six Day War that are less well-known. Here are but a few: 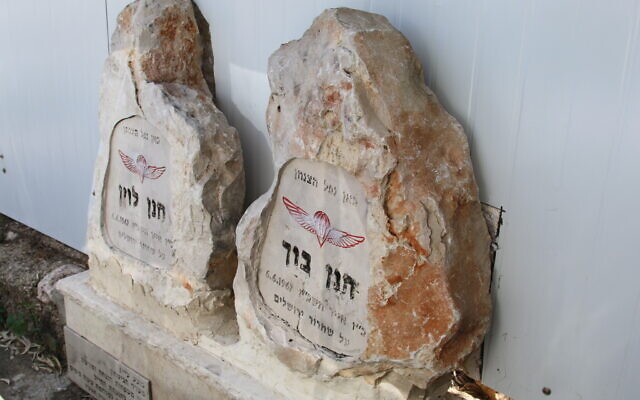 The memorials for corporals Hanan Boch and Hanan Levine at Gmul Street in Jerusalem. (Shmuel Bar-Am)

Two memorial rocks sitting on the ground along tiny Gmul Street — named for the Hebrew word which can mean retribution or reward — lean against a fence directly across from what had been Israel’s border with Jordan from 1948 until 1967. The street, like others in the Arzei Habira neighborhood, had suffered constantly from enemy shells. Plaques on the rocks bear the names of two young men: Cpl. Hanan Boch and Cpl. Hanan Levine.

Born in Eastern Europe in 1944, Boch immigrated to Israel at the age of 14 and settled in Kibbutz Ein Shemer. He served as a paratrooper in the army, returned to the kibbutz, and had just begun long-term plans with one of the settlement’s young women when, at the age of 23, he was called back into the reserves prior to the war.

Levine, also a paratrooper, was born in Tel Aviv. At 21, he had completed his army service not long before he was returned to his unit in preparation for the coming war. Both young men were killed on its second day, June 6, 1967, very near Gmul Street during fierce battles for Jerusalem. 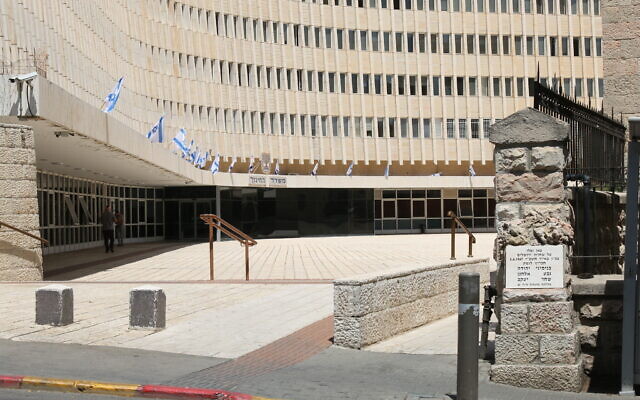 One plaque, situated along Haneviim Street, a main road, should be clearly visible. But it is dwarfed by the massive Education Ministry building and Italian Hospital behind it. Inscribed on the plaque are the names of three privates from wildly diverse backgrounds who served in the 62nd Battalion’s Mortar Platoon.

Jerusalem-born Elhanan (Hanan) Geva, 32, fell on the first day of the Six Day War; Iranian-born Yehuda (Dudu) Binyamini, 23, on the second; Hungarian-born Ya’akov-Mordecai (Yankele) Shahar, 27, on the third. All three were killed by massive Jordanian fire near the memorial that bears their names.

The community center and nearby monument in Abu Tor 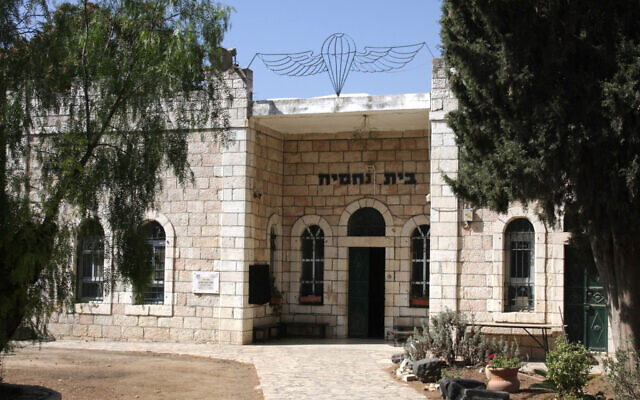 The beautiful community center in Jerusalem’s mixed Jewish and Arab neighborhood of Abu Tor, and a monument nearby, are dedicated to Capt. Nehemiah Cohen, one of the country’s most decorated officers. Born in Jerusalem in 1943 to parents who immigrated from Turkey after World War I, Cohen spent his regular army service in an elite commando unit. 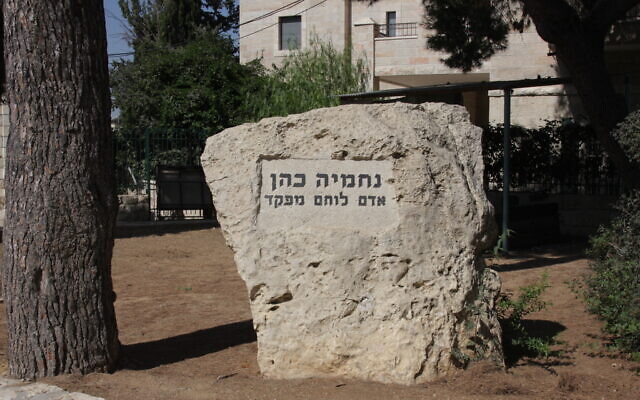 Over the course of his service, Cohen received five prestigious medals for actions whose circumstances have remained secret. And in 1973 he was honored with a posthumous medal for an action carried out with his brother, pilot and former Knesset member Eliezer Cohen, eight years earlier in Egypt.

In February of 1967, Cohen was appointed second in command of a paratroop division. During the Six Day War, after their commanding offer was killed in the Gaza region, Cohen led the men into battle. He was in the vehicle that spearheaded the advance, and that continued forward despite heavy fire. He fell on June 5, 1967. 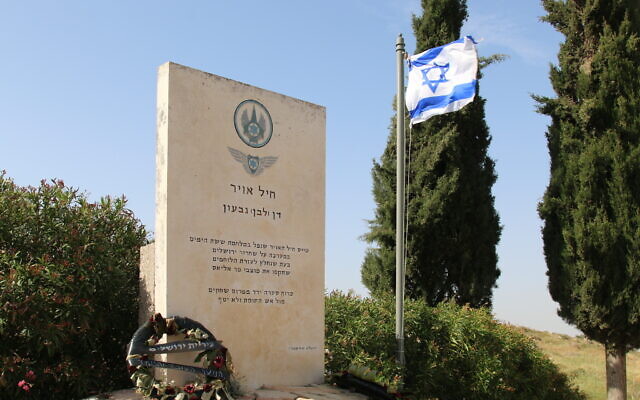 The monument to Lt. Dan Givon across from the Mar Elias Monastery in Jerusalem. (Shmuel Bar-Am)

Across from the Mar Elias Monastery on Hebron Road, the road leading to Bethlehem, stands a monument to the memory of Lt. Dan Givon. A multi-talented young man and a natural leader, he volunteered to serve in the Israeli Air Force. On the second day of the war, only days after he received his wings, he flew above the monastery in an attempt to take out Jordanian artillery. His plane took a direct hit and crashed on the height we call Aircraft Hill. He was 21 years old.

Valley of the Cross 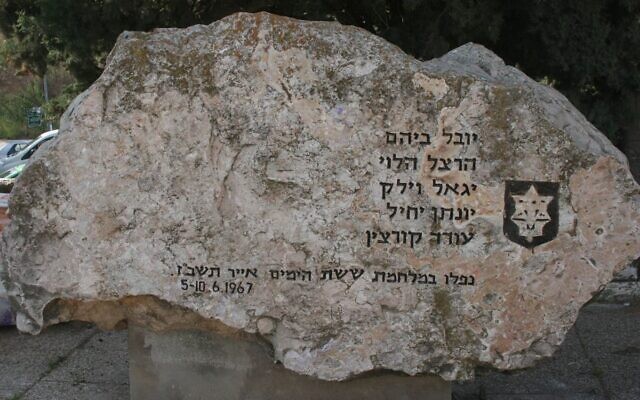 The memorial in Jerusalem’s Valley of the Cross includes the names of lieutenants Yuval Bihem and Yigal Vilk. (Shmuel Bar-Am)

Established in 1919, the Hebrew Scout movement is the largest youth movement in Israel and was the first co-ed scouting movement in the world. Its headquarters are located in Jerusalem’s Valley of the Cross, so named for its location next to the 1,000-year-old Georgian Monastery of the Cross.

Many of the youngsters who attended Jerusalem’s prestigious Rehavia High School also belonged to the Masada troop. They joined as youngsters and grew up to become leaders, among them Israeli President Reuven Rivlin. A monument in the memory of several troop members killed in the Six Day War stands next to the pedestrian walkway within the valley.

One of them was Sgt. Yuval Bihem, who spent several of his childhood years with his family in the United States. As soon as he returned home to Jerusalem he joined the Scout’s Masada troop. After completing his army service in the paratrooper corps and getting a bachelor’s degree in economics and statistics at the Hebrew University, Bihem began studying towards a master’s degree. At the same time he worked in the Prime Minister’s Office as an economic adviser.

Possessed of an extraordinary sense of humor and immense joie de vivre, he was felled by a sniper’s bullet during a battle for the Old City on the second day of the war. He was 27 years old. 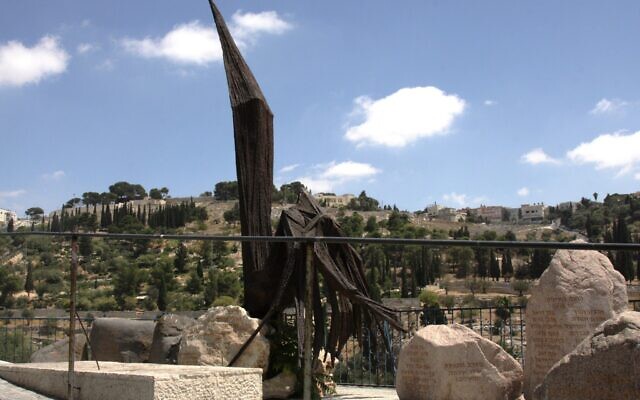 The eagle monument to fallen soldiers of the Six Day War near the Lions’ Gate just outside Jerusalem’s Old City. (Shmuel Bar-Am)

Lt. Yigal Vilk was born in Jerusalem in 1947, attended the Rehavia Gymnasia and was active in the Masada troop, where he became its battalion commander. It was clear to everyone that Vilk was born to be a leader, and when he enlisted in the army and volunteered for the Paratroopers unit, he was sent to the officers’ course.

Known for the smile that rarely left his lips, Vilk didn’t stand on ceremony with his men, who — like the youngsters in the Scouts troops that he led — revered their commander.

The war broke out while Vilk was in the middle of his regular army service. On the first day of the war, he and his company were ordered to attack a well-defended hilly outpost at the edge of Gaza. With no thought for his own safety, Vilk ran ahead, saving many lives but losing his own in the assault. 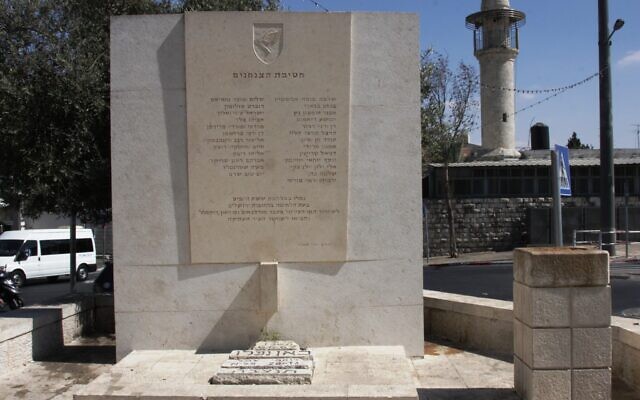 The monument to 25 fallen soldiers in the Six Day War located near the old American Consulate in East Jerusalem. (Shmuel Bar-Am)

Hugging the guard booth for the now-defunct American Consulate on Nablus Road in East Jerusalem, a plaza holds a spontaneous monument to 25 paratroopers of the 28th Battalion who were killed in action nearby. Although it stands close to historic remains of Jerusalem’s Third Wall – dating back just over 2,000 years – its location makes it one of the least visited, and least known, commemorative monuments in the city.

A second memorial wall stands above the original memorial. Who would have thought, in those heady moments when the first monument was erected, that there would be a need for a newer wall inscribed with the names of soldiers from the battalion who have fallen in Israel’s many wars since 1967?

Aviva Bar-Am is the author of seven English-language guides to Israel. Shmuel Bar-Am is a licensed, tour guide who provides private, customized tours in Israel for individuals, families and small groups.