JTA — Long before COVID-19 arrived in Israel, devastating Israel’s Hasidic communities, the annual Lag B’Omer gathering at Mount Meron was a moment of release for Israel’s Orthodox Jews, a festive night marking the end of a religious period of mourning.

And this year, when that release was especially needed after a year of loss, it became yet another tragedy.

Thousands of Haredi Jews died in the pandemic. And on Thursday night, at least 45 more ultra-Orthodox Jews were killed in a stampede at Mount Meron, with dozens more injured.

“The joy of our heart has ceased, our dancing has turned into mourning,” read the front page of Yated Ne’eman, a Haredi newspaper, on Friday morning.

A man weeps at the funeral of Rabbi Eliezer Goldberg, who died during Lag B’Omer celebrations at Mt. Meron in northern Israel, in Jerusalem on Friday, April 30, 2021. (AP Photo/Ariel Schalit)

The headline is a verse from Lamentations, the biblical book read on Tisha b’Av, the saddest day on the Jewish religious calendar.

Across the front of Haredi news sites was an incongruous phrase: “The tragedy of Meron.”

The night of music, dancing and bonfires on Mount Meron celebrate Lag B’Omer, a festive day that marks the end of a traditional mourning period in which, according to Jewish tradition, 24,000 Torah students died in a long-ago plague. For about a month each year, Jews around the world commemorate the plague by abstaining from life’s pleasures — music, dancing, weddings, even getting a haircut. 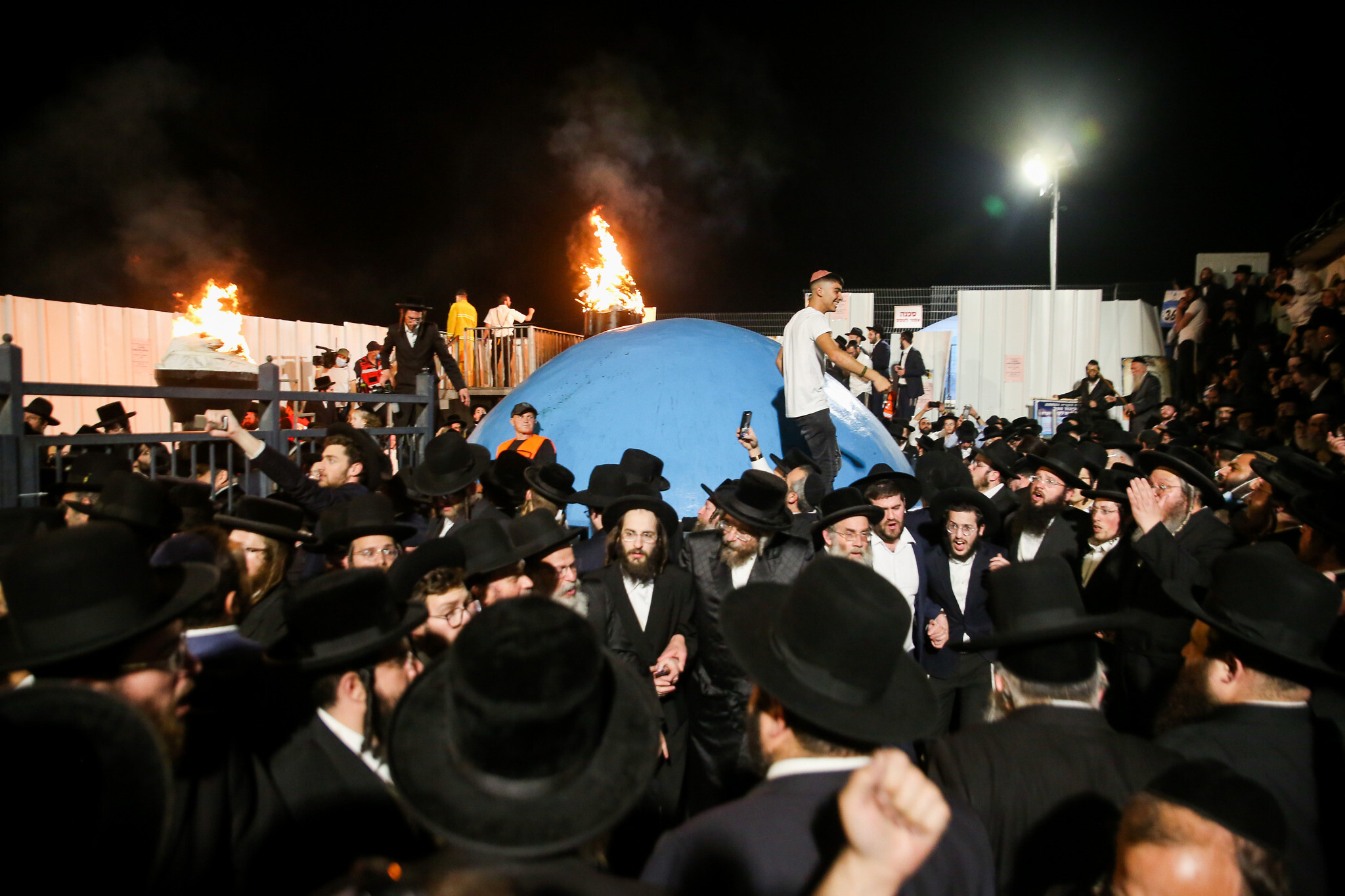 Those restrictions lift on Lag B’Omer, the joyous day on which the ancient plague ended.

This year, that seemed especially resonant. A modern-day plague, one that hit the ultra-Orthodox community particularly hard, is on the verge of disappearing from Israel — and right in time for Lag b’Omer. So while the some 100,000 revelers who crowded Mount Meron were celebrating an age-old religious rite, it was also a chance to sing and dance after a year of mourning. 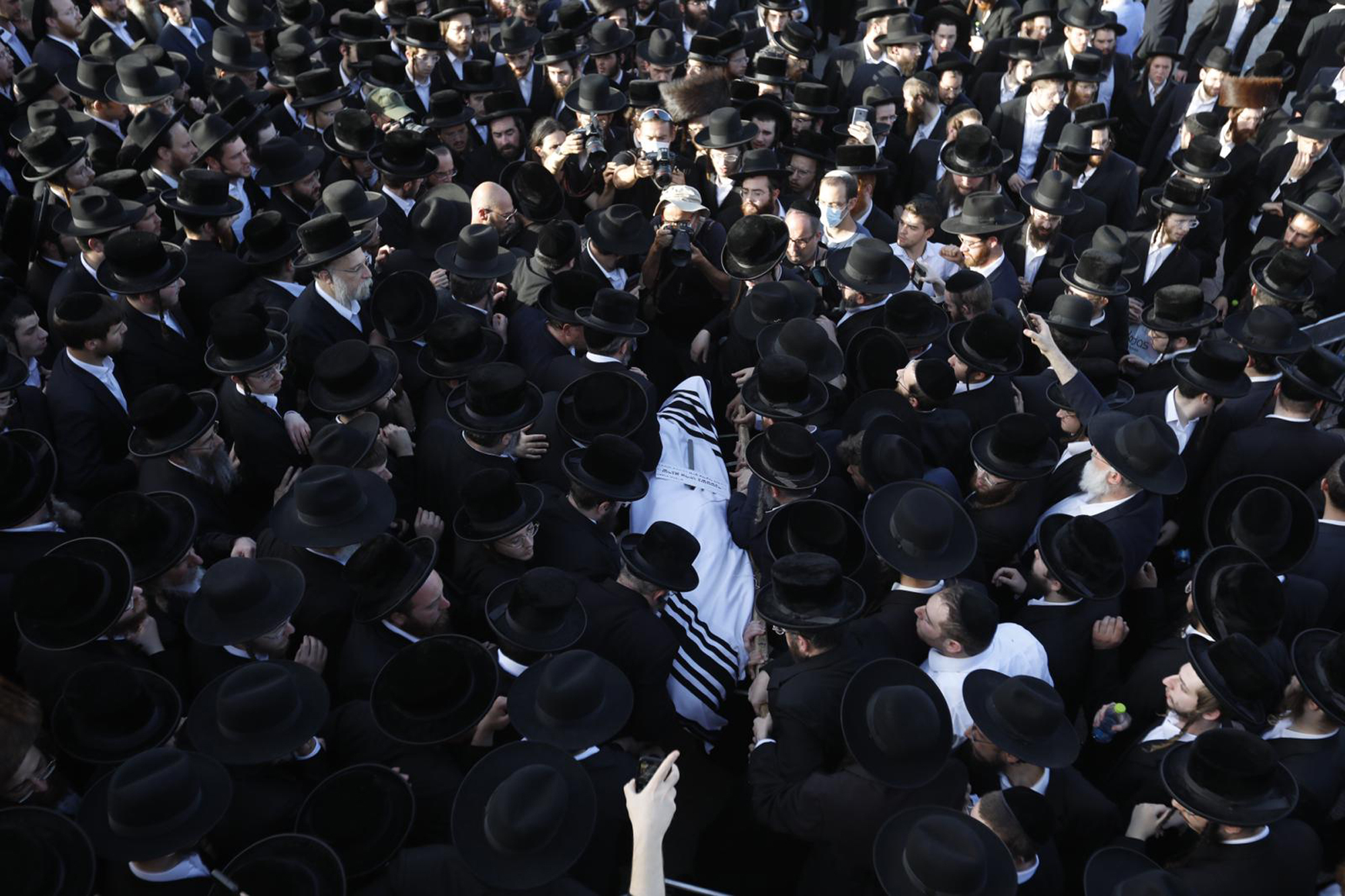 Mourners carry the body of Shraga Gestetner, a Canadian singer who died during Lag B’Omer celebrations at Mt. Meron in northern Israel, at his funeral in Jerusalem on Friday, April 30, 2021. (AP Photo/Ariel Schalit)

Instead, the Haredi world, and Israelis as a whole, have been thrust back into confronting mass death. The pictures on the front page of Yated recalled those that have circulated around social media for a year: The flashing lights of ambulances, corpses laying in a line covered in tarp head to toe. Images of Israelis lining up at blood banks across the country have spread online. Prime Minister Benjamin Netanyahu has declared a national day of mourning.

“To be sure, we are no strangers to tragedy and death,” wrote Rabbi Natan Slifkin, director of the Biblical Museum of Natural History in Beit Shemesh, a central Israeli city with a large Haredi population. “But in general such things are due to an outside cause — terrorism, persecution, famine, and so on. These deaths occurred simply in the context of a religious celebration. It’s just heart-wrenching.” 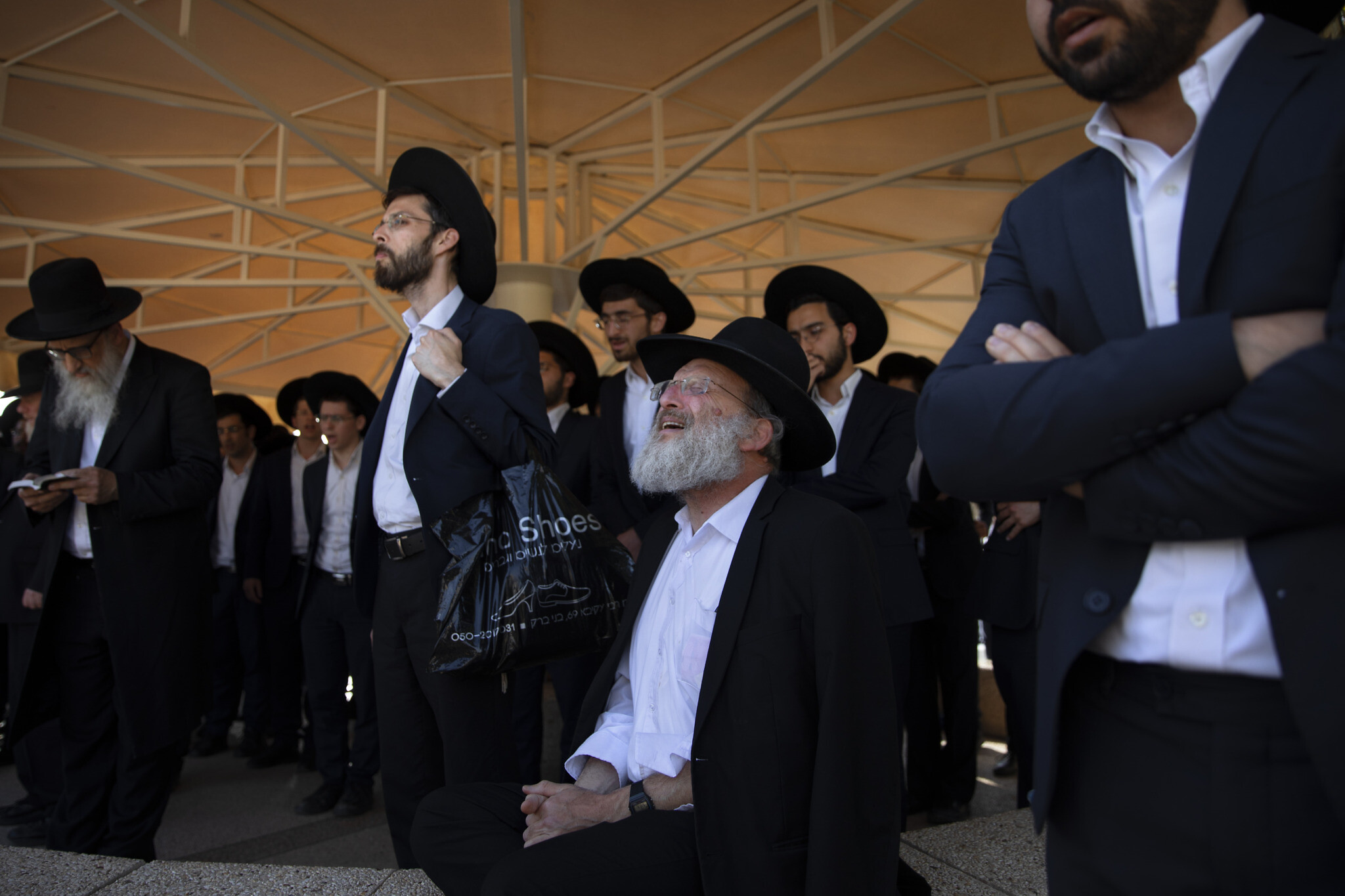 Ultra-Orthodox Jews mourn during the funeral of Moshe Ben Shalom at a cemetery in Petah Tikva, Israel, Friday, April 30, 2021. Ben Shalom and 44 others died during a stampede at Lag B’Omer celebrations, a religious festival attended by tens of thousands of ultra-Orthodox Jews in Mt. Meron, northern Israel early Friday. It was one of the country’s deadliest civilian disasters (AP Photo/Oded Balilty)

The dead are still being identified. For the Haredi families of the victims, who strive to bury their dead as quickly as possible according to Jewish law, the tragedy has been heightened with the knowledge that with Shabbat approaching, many funerals will need to wait at least a day. 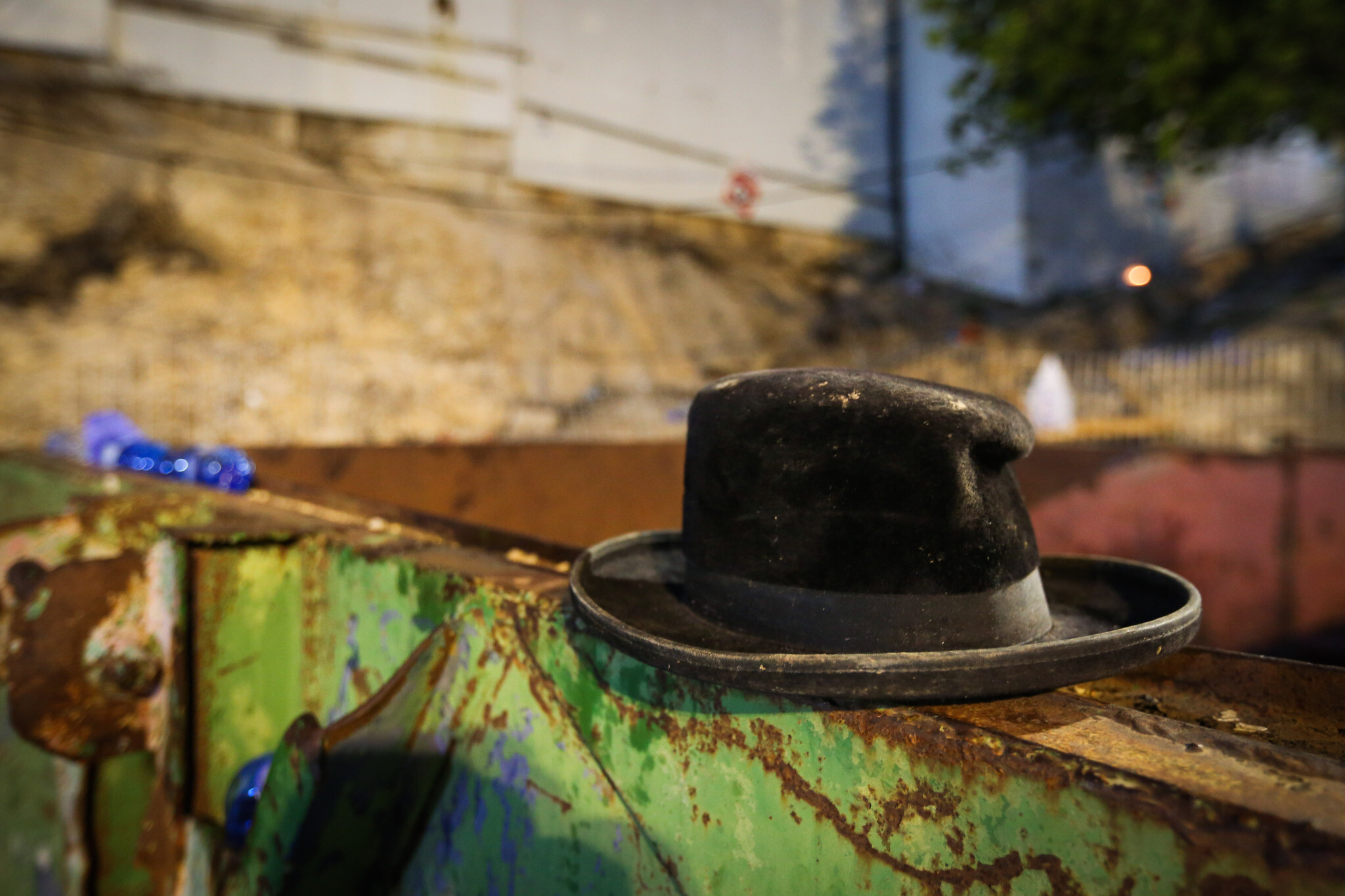 A hat at the scene of a deadly stampede during the Jewish holiday of Lag B’Omer on Mt. Meron, in northern Israel on April 30, 2021 (David Cohen/Flash90)

The loss has stretched across the globe, even in a year when fewer American Jews are traveling to Israel. At least five men from the New York area are dead or missing, according to reports: Rabbi Eliezer Tzvi Joseph of Kiryas Joel; Yosef Amram Tauber and a popular singer, Shraga Gestetner, both from Monsey;  Menachem Knoblowitz from the Brooklyn neighborhood of Borough Park and Daniel Morris, 19, of New Jersey.

In Kiryas Joel, the grand rabbi of the Satmar Hasidic movement, Aron Teitelbaum, delivered a eulogy for the victims at what was supposed to be his community’s celebratory bonfire.

For Israel, which has a painful expertise in dealing with death from war and terror, Thursday night earned a dark distinction: the deadliest civil disaster in the country’s history. Mount Meron is worse even than the Carmel Forest fire of 2010, which also killed more than 40 people while burning a large swath of a natural treasure. 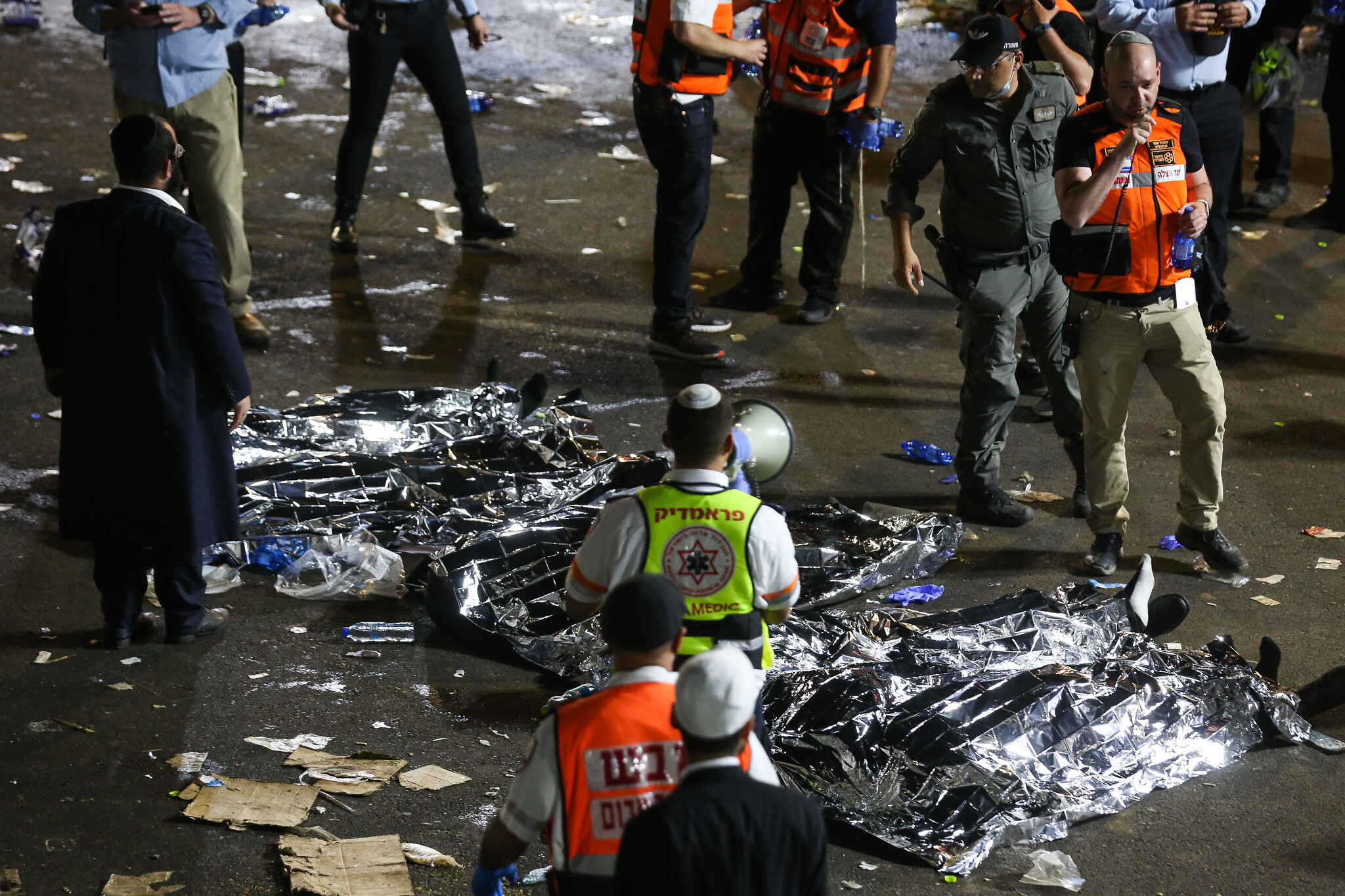 “[Paramedics] were exposed to very, very difficult sights, sights that we haven’t seen here in Israel since the worst days of terrorist waves back in the beginning of the 2000s,” said Dov Maisel, the director of operations for United Hatzalah, an EMT service, in a video from the scene. “I have no words. I honestly have no words.”