After leaving politics six months ago, former finance minister Moshe Kahlon is reportedly set to head a new investment fund founded with members of Abu Dhabi’s royal family in the wake of the normalization deal between Israel and the United Arab Emirates.

Kahlon, along with a senior royal, will lead investment for a number of “institutional bodies in Israel,” as well as the United Arab Emirates’ largest pension fund, Channel 12 news reported Sunday evening.

In recent months, Kahlon has forged close ties with the royal family in charge of the UAE’s second city, and recently traveled to Abu Dhabi for a lengthy secret visit, the report said.

It did not name Kahlon’s royal partner, but said he is considered one of the senior members of the royal family and one of the richest in the UAE, and that he has served as both justice minister and governor of the Emirati Central Bank.

The normalization of ties between Israel and the UAE in September caused a flurry of activity on both sides, with businesses, investors, and startups working to pave the way to strong and open ties between the nations.

Bank Hapoalim delegation of Israeli businesspeople, led by Dov Kokler, rings the bell to begin the day’s trading at the NASDAQ Dubai exchange in Sept. 2020. The delegation was welcomed by the exchange’s president, Hamed Ali, and the president and the CEO of the Dubai stock exchange, Hassan Abdul Rahaman Alserka (Courtesy)

Bank Leumi Le-Israel and Hapoalim, two of Israel’s largest banks, have already led business delegations to the UAE. Hapoalim said in September that it had signed an agreement with the biggest bank in Dubai, National Bank of Dubai. Leumi, also in September, signed cooperation memorandums of understanding with First Abu Dhabi Bank (FAB) and the Emirates NBD of Dubai.

Israel’s Economy Ministry has estimated that the normalization of ties between Israel and the United Arab Emirates could be worth hundreds of millions of dollars a year to Israel in trade and investments. According to figures compiled by the ministry, based on various scenarios, exports to the UAE, which are currently at around $300,000 a year, could jump to an annual $300 million to $500 million.

Kahlon’s fund is expected to announce a number of large-scale UAE investments in Israel in the coming weeks in the fields of innovation and technology, Channel 12 reported.

Kahlon announced in January that he would not be running as a candidate for the Likud party in the March election, effectively lowering the curtain on the nearly 15-year political career of the socioeconomic-minded, right-wing lawmaker. However, Kahlon stayed on as finance minister until his successor, Likud’s Israel Katz, was named in May. 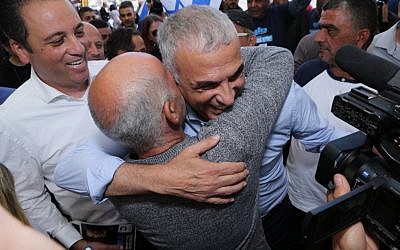 Kahlon began his Knesset career in 2003 as a lawmaker for Likud, passing popular reforms as communications minister before leaving the party and taking a break from politics in 2013 amid rumors of tensions with Netanyahu.

He founded Kulanu in 2015, becoming the most senior partner in the government with 10 seats. In September, he ran on a joint ticket with Netanyahu’s Likud after his party lost more than half of its support in the April vote, winning just four Knesset seats.