Phone numbers used by French President Emmanuel Macron and top members of his government are among the potential targets for the Pegasus spyware supplied to several governments worldwide, the NGO that leaked the list of numbers said Tuesday.

“We found these numbers, but we obviously couldn’t do a technical analysis of Emmanuel Macron’s phone” to determine if it had been infected with the malware, the head of Forbidden Stories, Laurent Richard, told LCI television.

“But it shows in any case there was an interest in doing it,” he said.

“If this fact is established, it’s obviously very serious,” a spokesman for Macron’s office said.

Forbidden Stories, a Paris-based media nonprofit, and Amnesty International initially had access to the leaked numbers, which they then shared with media organizations including The Washington Post, The Guardian and Le Monde.

Macron’s phone number was among some 50,000 believed to have been identified as people of interest since 2016 by clients of the Israeli firm NSO Group, developer of the Pegasus cyber-surveillance technology, the reports said.

In this file photo taken on August 28, 2016, a woman walks outside the building housing the Israeli NSO group, in Herzliya. (Jack Guez/AFP)

Meanwhile, French radio reported on Tuesday that Moroccan King Mohammed VI’s phone is on a list of numbers of people identified as potential Pegasus spyware targets by Morocco’s intelligence services.

Radio France made the claim two days after it and several other news outlets, including The Washington Post and The Guardian, reported that the Israeli software had been used by governments to spy on activists, journalists, lawyers and politicians around the world.

On Tuesday, Radio France claimed the country’s monarch was on the list as well as “a large number” of Moroccan royals.

The list was said to include the king’s wife Lalla Salma Bennani; his cousin Prince Moulay Hicham Alaoui, nicknamed the “red prince” for his progressive views; a former son-in-law of the late King Hassan II; entrepreneur Fouad Filali; and Hassan II’s former bodyguard, Mohamed Mediouri, who is the current king’s stepfather.

“But what is most surprising, when you look closely at this list, is that the sovereign himself is among those whose numbers were selected as potential Pegasus targets,” the report said. 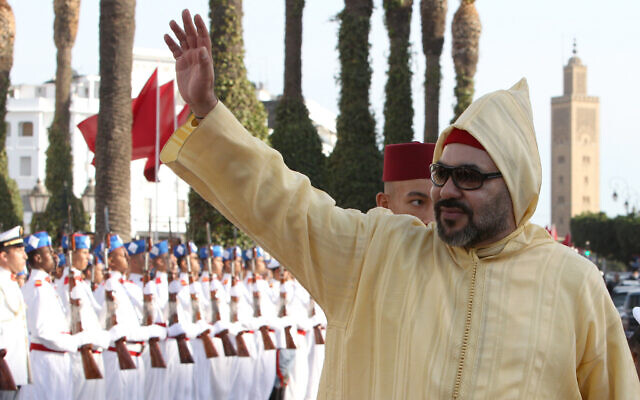 Moroccan King Mohammed VI waves to a crowd as he arrives for the opening session of the Moroccan Parliament in Rabat, Morocco, on October 12, 2018. (AP Photo/Abdeljalil Bounhar)

Radio France said it and its partners in the Forbidden Stories media consortium had established “that one of the telephone numbers that figures on the listing of the Moroccan intelligence services is indeed that of Mohammed VI.”

Radio France added that “his entire entourage suffered the same fate”, including the king’s chamberlain, Sidi Mohammed Alaoui, his personal secretary and three members of the latter’s family.

The list is also said to include the number of the head of Morocco’s royal gendarmerie, as well as the king’s former top bodyguard, Hassan Charrat.

It was not possible to immediately verify the claims.

Pegasus is a highly invasive tool that can switch on a target’s phone camera and microphone, as well as access data on the device, effectively turning a phone into a pocket spy. In some cases, it can be installed without the need to trick a user into initiating a download.

NSO Group has denied selling the software to authoritarian governments for the purposes of spying on dissenters, labelling the allegations “false.”