Authorities on Monday charged three more people over a brutal mob beating of an Arab man in Bat Yam last month, bringing the number of people accused in the ethnically charged attack to six.

Saeed Mousa was seriously injured in the May 12 attack, which was caught on live television and came amid escalating ethnic tensions between Jews and Arabs inside Israeli cities alongside an armed conflict with Gaza terror groups.

Only one of the three indicted Monday, 35-year-old David Bitayer, was hit with a terror-related charge, for aggravated assault.

Shai Simhon, 40, was charged with racially motivated theft and aggravated intentional assault. Yaakov Cohen, 31, was indicted on an intentional impairment of a vehicle charge.

Mousa was on his way to the beach in Bat Yam when he was set upon by a group that had gathered to attack Arabs and Arab-owned businesses in the Tel Aviv-area city, according to a previous charge sheet.

According to prosecutors, Mousa attempted to reverse away from the mob, but hit a car behind him. He then accelerated forward, with people jumping out of the way, before crashing into another car.

He was then dragged out of the car by the mob, with some now claiming he had attempted to run over pedestrians, and beaten badly.

Mousa was taken to Ichilov Hospital in serious condition. His condition has improved since.

Netanel Binyamin, 25, has been charged with attempted murder for the attack. He, Lahav Ohanina, 18, and a 16-year-old minor were indicted last month on terror charges stemming from the incident.

A man beats a man lying prone on the ground in Bat Yam, amid interethnic violence across Israel, May 12, 2021. (Kan TV Screenshot)

All six suspects have been charged in Tel Aviv District Court.

Prosecutors say Bitayer was filmed kicking Mousa, chasing him while yelling “Arab, Arab,” and breaking windows of an Arab-owned restaurant. His lawyer claimed that his participation in the attack was too minor to merit an attempted murder charge, Haaretz reported.

The paper also reported that Simhon was filmed kicking Mousa repeatedly and that Cohen was caught on tape trying to attack Mousa as he was being carried off on a stretcher.

Both claimed they only arrived at the scene as the attack was happening and mistook Mousa for a terrorist, according to the report.

Both had deleted parts of their messaging history before handing over their phones to police, but still avoided obstruction of justice charges, Haaretz reported.

Prosecutors accused Binyamin, Ohanina and the minor of taking an active role in a WhatsApp group that called for people to come to the Bat Yam promenade with the specific intent of harming Arab Israelis.

Following the incident, which was filmed and broadcast on live television, Ohanina told the Kan public broadcaster: “We went out on the street today to fight  with Arabs so we can show them that they cannot send missiles here. We are no longer children. We will fuck them. We will beat them. If necessary, we will kill them and if necessary murder them.”

Hundreds of indictments have been filed against Jews and Arabs over days of rioting in which mobs on each side attacked members of the opposite ethnicity, in a rash of violence not seen in decades that rocked the state. The tensions were partially fueled by the war with Gaza-based terrorists and violent pro-Palestinian protests in Jerusalem. 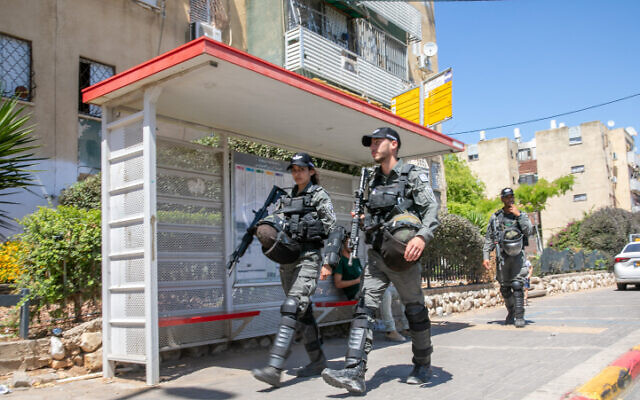 Border Police patrol the streets of the central city of Lod after last week’s riots. May 19, 2021 (Yossi Aloni/Flash90)

While police crackdowns brought the rioting under control after about a week, tensions are still simmering in some areas.

On Monday, police refused to issue a permit for a nationalist march through Jerusalem’s Muslim quarter planned for Thursday, fearing a renewed upsurge in fighting.