BEIRUT, Lebanon (AP) — Daraa was an impoverished, neglected provincial city in the farmlands of Syria’s south, an overwhelmingly Sunni Muslim backwater far from the more cosmopolitan cities of the country’s heartland.

But in March 2011 it became the first to explode against the rule of President Bashar Assad. Assad’s decision to crush the initially peaceful protests propelled Syria into a civil war that has killed more than a half million people, driven half the population from their homes and sucked in foreign military interventions that have carved up the country.

On the 10th anniversary of the protests, The Associated Press spoke to activists from Daraa who set aside their lives to join the marches in the streets, then paid the price in torture and exile. Unable to return home, they continue from abroad to support a cause that they hope can still prevail, despite Assad’s military victories.

After a decade of bloodshed, Daraa is back under Assad’s rule, but only tenuously.

Boiling with resentments, battered by an economic crisis and rife with armed groups caught between Russia, Iran and the government, the uprising’s birthplace still feels perched on the rim of an active volcano.

In Daraa, officers summoned known activists and warned them not to try anything. Small initial protests were quickly pushed back by security.

Then graffiti appeared around the city. One caught everyone’s attention: “Your Turn Has Come, Doctor,” a reference to Assad, who was an ophthalmologist before inheriting rule from his father Hafez. When the boys who wrote the graffiti were arrested and tortured, Daraa’s population erupted in anger.

They were the first to die in what would become a decade of death.

Ahmed al-Masalmeh, then 35 and the owner of an electronics shop, was at the Omari Mosque that bloody day. He was helping organize protests, bringing in people from neighboring villages. He kept at it as rallies spread and more “martyrs” fell. When security forces fired on protesters toppling the statue of Hafez Assad in Daraa’s main square, he helped carry away the wounded. Eight died that day.

Al-Masalmeh had expected rubber bullets and tear gas against the protests — not gunfire seemingly aimed at the head and chest. In this age, he had thought, Syria’s rulers couldn’t get away with what Hafez Assad had in 1982, killing thousands to crush a revolt in the city of Hama.

“We thought the world has become a small village, with social media and satellite stations,” he told the AP. “We never expected the level of killing and brutality and hatred for the people to reach these levels.”

From Damascus, university student Nedal al-Amari watched the March 18 mayhem in his home city on TV.

Al-Amari, who had just turned 18, was the son of a parliament member from Daraa; it was his father’s connections that had got him a spot at the university in the capital, studying acting.

Al-Amari jumped in a car, headed down the highway and arrived home to join in. 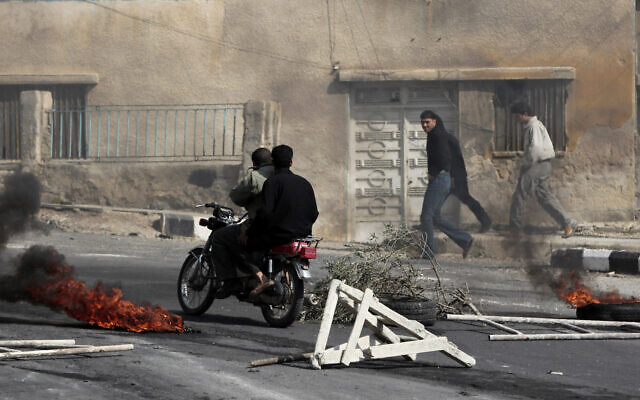 His father was not happy.

“If you think this this regime will fall because of a scream or millions of screams, then you know nothing about this regime,” his father told him. “It is ready to turn over every stone in this country to remain in power.”

The teen dismissed his father’s warning. It was the talk, he felt, of an older generation paralyzed by fear ever since Hafez Assad’s ruthlessness in 1982.

The young would not be cowed.

Al-Amari, who spoke some English, picked up a camera, set up two computers and together with friends created a media center. It was one of the first of many that sprang up around Syria, communicating the conflict to the world.

He filmed the marches and the deadly assaults against them by security forces. For the first time, he saw dead bodies. It changed him, he said, creating a sense of fearlessness bolstered by the camaraderie with his fellow activists.

That bravado would turn into trauma.

Within days, al-Amari and his colleagues were rounded up.

In detention, the first thing al-Amari was forced to do was kneel on the floor and kiss a picture of Assad. Then the daily routine of torture set in. Beatings and electrocutions from guards — but also, prisoners were forced to torture each other, to beat each other or ram metal objects into the anus.

“You’d be tortured while (they force you into) torturing others,” al-Amari said. 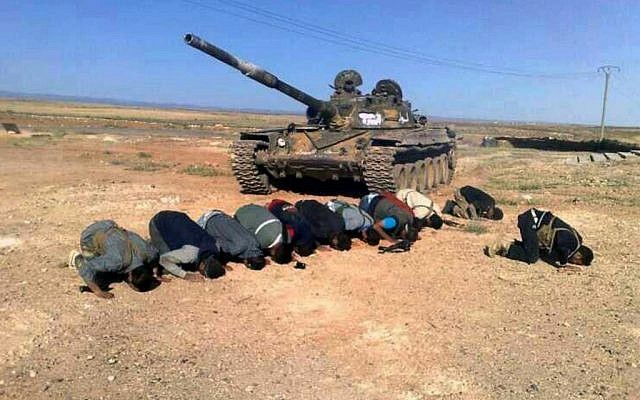 Syrian rebels pray in front of their tank at al Mutayia village in the southern province of Daraa, Syria, April 30, 2014. (AP/the Syrian Revolution Against Bashar Assad)

For four months, his parents didn’t know where he was, until al-Amari was beaten so badly he nearly lost his eyesight. He was taken to a military hospital and a cousin who worked there happened to see him. Soon after, he was released and dumped on the street.

Over the course of the war, more than 120,000 people have similarly disappeared into government detention. Under relentless torture, thousands are known to have died. Tens of thousands remain missing.

Al-Amari emerged a broken and tormented soul. He spent a month recovering at his family’s half-bombed home, his mother sleeping beside him to keep him company.

Meanwhile, armed opposition groups were arising to fight back against the crackdown. Al-Amari’s brother joined one.

Al-Amari picked his camera back up and covered the battles. He threw away caution, no longer hiding his name. Across the country, as the viciousness grew, so too did the sectarian fever between a largely Sunni Muslim rebellion and Assad’s state centered on his Alawite minority.

“My fear turned into spite and hatred. I hated Shiites, I hated Alawites,” al-Amari said.

When four of al-Amari’s cousins in Damascus were detained, it became clear the family would pay the price for his activities. His father slapped him, angry and afraid, and told him it was time for him to go. The cousins have not been heard from since.

On December 22, 2011, al-Amari left Syria. After several years in Lebanon, he reached Turkey. From there, he joined the massive wave of Syrians and other refugees and migrants who in 2015 by the hundreds of thousands crossed in small boats on dangerous sea trips from Turkey to Greece.

At its height in 2013 and 2014, the rebellion controlled most of Syria east of the Euphrates, parts of Daraa province and much of the north. It battled for all the major cities and even threatened Damascus from the surrounding countryside.

Assad’s forces unleashed airstrikes, devastating barrel bombs and chemical attacks. The tide turned when his allies, Moscow and Tehran, stepped in directly, first Iran with military experts and allied Shiite militias, then Russia with its warplanes.

Sieges and military campaigns against opposition-held cities and towns flattened neighborhoods and starved populations into submission. When the government retook the northern city of Aleppo in 2016 — destroying nearly half of it — it spelled the end of the rebellion’s military threat to Assad’s rule. 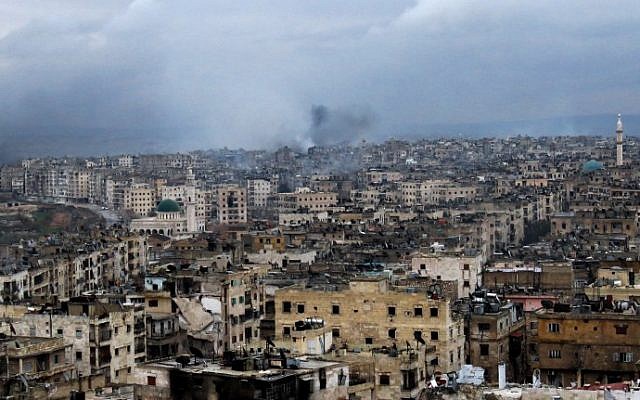 In the northwest, the opposition became confined to a shrinking enclave centered on Idlib province, dominated by Islamic militants and surviving only because of Turkish protection.

In the south, government forces backed by Russia overwhelmed Daraa province in August 2018.

While recaptured, Daraa was far from controlled.

It has come under a unique arrangement mediated by Russia, partially because of pressure from Israel, which does not want Iranian militias on its doorstep, and from Jordan, which wants to keep its border crossings open.

In parts of Daraa province, rebel fighters who agreed to “reconcile” remained in charge of security. Some joined the 5th Corps, which is technically part of the Syrian Army but overseen by Russia. In these areas, state and municipal institutions have returned, but government forces stayed out.

Elsewhere, Russian and government troops are in charge together in a watered-down government authority. In the rest, the government is in outright control, and the Syrian army and Iranian-backed militias have deployed.

The organized opposition presence gives a margin for protests and overt anti-government sentiment hard to find elsewhere. Some rebels rejected the deal with Russia and are waging a low-level insurgency. 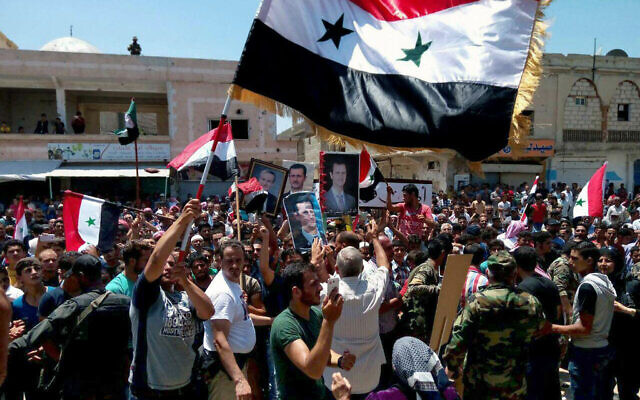 In this photo released Tuesday, July 17, 2018, by the Syrian official news agency SANA, Syrians celebrate as they hold their national flags and pictures of Syrian president Bashar Assad, in the town of al-Hrak, Daraa province, Syria. (SANA via AP)

A string of killings, mainly by insurgents, has left more than 600 dead since June 2019, according to the Syrian Observatory for Human Rights. The dead include government troops, pro-Iranian militiamen, rebels who signed onto the Russia deals, and mayors and municipal workers considered loyal to the government.

The volatile mix paints a possible scenario for Syria’s near future: A war that Assad can dominate but not outright win, foreign powers trying to patch together arrangements, and a population still boiling with dissent and drowning in an economic crisis.

To give a veneer of normalcy and placate foreign backers, Assad plans presidential elections this summer — in which he is the only candidate.

Assad’s forces are too exhausted to deal with another revolution, said Hassan Alaswad, a prominent activist lawyer from Daraa who fled the country. Now in Germany, he remains involved in opposition activity in Syria.

Among Daraa’s population, “there’s no such thing as fear anymore,” Alaswad said. In the town of Tafas, a Russian general met local notables and asked them if they will vote for Assad in the upcoming election. All of them said no, calling him a war criminal. 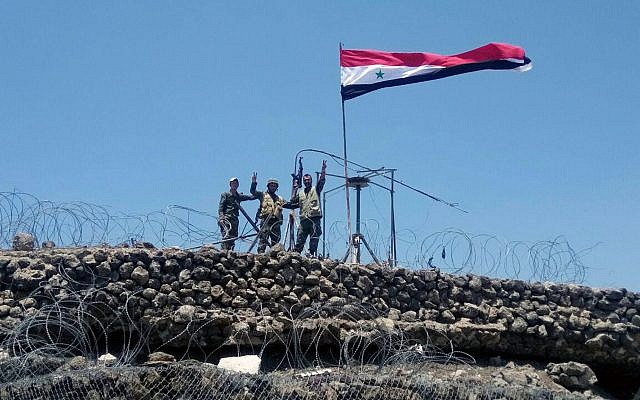 Illustrative: Syrian troops flash the victory sign next to the Syrian flag in Tel al-Haara, the highest hill in the southwestern Daraa province, Syria, July 17, 2018. (SANA via AP)

Daraa has seen frequent mass protests against the government and Iran, reflecting a growing concern over Tehran’s expanding influence. Iranian-backed militias recruit young men attracted by a stable salary. Families loyal to the government or Iranian-backed fighters are reportedly settling in villages in the south. Traders linked to Assad and Iran have exploited the destitution in Daraa to buy up land, said al-Amari. Pro-Iranian militias are said to be encouraging local Sunni Muslims to convert to Shiism.

Still, the public is also exhausted by the economy’s collapse across Syria. Inflation is spiraling, and there are few jobs. Trade and agriculture are broken down, and infrastructure wrecked.

“The young men still inside Syria are living in despair,” said al-Masalmeh, who fled to Jordan in 2018 but remains involved with activists at home. “We will invest in the despair … to relaunch the revolution again.”

Al-Amari now lives in Germany, learning the language and hoping to go to university. He gives talks on the Syria conflict and his experience with torture and works documenting crimes against civilians.

He’s enjoying his freedom in Germany — he has more freedom as a refugee than most living under the Arab world’s authoritarian regimes, he points out. 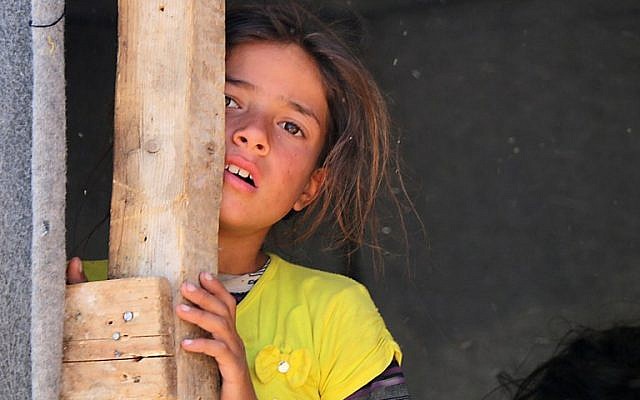 A displaced Syrian girl from Daraa stands in a makeshift camp in Quneitra, southwestern Syria, near the border with Israel, on June 22, 2018. (AFP PHOTO / Ahmad al-Msalam)

He still wrestles with his trauma. “Sometimes the memories are so hard, when I remember how I was tortured, I hate everything that is Alawite on the face of the earth,” he says — even as he also tells himself not every Alawite backed Assad. He worries about “shabiha,” or regime loyalists, living among refugees in Europe, who dissidents fear are targeting them.

And he is inextricably tangled with home. Al-Amari has not seen his family for 10 years. He still breaks down in tears when he talks about home. Tattooed on his forearm is the date of the first protests, March 18.

“We are living and not living,” he said.