BEIT HANOUN, Gaza Strip — An electronics engineer from Gaza, Loay Elbasyouni, had worked with the NASA team that made history this month by launching an experimental helicopter from the surface of Mars.

But he says a potential expedition to his hometown in the Gaza Strip, where posters celebrate his achievement, feels even farther away because of Israeli and Egyptian restrictions.

“When you deal with electrons and technology, you can calculate things and know their path,” he told The Associated Press in a video interview from his home in Los Angeles. “When you deal with people and politics, you don’t know where things can go.”

The 42-year-old has himself made an astonishing journey from the hardscrabble town of Beit Hanoun near the heavily-guarded Israeli frontier to the US space agency’s Jet Propulsion Laboratory in California, where he worked as a contractor helping design the Ingenuity helicopter.

He left Gaza in 1998 to study in the United States and has only returned once, for a brief visit in 2000 prior to the second Palestinian intifada, or uprising, late that year. Some 1,000 Israelis and 6,000 Palestinians were killed in a series of Palestinian terror attacks and subsequent Israeli military operations before the violence ebbed in 2005.

The fighting was especially intense in and around frontier towns like Beit Hanoun. Elbasyouni says Israeli military tanks bulldozed his father’s fruit orchards on four occasions.

Israel withdrew from Gaza in 2005, but two years later the Islamist terror group Hamas seized power from rival Palestinian forces. Since then, Israel and Egypt have maintained a blockade that strictly limits the movement of people and goods in and out of the narrow coastal strip, which is home to more than 2 million Palestinians.

Abdelwahab Elbasyouni, an uncle of Loay Elbasyouni, a space engineer who was part of the NASA team that made history this month by launching an experimental helicopter from the surface of Mars, stands on the porch of the house decorated in accolades to him, where Loay’s family used to live, in Beit Hanoun, Gaza Strip, April 26, 2021. (Adel Hana/AP)

As Gaza weathered one crisis after another, Elbasyouni pursued his studies in the US.

He struggled to afford tuition at the University of Kentucky, especially after the family farm was bulldozed. At one point he said he worked more than 90 hours a week at a Subway sandwich shop to make ends meet. He eventually transferred to the University of Louisville, where he earned bachelor’s and master’s degrees in electrical engineering.

In 2012 he was hired by a technology company that was developing electric aircraft. Two years later, the company was contracted by NASA for the Mars helicopter project, and Elbasyouni was promoted to lead electronics engineer.

He spent six years working alongside other NASA scientists to develop the helicopter’s propulsion system, its controller and other key components.

The robotic helicopter he developed hitched a ride to Mars on the Perseverance rover, which was launched into space on a rocket in July 2020. He said his feelings were “indescribable” when he watched it touch down on the surface of the red planet in February.

Zoom In ????@NASAPersevere’s Mastcam-Z captured the #MarsHelicopter‘s first flight. This video was intentionally targeted on the takeoff and landing zone. The helicopter flew out of the camera’s field of vision but the shadow of it hovering is visible. https://t.co/TNCdXWcKWE pic.twitter.com/ArAUGfDbPU

Elbasyouni followed every moment of the expedition, and nervously awaited any signal the helicopter was working once it was launched. When the first images reached Earth showing the helicopter taking flight, “I screamed in the middle of night and woke up everyone in the building,” he said.

It was a triumph hailed as a Wright brothers moment in the history of flight. Since then, Elbasyouni has done numerous TV interviews with Western and Arab media and become a hometown hero in Beit Hanoun.

But he says he’s unlikely to visit anytime soon because of the travel restrictions.

If he wanted to visit he would have to go through Jordan or Egypt, as Israel does not allow Gazans to fly in or out of its international airport.

In Jordan, he would have to wait for a special shuttle to take him from the Allenby Bridge crossing across the Israeli-controlled West Bank and Israel to the Erez Crossing with Gaza. The irregular shuttle only runs every few days. Each direction would require an Israeli permit, a process that can be complicated, time-consuming and uncertain.

Exit permits from Gaza are usually only granted to patients seeking life-saving medical treatment or a small number of businessmen.

His other option would be to go through Egypt and try to enter Gaza through the Rafah crossing, which only opens sporadically and can be closed for months at a time. Egypt imposes its own restrictions on Palestinians, who must apply for travel permits and sometimes pay exorbitant fees to move up in the line.

He says his father, who retired as a surgeon in 2012 and now lives in Germany, visited Gaza via Egypt in 2019 and was stuck there for seven months before leaving through Israel. 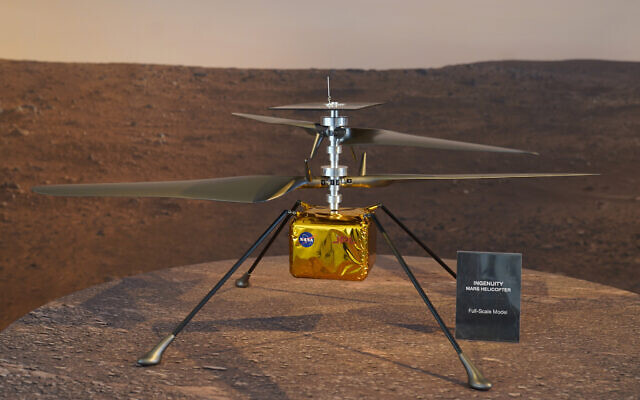 A full-scale model of the Ingenuity helicopter displayed for the media at NASA’s Jet Propulsion Laboratory in Pasadena, California, February 17, 2021. (Damian Dovarganes/AP)

Elbasyouni points out that most Americans, including space engineers, only get two or three weeks off a year. “If you go (to Gaza), you may get stuck and lose your job,” he said.

The restrictions on all sides have been tightened since the start of the coronavirus pandemic but long predate it.

Israel says they are necessary to prevent Gaza terror groups from bringing weapons and war materials in the Palestinian coastal enclave. Hamas, which openly seeks Israel’s destruction, has fought three wars with Israel and is considered a terrorist group by Israel and Western countries. It has launched tens of thousands of rockets aimed at Israeli cities.

COGAT, the Israeli military body in charge of coordinating civilian affairs in the West Bank and Gaza, says it considers individual requests and allows travel for humanitarian cases. Each request, it said, receives “a thorough examination that involves all the relevant professional offices and subject to security considerations.”

Critics of the blockade say it amounts to collective punishment, with generations of Gazans confined to a vast, open-air prison.

Gisha, an Israeli rights group that closely follows the closures and advocates for freedom of movement, says the “severe, sweeping restrictions” mean that “Gaza’s future scientists, entrepreneurs, and innovators are blocked from accessing potentially life-altering educational and professional opportunities outside the Strip.”

Despite the political situation, Elbasyouni says there are still opportunities for Palestinian entrepreneurs and innovators, even in Gaza, and he hopes that he can provide inspiration for young Palestinians.

“Being part of this project that serves humanity is a source of huge pride,” he said.