Yamina MK Matan Kahana, who is expected to serve as religious services minister in the upcoming government, said Wednesday that while major policy on religion and state will not change, he intends to work to reform kashrut and appoint more national-religious rabbis to local positions.

“On those issues regarding which there isn’t full agreement among the members of the nascent coalition, we will maintain the status quo and wait another few years until we can find a solution,” he told Army Radio on Wednesday morning. “Things that haven’t been solved in 73 years probably won’t be solved in the next government.”

Nevertheless, Kahana reiterated that his party intends to appoint city rabbis who hail from a national-religious, and not Haredi, background. “It is only fitting, after years when it was rare, that the national-religious community will have greater representation,” he said.

Kahana also said that one of his priorities in the office will be to reform the state of kosher certification in Israel.

Kahana also said it should “go without saying” that there must be a full government inquiry into the Lag B’Omer disaster at Mount Meron in late April.

“I say also that as the religious services minister-designate, as the one who will be responsible for the next Lag B’Omer event at Meron in 10 and a half months, I feel responsible toward the public to investigate what happened there and to create a plan to ensure it never happens again,” he said.

On April 30, 45 ultra-Orthodox worshipers were crushed to death at a religious festival during Lag B’Omer celebrations at Mount Meron in northern Israel, the deadliest civilian disaster in the country’s history.

Kahana noted that every member of the expected next coalition government “knows that they probably cannot realize their full agendas, and they know that if they start attacking each other, the government won’t survive.” The coalition partners “are coming with a lot of good will so that this government can survive,” even if it means not every item on their agendas can be accomplished, he said.

Kahana also hit back at vitriolic comments made Tuesday by the leaders of the ultra-Orthodox parties, who accused Yamina leader Naftali Bennett, the prime minister-designate, of being wicked and called on him to remove his kippa. 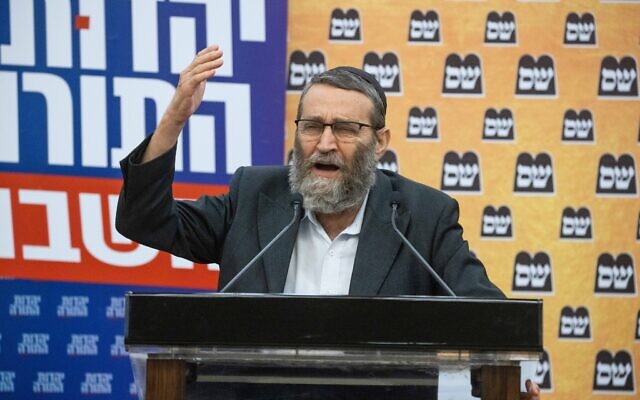 Their speeches were “embarrassing,” said Kahana. “When we were in the opposition and they were in the coalition I don’t think we ever used such crude language.” The Yamina MK said that he does not “need a lesson from any Haredi MK about what it is to be Zionist or what it is to be a God-fearing religious man.”

The Haredi MKs, he suggested, are only “enlarging and deepening the schism and the division in the nation instead of looking for unity and cooperation.” In the incoming government, Yamina will “preserve the values of Judaism, maintain Jewish law, preserve the Land of Israel — and the [Haredi] public knows that very well.”

“The transfer of power in a democratic nation is perfectly fine, it’s natural, it’s not a disaster,” he said. “The sun will still rise on Tuesday morning and I’ll enter my new office with a lot of modesty, because I still have plenty to learn.”

The Knesset is set to hold a vote of confidence in the new government on Sunday, with the parties in the prospective coalition holding a wafer-thin majority of 61 of the 120 votes. If confirmed, the unlikely alliance of right-wing, left-wing, centrist, and Islamist parties would remove Netanyahu from power, to be replaced by Yamina’s Bennett, and, two years later, Yesh Atid leader Yair Lapid.