Defense Minister Benny Gantz was scheduled to depart on Wednesday for a brief visit to France, where he will meet with his French counterpart to discuss a range of issues, including the controversial Israeli cyber firm NSO Group, whose software may have been used to target French President Emmanuel Macron.

Gantz will meet in Paris with French Minister of the Armed Forces Florence Parly to hold discussions on the ongoing crisis in Lebanon and the nuclear negotiations with Iran, as well as to “provide an update on the NSO affair,” the Defense Ministry said in a statement.

NSO Group, an Israel-based cyber firm, has repeatedly been accused of selling its Pegasus spyware to repressive countries that use it to target journalists, activists and politicians. In a bombshell investigation released last week, NSO was accused of selling the spyware to the governments of Azerbaijan, Bahrain, Kazakhstan, Mexico, Morocco, Rwanda, Saudi Arabia, Hungary, India, and the United Arab Emirates, which used it to hack into the phones of dissidents and human rights activists.

According to the report, Morocco used the spyware to track several French journalists, and prosecutors in Paris opened an investigation into the allegations.

The phone numbers of Macron and top members of his government were among those found on a list of 50,000 numbers believed to be potential targets of the Pegasus spyware, although the investigation did not determine if he was actually hacked. Macron reportedly directly called Prime Minister Naftali Bennett last week to demand that Israel investigate the allegations.

Israeli defense officials have said they are looking into the reports of NSO Group’s activities, and will take action if necessary. At a speech at Tel Aviv University last week, Gantz said his ministry was “studying the information,” and asserted that Israel “authorizes the export of cyber products solely to governments, only for lawful use, and exclusively for the purposes of preventing and investigating crime and terrorism.”

French President Emmanuel Macron speaks on his cellphone during a round table meeting at an EU summit in Brussels, on July 20, 2020. (John Thys, Pool Photo via AP)

Ram Ben-Barak, the head of the Knesset Foreign Affairs and Defense Committee, said Israel was establishing a committee to review the allegations against NSO Group. Ben-Barak, a former deputy head of the Mossad spy agency, said that when the panel completes its review, “we’ll demand to see the results and assess whether we need to make corrections.”

The Defense Ministry said earlier that if it finds that NSO Group violated the terms of its export licenses, it will “take appropriate action.” NSO has largely denied the claims made in the in-depth investigation, and called the charges part of an effort “to smear the whole Israeli cyber industry.”

During his visit to France, Gantz and Parly will also discuss the ongoing crisis in Lebanon, which is experiencing political turmoil and an unprecedented economic meltdown, with widespread power outages and a water shortage.

Several weeks ago, Gantz offered humanitarian aid to Lebanon, while vowing not to allow the situation there to spill over into violence aimed at Israel. 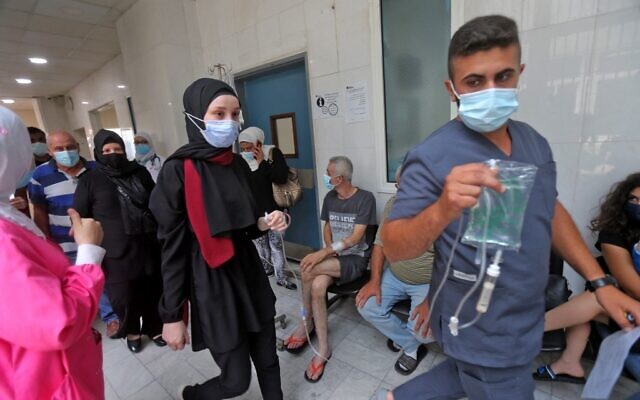 A medic assists a patient as others wait in a hallway at the Rafic Hariri University Hospital (RHUH) in Lebanon’s capital Beirut on July 23, 2021. (STR / AFP)

“As an Israeli, as a Jew and as a human being, my heart aches seeing the images of people going hungry on the streets of Lebanon,” Gantz said. “Israel has offered assistance to Lebanon in the past and today as well we are ready to act and to encourage other countries to extend a helping hand to Lebanon so that it will once again flourish and emerge from its state of crisis.”

France and Lebanon have close relations, and Macron visited the country following a devastating explosion in Beirut last year that killed more than 200 people. Israel also offered assistance at the time, but its efforts were rebuffed.