Blue and White leader Benny Gantz on Monday night said he “was wrong” to have shaken Benjamin Netanyahu’s hand and enter into his coalition earlier this year, but pleaded for an alliance of all who oppose the premier, in order to boot him from office.

“Three times, we were close to ensuring that he’d end [his job],” Gantz said at a press conference in Tel Aviv.

But when the coronavirus ravaged Israeli earlier this year, the Defense Minister said, “I, a soldier of the State of Israel, stood forward. I shook the hand of this man I had promised to replace. I shook the hand of a serial promise-breaker. I shook it because Israel was at war and I am first and foremost its soldier.”

While he campaigned on the promise that he would not sit in a government with Netanyahu so long as the prime minister faces corruption charges, Gantz agreed to do just that in late March, and formed a unity government with Netanyahu in May. Furious, Yesh Atid and a second minor faction (Moshe Ya’alon’s Telem) broke away from Blue and White and went into the opposition. Blue and White has watched its popularity plummet since, leading to a hemorrhaging of lawmakers who have left the party since elections were called last month.

“I was wrong,” Gantz said Monday. “You who believed in me were disappointed.”

Gantz has repeatedly been asked since the coalition collapsed late last month whether he erred in entering a coalition with Netanyahu in May, abandoning his three-election pledge to Blue and White voters not to do so. Monday’s speech marked the first time he publicly declared that he had made a mistake.

“While tens of thousands of businesses collapsed and the population suffered under the strains and restrictions of the pandemic,” Gantz said, Netanyahu continued “to incite and divide, simply because it serves his personal interests, and to allow him to escape the courthouse… He deceived me, he deceived you, he deceived one too many times. Now he must pay.”

Turning to the leaders of the array of center-right and center-left parties that have popped up in recent weeks, Gantz called for an alliance of multiple parties that oppose Netanyahu’s continued rule, implying that he does not assume he would head such an alliance.

“This is an hour of emergency. We cannot let [Netanyahu] smash us into slivers of parties,” he said.

“I call on all those for whom Israel is important, on all those who will not go with Bibi, to let go of their egos,” he said, using Netanyahu’s nickname. “Let’s go into a room tomorrow, and find solutions. We will unite for the good of the country, without ego and past grievances. I am willing to sacrifice much for Bibi to go. If we get rid of our egos, we’ll get rid of Bibi.”

Lapid, whose Yesh Atid is projected to be the largest of the parties mentioned by Gantz (at around 15 seats), has in the past said he would be open to a possible union with Gantz once more — but only if he leads the slate. 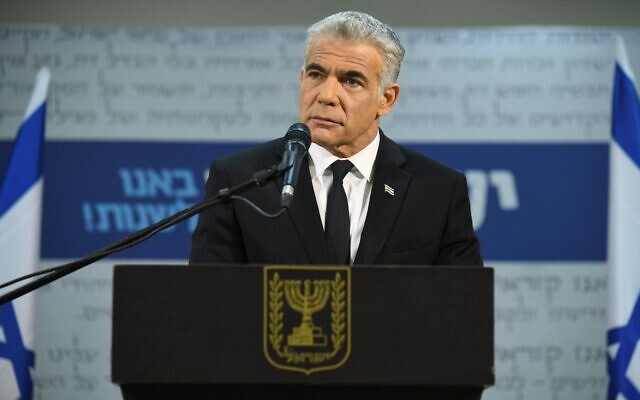 Responding to the announcement, Yesh Atid said it would “make every effort to form alliances that will lead to a sane, liberal government that will change the country.”

A party source, however, told The Times of Israel that “Serious people know how to manage serious negotiations and it isn’t through the press.”

“We had a chance to replace Netanyahu,” he tweeted. “But you chose to be a ‘backup prime minister.’ The only thing you can do now for the country is to announce you’re not running for the next Knesset.”

Meretz chair Nitzan Horovitz similarly dismissed the call to unite, saying in a statement, “Ganz, three times we recommended you to be prime minister, and you threw the [anti-Netanyahu] bloc in the trash and spat in the face of your constituents. You did the one thing you promised you would not do and you gave Netanyahu a government.”

Before Gantz’s address, MK Ofer Shelah, who split off from Yesh Atid to form the Tnufa party, called for an alliance with the Labor party and Huldai’s The Israelis.

“A little more than two months before election day, the political map is hazy, but the center-left bloc is shattered,” Shelah said in a statement. “I call on Ron Huldai, Avi Nissenkorn, and the leaders of the Labor party: Let us sit together. You all know me. There are no preconditions. Let’s negotiate and form the body that an entire camp yearns for.”