Defense Minister Benny Gantz is poised to form an investigative committee into the so-called submarine affair, Israeli television reported Wednesday, in a move that could inflame tensions with Prime Minister Benjamin Netanyahu and imperil the already dysfunctional unity government.

The affair, also known as Case 3000, revolves around allegations of a massive bribery scheme in the multi-billion-shekel state purchase of naval vessels from German shipbuilder Thyssenkrupp. The scandal has embroiled several close associates of Netanyahu, as well as high ranking military officials, but not the premier himself, despite claims by former defense minister Moshe Ya’alon that Netanyahu led an improper effort to buy the submarines from Thyssenkrupp.

According to Channel 12 news, the committee would be established under military law, which would require any citizen who is summoned — including Netanyahu and his associates — to appear or face possible imprisonment.

The committee will focus on the acquisitions process in the military and isn’t meant to initiate criminal proceedings, the report said.

The makeup of the committee still hasn’t been decided on, but the network said the aim is for it to be headed by a former Supreme Court or District Court judge, along with two people familiar with acquisitions in the Israel Defense Forces and the Israeli Navy.

Gantz’s office confirmed he was considering opening the probe, but said no final decision has been made.

“As the defense minister has said a number of times, in his own voice, the defense establishment has been instructed to consider the option of forming an investigatory committee,” his office said in a statement.

“When the deliberation ends and a decision is reached — we will update you.”

The formation of the committee would likely bring down the unity government between Netanyahu’s Likud party and Gantz’s Blue and White, which was sworn in in May after three straight inconclusive elections.

On the campaign trail, Gantz called for a state commission to probe the submarine affair, but in recent months Blue and White has refrained from voting on several bills to establish an investigative committee, all of which were shot down due to a lack of support in the Knesset. “Just four months ago Gantz explained that there’s no reason to investigate the recycled submarine affair,” Netanyahu’s Likud party said in response to the TV report. “The answer: Blue and White is crashing in the polls and looking for a way to gather votes with worthless tricks against Prime Minister Netanyahu.”

In addition to the questions surrounding the submarines, which were purchased despite questions from the military over the need for them, Israel also bought four advanced Sa’ar 6-class corvettes from Thyssenkrupp under similarly unclear circumstances. Though the Israeli Navy maintains that there was a clear need for the ships, which will be used to defend the country’s natural gas extraction platforms, questions remain over the decision to purchase the vessels from the German firm, instead of opening the contract to other companies.

In October, the state prosecution told the High Court of Justice that it believes there is no justification to open a criminal probe into Netanyahu over the matter.

Netanyahu is on trial for fraud and breach of trust in three other cases, and bribery in one of them. He denies any wrongdoing and claims to be a victim of an attempted political coup involving the police, prosecutors, left-wing opposition and the media. 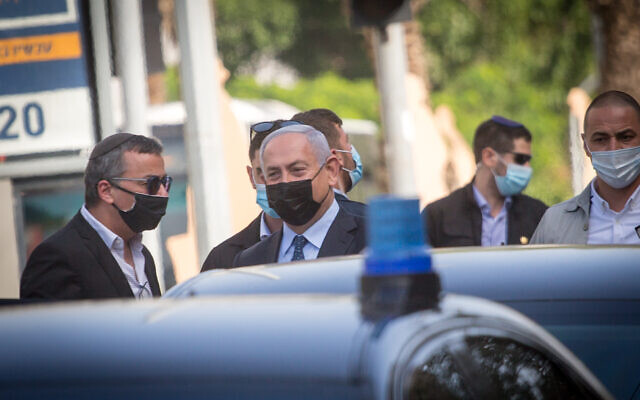 Prime Minister Benjamin Netanyahu seen surrounded by security as he enters his car, after an unofficial, surprise visit in Givatayim, near Tel Aviv on November 9, 2020. (Miriam Alster/Flash90)

Also Wednesday, Channel 13 news reported that Netanyahu and Gantz discussed the ongoing impasse over the state budget during a meeting on Tuesday, but did not reach any agreements.

The report came amid increasing rhetoric from Blue and White lawmakers — led by Gantz himself — indicating that the current unity government is coming to an end over the budget issue and cabinet squabbling that has hampered governance.

If no budget is passed by late December the government will automatically dissolve. Netanyahu is widely believed to be stalling on the budget in order to call snap elections and avoid an agreed-upon handover of power next year to Gantz as part of their coalition agreement.

Netanyahu has demanded a single-year budget, in contravention of the deal, citing the uncertainty caused by the coronavirus pandemic. Blue and White suspects he wants to leave himself a window to bring down the government during 2021 budget talks next year.

The initial budget deadline had been in August, with a failure to pass the 2020-2021 budget by then requiring the Knesset to dissolve. But Likud and Blue and White agreed to a last-minute compromise that gave the parties until December 23.