A day after the start of a ceasefire between Israel and Gaza, Defense Minister Benny Gantz said Friday night that Israel will eventually succeed in killing the head of Hamas’s military wing, Muhammad Deif, and warned that all Hamas leaders remained potential targets.

Gantz, speaking to Channel 12 news, also called for a major international effort to rebuild and develop Gaza to improve the lives of its residents.

As Hamas celebrated its ostensible gains in the 11 days of combat, Gantz dismissed such claims.

“We achieved all the goals we set for ourselves — severely hitting Hamas, its operatives, infrastructure and anything to do with its offensive capabilities,” he said. Meanwhile, he said that other than rocket fire — much of which was intercepted by Israeli defenses, “Hamas didn’t manage to do anything effective.”

While Hamas will “always push the victory narrative,” he asserted, in truth “Gaza is in ruins because of Hamas’s actions.”

Asked how long he believed the calm would last, Gantz said: “The next round may be very far off, may be very near. It depends on Hamas’s behavior. We will not return to the reality before [the operation].”

It was revealed this week that during the latest operation, the Israel Defense Forces attempted to kill Deif at least twice, but both times he escaped unscathed.

“It will not be the last time we try,” Gantz said. “We’ll succeed in the end… For all Hamas leaders responsible for firing and launching terror against civilians — their blood is on their own hands.”

Gantz called for a major international effort to rebuild Gaza, that would involved the Palestinian Authority, countries of the region and others.

“If we are only pulled toward where the extremists take us, nothing good will grow,” he said. “We need to look for moderate channels and condition [aid] on proper civil development of the Gaza Strip.” 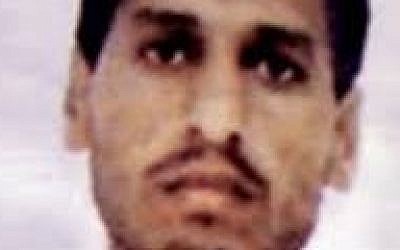 Earlier in the day Gantz said the truce created an opportunity for peace and it was now time for diplomacy to build a new reality “on the rubble of the homes of the Hamas leaders.” He added: “If we don’t act diplomatically, quickly and wisely,” this operation will go down as “simply another round of conflict to be followed by the next one.”

But he stressed that such a project would depend on the return of Israeli prisoners and the bodies of slain soldiers that have been held by Hamas for long years.

Earlier Friday Prime Minister Benjamin Netanyahu vowed that henceforth Israel would take a much tougher stance toward Hamas, and that any future rocket fire from Gaza would be met with “a whole new level of force.” He said Israel had achieved its military objectives in Gaza with “extraordinary” success.

The prime minister said that the “rules of the game were changed” and there would now be no tolerance of any rocket fire from the Gaza Strip.

“We changed the equation not only as regards to the operation but also as regards the future. If Hamas thinks we will tolerate a ‘drizzle’ of rockets, it is mistaken,” the prime minister said, referring to the sporadic fire often seen from Gaza between rounds of more major conflict in recent years.

“We will respond with a whole new level of force to every instance of aggression against the Gaza-envelope communities or anywhere else in Israel,” he said.

The prime minister also said that the success of the entire operation — including the thwarting of Hamas drones and most rocket attacks, via an improved Iron Dome missile defense system, and countering Hamas attempts to attack from the sea — meant that the terror group would be more careful in the future about attacking Israel.

“Most of Hamas’s capabilities have been harmed — far more seriously than Hamas commanders imagined. Hamas thought it could fire on Jerusalem and the cities of Israel, and we would just react with business as usual,” the prime minister said.

The premier said that Israel fulfilled its objective to deal Hamas a “blow it cannot imagine” by destroying the terror tunnel network it built in Gaza; the military turned it into a “death trap.”

The prime minister said that although the terror group wanted to carry out many cross-border attacks — including at the tail-end of the operation — it was thwarted by Israel’s subterranean barrier, which detected and “destroyed” the terrorists.

Netanyahu added that not everything regarding the outcome and impact of the Israeli strikes is yet known to the public, or even to Hamas: “We did daring and innovative things, without getting dragged into an unnecessary misadventure.”

Aboveground, he said Israel killed over 200 terrorists, including 25 senior officials.

“And those who didn’t die, know today that we can reach them everywhere– above or below ground,” the prime minister said, calling it “an achievement no military has ever achieved.” 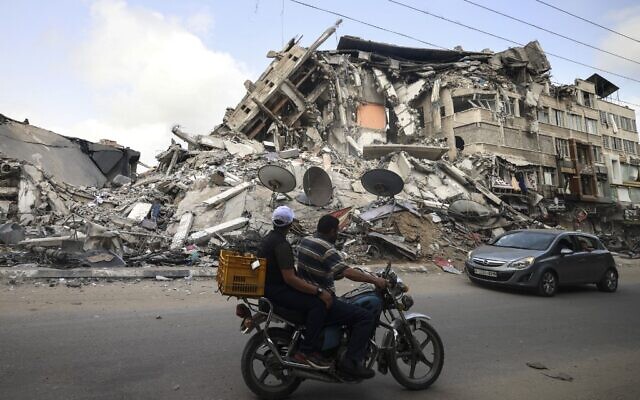 Palestinians ride past the Al-Shuruq building, destroyed by an Israeli air strike, in Gaza City on May 21, 2021, after a ceasefire was agreed between Israel and Hamas (MAHMUD HAMS / AFP)

Hamas may be bragging as it emerges from the tunnels, he said, “but they realize the destruction they brought upon themselves inside Gaza… they know we set them back years.”

The premier said the IDF made “extreme efforts” not to harm civilians, and that no other country in the world takes such steps.

Netanyahu said he was sad for every civilian killed in the fighting. Israel caused maximum casualties to the Hamas terror group while minimizing Israeli casualties, he said.

Referring to apparent criticism that the ceasefire does not provide for the return of Israeli captives held in Gaza, Netanyahu said that Israel has not forgotten civilians Avera Mengistu and Hisham al-Sayed and the bodies of IDF soldiers Hadar Goldin and Oron Shaul, and is committed to returning them home.