Blue and White leader Benny Gantz on Tuesday reached out again to Yesh Atid’s Yair Lapid, saying that he is not under the delusion that he will be premier after the March elections and that his former political partner can head up the bloc of parties opposing Prime Minister Benjamin Netanyahu.

“I think we have a common goal. In the case of Lapid and myself, there are also many shared common values about the things we would like to achieve. The only place we would disagree was whether to enter the unity government. I believe it is possible to reach common agreements again,” Gantz said, a day after he admitted for the first time that he “was wrong” to have entered Netanyahu’s coalition earlier this year.

“I do not delude myself that I will be prime minister after the election,” Gantz told the Kan public broadcaster. “I intend to sit down with anyone who is interested to see what the mechanisms are that will allow a joint run in the Knesset that will prevent a loss of votes, and so that Netanyahu can eventually be replaced.”

“Yair has come a very long way in Israeli politics and he can stand at the head of the [center-left] bloc. He has come a long way, and if that is what we decide then yes,” Gantz said.

Prime Minister Benjamin Netanyahu (right) and Blue and White party leader Benny Gantz at the Knesset, May 17, 2020, after the new government was sworn in. (Alex Kolomoisky/POOL)

According to Channel 12, Gantz reached out to all the parties that oppose Netanyahu and asked for a meeting on Tuesday evening but was snubbed. A party source told The Times of Israel on Monday that “serious people know how to manage serious negotiations and it isn’t through the press.”

Gantz, who entered politics two years ago vowing to replace Netanyahu, merged his nascent Israel Resilience party with Yesh Atid to form Blue and White under his leadership, and narrowly failed in three elections to form a coalition without Netanyahu’s Likud. While he campaigned on the promise that he would not serve in a government with Netanyahu so long as the prime minister faces corruption charges, Gantz agreed to do just that in late March, and formed a unity government with Netanyahu in May.

Furious, Yesh Atid and a second minor faction (Moshe Ya’alon’s Telem) broke away from Blue and White and went into the opposition. Blue and White has watched its popularity plummet since, leading to a hemorrhaging of lawmakers who have left the party since elections were called last month.

On Monday, Gantz pleaded for an alliance of all who oppose the premier in order to boot him from office.

Responding to the Monday announcement, Yesh Atid said it would “make every effort to form alliances that will lead to a sane, liberal government that will change the country.”

Lapid has in the past said he would be open to a possible union with Gantz once more, but only if he himself leads the slate. 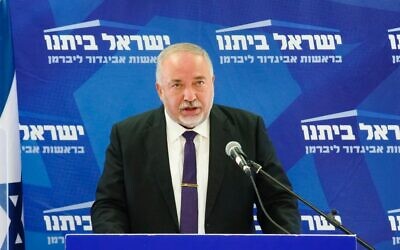 Yisrael Beytenu chair Avigdor Liberman castigates the government’s handling of the COVID-19 crisis, at the opening of his weekly faction meeting in the Knesset, September 7, 2020. (Yisrael Beytenu)

Not mincing his words, Yisrael Beytenu chief Liberman on Tuesday straight out rejected Gantz’s call for an alliance.

“Benny, there is no point in a meeting whose whole purpose is to secure your seat in the next Knesset. You missed your opportunity to replace Netanyahu. We have 1,300,000 reasons not to believe you,” Liberman said.

The New Economic Party’s Zelekha also dismissed the request for unity from the Blue and White chief.

“I refused to meet with Benny Gantz,” Zelekha said. “The economy is in a deep crisis, and politicians are running around like crazed mice trying to find a work arrangement for the next Knesset. I am not looking for a job arrangement, certainly not alongside those who were full partners in abandoning the middle class and the self-employed while enjoying a full and secure salary.” 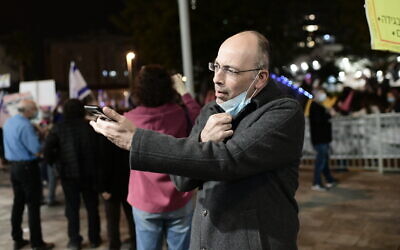 Meretz chair Nitzan Horowitz similarly dismissed the call to unite, saying in a statement, “Gantz, three times we recommended you to be prime minister, and you threw the [anti-Netanyahu] bloc in the trash and spat in the face of your constituents. You did the one thing you promised you would not do and you gave Netanyahu a government.”

Before Gantz’s Monday address, MK Ofer Shelah, who split off from Yesh Atid to form the Tnufa party, called for an alliance with the Labor party and Huldai’s The Israelis. Current polls show Tnufa failing to pass the electoral threshold. Labor faces the same danger, while Huldai’s party is polling at around six seats.

Meanwhile, former Blue and White MK and tourism minister Asaf Zamir announced on Tuesday that he would not be running  in the March elections, having been told by Gantz that he will not be included on the party’s electoral slate due to his decision to vote against extending the budget deadline, ultimately causing the fall of the government. 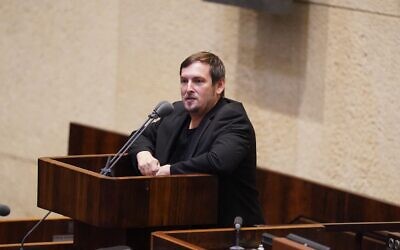 “I ran in the Blue and White framework three times. I believed in this party and did my best to make it successful, but it’s over. There are too many players on the field, too many small parties and too little time for connections,” said the former deputy mayor of Tel Aviv, who has been touted as a possible successor to Huldai, having previously failed to oust him.

Recent opinion polls show Blue and White, which won 33 seats in March, hovering just above the electoral threshold at four or five seats.