Defense Minister Benny Gantz, who roared onto the political scene two years ago as the lion of the center-left only to lie down with Likud, is now sheepishly returning to camp, looking for a second- or third-place slot on whatever party slate will take him.

On Monday night, Gantz officially jumped into the all-too familiar fray of pre-election mergers and acquisitions among Israel’s political parties. It’s a process that will go down to the February 4 wire, the deadline for parties to submit their election slates for the 24th Knesset.

If the last three campaign cycles are any indication, the politicians will hem and haw until the last second about possible unions, though many differ from each other by only hairline nuances. Gantz last night became the first party leader to make a grand public gesture proposing a consolidation of nearly all of the parties in order to topple Israel’s longest-serving prime minister, even without him as head of such an alliance.

“I am willing to sacrifice much for Bibi to go. If we get rid of our egos, we’ll get rid of Bibi,” he said, using Benjamin Netanyahu’s nickname.

“We cannot let [Netanyahu] smash us into splinters of parties,” added the man who on March 26, 2020, splintered his own party by joining with Netanyahu, leaving many of his more than a million voters upset.

Blue and White leader Benny Gantz, in a January 11, 2021, speech, says he was wrong to partner with Prime Minister Benjamin Netanyahu. (Elad Malka)

Gantz, who led a party of 33 seats last March, is now polling at 4-5 seats and is in danger of falling below the 3.25 percent threshold for entering the Knesset and disappearing from political life. Most of his party’s senior ministers left and despite the fact that he’s still defense minister – ostensibly the country’s second most powerful position – Gantz is losing steam by the minute. 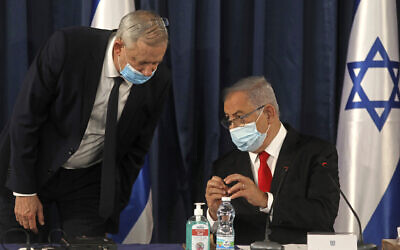 Thus his decision to beg for a political lifesaver. And while he may not have much political capital left, he has one thing none of the other leaders of small center-left parties do: actual capital — to the tune of nearly NIS 20 million in cold, hard campaign financing. While few MKs remain in his Blue and White faction, the party will still get NIS 1.138 million for each of the 14 he entered the coalition with due to the fact that each of the mutineers split off solo, leaving the money behind.

Rather than tell his erstwhile partner Gantz where he can shove his alliance, Yesh Atid leader Yair Lapid quickly expressed a willingness to go along with the idea: “We shall make every effort to form alliances that will lead to a sane, liberal government that will change the country.”

‘We haven’t missed him’

But campaign money can’t buy you love, or credibility. Yesh Atid sources told The Times of Israel that Gantz had already broken his most important promise — not to join Netanyahu — snatched half of the allied party’s seats and brought them into the dysfunctional 35th “unity” government. So how can Lapid take him back and trust him now?

To get the team back together, Gantz will need to sacrifice more than his leadership role. He’ll need to let go of Blue and White and enter as a member of Yesh Atid, stripping away his ability to split again as a breakaway faction immediately after the March 23 vote. Only then will Lapid consider renewing his vows. Otherwise, it’s still splitsville. 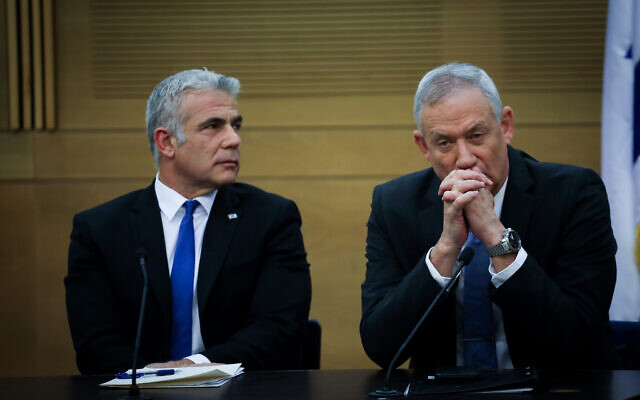 Blue and White party chairman Benny Gantz (R) and No. 2 Yair Lapid at a faction meeting in the Knesset on November 18, 2019. (Hadas Parush/Flash90)

Senior party sources were less than gung-ho on the prospect of rejoining forces with Gantz, noting that one does not generally mend a fractured relationship by going on national TV.

“We haven’t missed him,” a senior party source told ToI, referring to Gantz. “We’ll look into any possibility, but if [Gantz] was serious, it shouldn’t have been done at a press conference. Rather he could have used a discreet third party and kept talks under wraps.”

It has been nine months since Gantz and Lapid last met one-on-one . On Monday, Gantz tried to apologize and explain why he chose to be part of Netanyahu’s fifth government. But scars remain over the manner in which he broke Blue and White apart.

United we stand a chance

At least half of said parties are not expected to win the four seats necessary to enter the Knesset. Lapid, whose party is the only one of the roster projected to win a double-digit number of seats, stands as the bloc’s presumed leader.

Even if Lapid and Gantz don’t kiss and make up, other pacts within the constellation of parties may emerge. All players in the bloc realize that running in their current balkanized state will mean throwing away hundreds of thousands of votes om the parties that don’t make the cut and likely granting Netanyahu another victory. 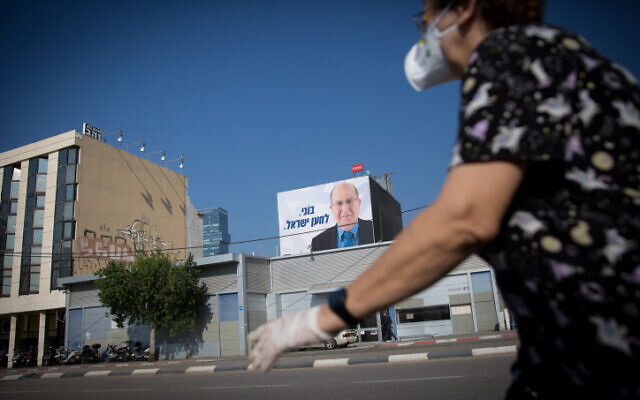 Some of the parties will look into whether a merger would excite the base enough to pump their numbers up beyond what they would get running separately — like a Yesh Atid-Yisrael Beytenu merger.

Other, smaller parties will look to join up out of necessity, or may just drop out to keep from weakening the bloc. The toughest choices will be faced by those right on the seam that might make it in alone, but can’t be sure. 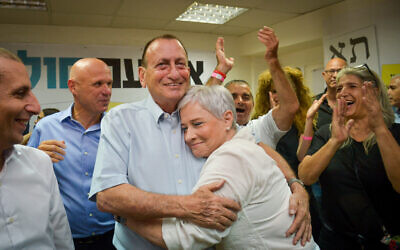 Tel Aviv Mayor Ron Huldai celebrates with his wife at his campaign headquarters after winning the Tel Aviv municipal elections on October 30, 2018. (Flash90)

The Israelis, led by Tel Aviv’s popular mayor Ron Huldai, is one such party tottering near the threshold and needing to rethink its approach. Huldai kicked off his Knesset bid by declaring that the contest is between him and Netanyahu.

His first slogan, “There are only two leaders in Israel, make your own pick,” is less than convincing for a party polling with five or six seats by current projections, and whose leader didn’t even declare himself a contender for the premiership.

Unless his numbers pick up, Huldai will likely need to join up with someone else, or drop out altogether. 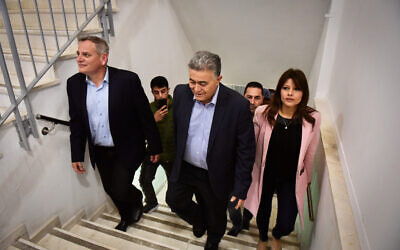 The heads of the Gesher, Labor and Meretz party, Orly Levy, Amir Peretz and Nitzan at the party headquarters on elections night, in Tel Aviv on March 2, 2020. (Avshalom Sassoni/Flash90)

Leftist stalwart Meretz is another party ripe for a union, though party head Nitzan Horowitz has said that “lessons were learned” from its decision to join forces with Labor and Gesher, both of which defected to Netanyahu’s coalition after the election.

Meretz says it is dead-set against any union with another party, and appears to be positioning itself as a Jewish-Arab alliance instead, placing two Muslim candidates among its top five.

The smallest new parties, such as Shelach’s Tnufa and Zelekha’s New Economics, are the ones that are positively itching to unite with others. For them, with no chance of making it into the Knesset on their own according to polls, it’s a matter of join up or die trying.