Palestinians reported a record 1,268 new coronavirus cases on Wednesday, half of them in Gaza, as officials in both the Palestinian Authority and Hamas resisted calls to impose a second general lockdown.

Gaza health authorities identified 600 new coronavirus cases in the past 24 hours, setting a new record for daily infections in the coastal enclave for the third consecutive day.

The Hamas-run Gaza health ministry said on Wednesday that 22 percent of tests in the past 24 hours came back positive, indicating that the virus could be spreading widely undetected. As recently as a week and a half ago, 5%-10% of tests were coming back positive in the enclave.

There are currently 3,806 active coronavirus infections in the Gaza Strip, the ministry said. Around 234 have been hospitalized and 61 are critically ill, Gaza health official Majdi Daher said in a statement. Hamas has previously said that it has around 500 intensive-care beds in its health care system.

After the first cases of community spread were discovered in Gaza in late August, the Strip entered a lockdown which lasted nearly a month and a half. Weakened by a 14-year blockade by Israel and Egypt aimed at preventing Hamas from procuring deadly weapons, as well as poor governance by the terror group, authorities feared the coastal enclave’s health system could not withstand a wider outbreak.

The coronavirus pandemic and the subsequent lockdown had a tremendous economic impact against an already ailing Gaza Strip. According to the United Nations, around 17% of Gazans have lost their jobs since the beginning of the pandemic, raising the unemployment rate to over 60%.

Mindful of the economic impact, Hamas authorities are hesitant to declare a second lockdown despite the rise in infections.

Hamas officials have pleaded with the public to follow the rules lest a return to total lockdown becomes an inevitability.

“The interior ministry has taken a number of precise measures to avoid a return to lockdown, given the burdens that it would impose on all sectors of society,” said Hamas interior ministry spokesperson Iyad al-Bozm.

Even as cases began to surge over the past few weeks, health officials continued to loosen restrictions in an attempt to allow some return to normal life, reopening markets, then mosques, and even some schools.

Three weeks ago, Hamas launched a “traffic light plan” and began classifying Gaza neighborhoods as red or green depending on their rate of coronavirus infection. The terror group’s interior ministry began applying restrictions to a few neighborhoods in the northern Gaza Strip in an attempt to stop the spread of infection, seemingly without success. 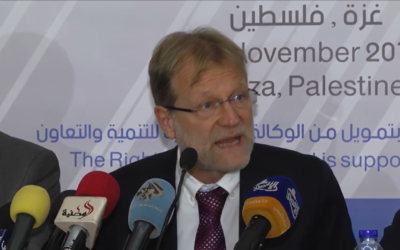 “If you move around in Gaza, there isn’t a wide utilization of masks, there are gatherings. It’s really a challenge to convince the public to adhere to those measures,” Rockenschaub observed, adding that the Hamas authorities were under considerable pressure not to enter a second lockdown.

According to the health ministry, four Gazans died of COVID-19 in the past 24 hours, while 54 have died of the virus since March.

Around 668 new infections were identified in the West Bank, according to the Ramallah-based Palestinian Authority health ministry. Nearly one-third of the new cases were in Nablus. Approximately 19% of tests taken came back positive, as well, a substantial increase from previous weeks.

Since the Palestinian Authority gradually relaxed restrictions on its second lockdown in late July, there has been little enforcement of social distancing or mask-wearing in most PA areas. While officials have called on Palestinian residents to follow safety procedures, non-compliance is widespread.

Despite that, PA health minister Mai al-Kaila told Palestine TV on Tuesday night that a return to “a general lockdown is not on the government’s agenda.”