Even as Israel races toward herd immunity, the Gaza Strip is seeing coronavirus infections reach record heights, with only enough vaccines for some two percent of the population.

“We began to enter this wave of coronavirus during March. Right now, we’re still seeing a rise in infections and in serious cases, and we expect that number to continue to rise,” said Rami al-Abadleh, one of the officials charged with overseeing the anti-coronavirus effort in the Hamas-run Gaza health ministry.

According to the Gaza health ministry, there were 15,475 active coronavirus cases present in the Gaza Strip as of Wednesday morning. A previous wave of infections, in December, peaked closer to 10,000 active cases.

Since the beginning of the pandemic, 75,375 Gazans were known to have been infected with the novel coronavirus, and 642 are reported to have died.

Around 35% of tests came back positive over the past week, indicating that the virus is likely spreading widely undetected among Gazans.

A health worker takes a sample to test for coronavirus at a health center in Rafah, in the southern Gaza Strip, on January 5, 2020 (Abed Rahim Khatib/Flash90)

But with infections continuing to spike, and with the month-long Ramadan holiday around the corner, officials have not ruled out a return to lockdown.

“We’re doing everything we can so as to enter Ramadan with an improved epidemiological situation,” Hamas interior ministry spokesperson Iyad al-Bozm said.

“And we haven’t yet reached the peak of this wave,” al-Abadleh said, adding that he expected that new infections would crest sometime in mid-April. 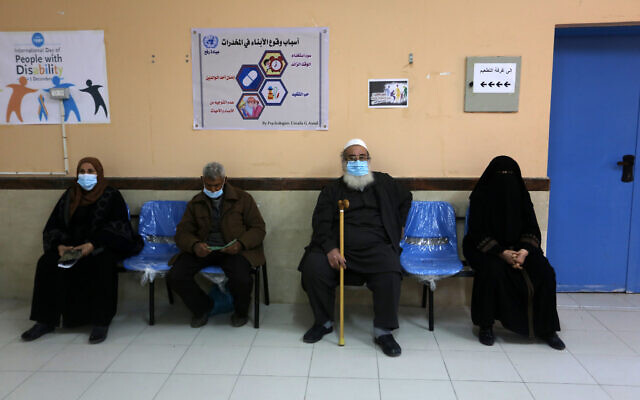 Locals wait for a COVID-19 vaccine at an UNRWA clinic in Rafah, in the southern Gaza Strip, on March 3, 2021. (Abed Rahim Khatib/Flash90)

With little testing being conducted in the densely populated coastal enclave, health officials estimate that the true number is likely to be more than five times as high as the reported figures.

Hamas officials have denied that high numbers of deaths are going unreported alongside the high number of cases.

“Gaza is small. Everyone who dies — both they and their families are known [to authorities]. No one could successfully cover up such a matter,” Hamas health official Munir al-Bursh told The Times of Israel last week.

A study conducted in early February by Hamas health authorities estimated that around 40% of Gazans had coronavirus antibodies, far higher than the number of recorded cases. If two-fifths of Gazans have already had coronavirus, that would mean the death rate in Gaza is extremely low — far less than 1%.

Some officials are optimistic, arguing that the high rate of apparently minor infections could lead to widespread herd immunity. Health officials in the coastal enclave attributed Gaza’s surprising immunity to its relatively young population — just 2.7% of Gazans are over the age of 65, compared to around 12% of Israelis. 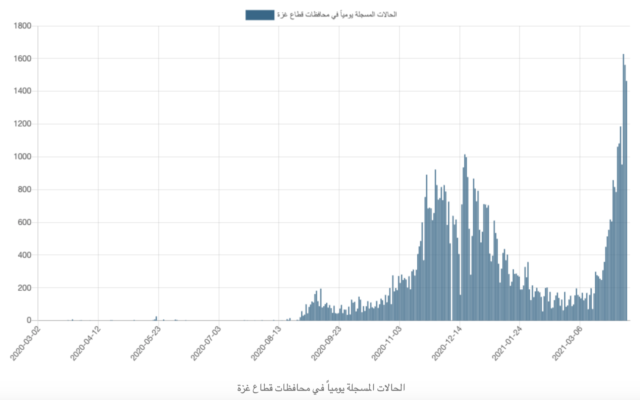 A graph showing daily cases in the Gaza Strip since the beginning of the pandemic (Screenshot: Ministry of Health)

Both the Hamas terror group and international observers have warned that the Gaza health system — worn down by years of an Israeli-Egyptian blockade and three wars between Israel and the enclave’s rulers — is ill-equipped to handle a severe spike in cases.

Israel has justified the blockade as necessary to contain arms smuggling by Hamas, which avowedly seeks Israel’s destruction. Human rights groups have lamented the toll the restrictions take on ordinary Gazans.

Gaza lacks sufficient hospital beds and medical equipment. Hamas authorities say they have little money with which to pay their medical staff, many of whom have received partial salaries for years. 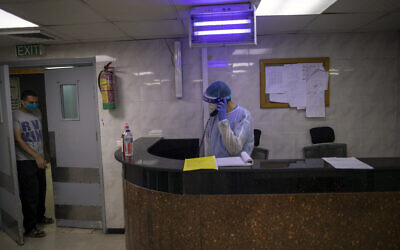 Palestinian doctors wear protective clothing as they work at the emergency room of the al-Quds Hospital in Gaza City, Sept. 7, 2020 (AP Photo/Khalil Hamra)

Oxygen used to treat critical coronavirus patients is also scarce. While three oxygen tanks arrived in the coastal enclave last week, they were not enough to cover the needs of patients in critical condition should cases continue to rise, according to Hamas health official Abd al-Latif al-Haj.

“We’re concerned — as far as oxygen goes — that should the cases rise above what’s been anticipated, lives could be lost,” said al-Haj, who directs the ministry’s coordination with international organizations.

Even testing for coronavirus in the coastal enclave is no simple matter. Gaza only has two laboratories equipped with the PCR machines used to examine coronavirus test kits.

According to al-Haj, there is also a lack of testing kits, leading health authorities to rely on far less reliable rapid field tests, which have a higher rate of false negatives.

“The negative [rapid] tests we do, we end up having to do a PCR test for them in any case, just in case we had a false negative,” he added. 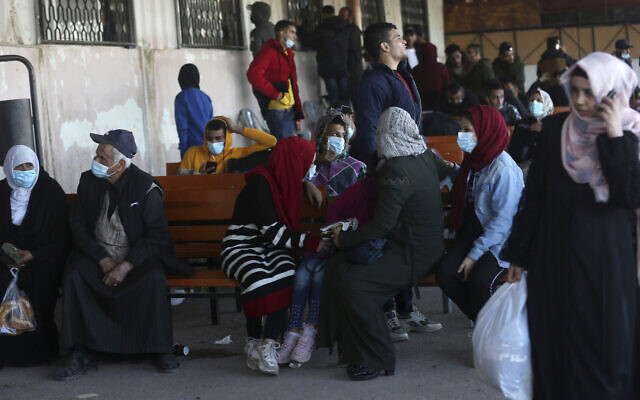 Illustrative: Passengers wait for their passports to be processed so they can cross the Rafah border to the Egyptian side, in Rafah, Gaza Strip, November 24, 2020. (AP Photo/Adel Hana)

Gaza also lacks a resource far harder to import: trained and capable medical staff, al-Haj said. With few opportunities at home, many physicians and nurses with the opportunity to work abroad have left.

“All of the medical students who head to study in Jordan, in Qatar — they don’t come back,” al-Haj said sadly.

But al-Abadleh — who said he expected to see as many as 70 to 80 percent of Gazans eventually get the virus — dismissed the possibility that the health system would collapse under the weight of serious infections.

“In the health ministry, we are preparing for every eventuality,” al-Abadleh said. “In the first wave, we did not have enough intensive-care beds for patients, so we used normal beds. We’ll make do.”

‘Check their temperature, wave them through’

For months after the pandemic began last March, Hamas authorities managed to prevent the virus from entering the coastal enclave through strict quarantine measures. All those arriving in Gaza stayed in mandatory Hamas-run quarantine centers for three weeks, taking multiple coronavirus tests.

Nonetheless, the virus found a way into the Strip. The first cases of community spread were recorded in late August, nearly six months into the pandemic. Infections spiked in mid-December, with nearly 45% of tests coming back positive.

A harsh lockdown by Hamas health authorities then succeeded in curbing the spread of the virus. Life in Gaza slowly began to return to normal, with schools, mosques and popular markets coming back to life in early February.

The lull in cases did not last, however. Over the two weeks, thousands of new infections were recorded in the Gaza Strip. 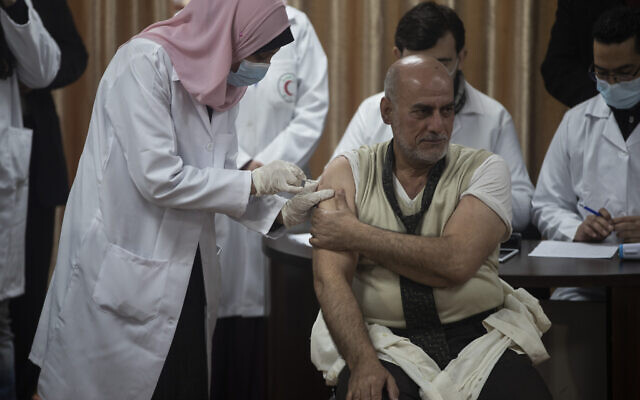 Another unexpected factor played a role. In February, the Rafah crossing between Egypt and Gaza opened indefinitely for the first time in years against the backdrop of Egyptian mediation between Palestinian factions in Cairo.

Many Gazans rejoiced at the opportunity to enjoy greater freedom of movement into and out of the blockaded enclave. But al-Tibi contended that the crossing, alongside the relaxation of coronavirus restrictions, led to a flood of infections passing from Egypt to Gaza.

“We erred in the West Bank and in the Gaza Strip — we loosened restrictions at the border crossings,” יק said. “In Gaza, they opened Rafah crossing in both directions. Thousands now cross from Egypt every day, they check their temperature and wave them through.

“Now, everyone who comes — they head straight home,” al-Tibi said. “I’m not suggesting quarantine, but at least take random serological samples to check for the virus.”

Gaza has been slow to start its anti-coronavirus vaccination campaign. So far, the enclave has received enough shots to fully immunize just over 2% of the total population.

Around 60,000 Russian Sputnik V doses sent by the United Arab Emirates have arrived in Gaza; another 2,000 were transferred by the Palestinian Authority in Ramallah. Gaza has also received 20,000 Pfizer and AstraZeneca doses through COVAX, an international vaccine program backed by the World Health Organization. 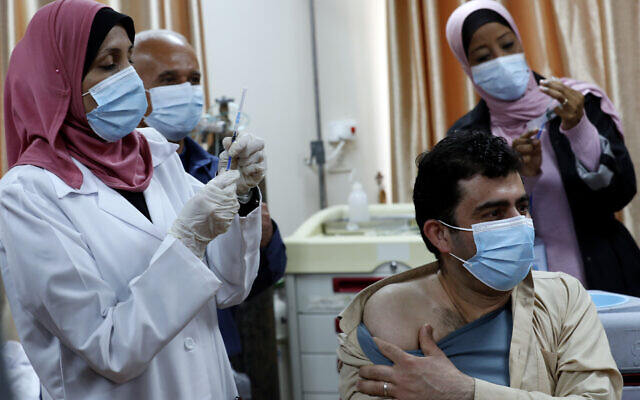 A nurse prepares a shot of the Pfizer coronavirus vaccine at a clinic in Gaza City, March 21, 2021. (Adel Hana/AP)

The Palestinian Authority also received around 100,000 doses of the Chinese Sinopharm vaccine in March as a donation from Beijing. But according to al-Haj, only around 10,000 of those shots were set to reach Gaza.

“This is a catastrophe, as we are 45% of the Palestinian population,” he said.

Al-Haj acknowledged that Gaza had previously outstripped the West Bank in vaccination rates due to the Emirati vaccine shipments. But he noted that Israel had also provided vaccines to some 105,000 West Bank Palestinians who work in Israel.

Some residents have also hesitated to take the shots that have already arrived in the Strip.

“We ought to see an enormous rush to get vaccinated. But although we have 82,000 doses in our hands, only around 25,000 have been used so far,” al-Bursh lamented.

Al-Tibi blamed misinformation on social media for the widespread skepticism: “Ten videos with me, Dr. Jawad, telling people to get vaccinated can’t beat one video frightening them off.

“The trust of citizens in their institutions and public activity is, in general, not very strong. And, truly, people are hesitant [to take the vaccine],” al-Tibi noted. 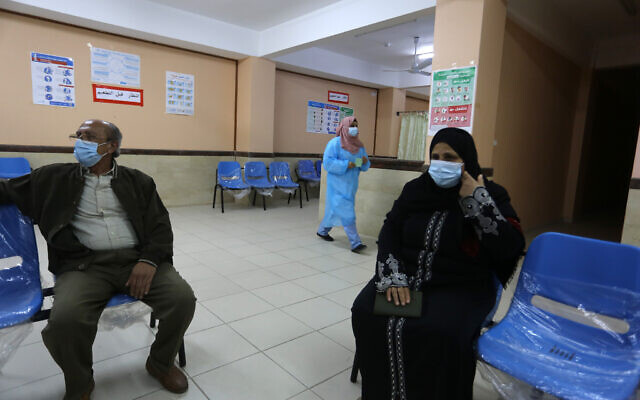 A medical worker of UNRWA gives shots of the Sputnik V COVID-19 vaccine at UNRWA’s clinic in Rafah, in the southern Gaza Strip, on March 3, 2021. (Abed Rahim Khatib/Flash90)

With surging cases and a population unlikely to reach herd immunity in the near future, Gaza has begun to inch back toward increased restrictions. But authorities there have yet to order a return to the total lockdown that put an end to the first wave of infections late last year.

“We’re trying to avoid lockdown. The option is always on the table, but we want to try to maintain some kind of middle ground as long as possible,” al-Abadleh said.

Since the Hamas takeover in 2007 and the ensuing blockade, Gaza has endured an unabating economic crisis. As of February 2021, the unemployment rate hovered around 43%, compared to 15% in the West Bank, according to official Palestinian Authority statistics.

Al-Tibi argued that the economic situation ruled out the lockdown option; tightened restrictions would contain the virus without the devastating impact of a massive closure, he said.

“There are people in the streets, selling a few strawberries so that they can make 10 to 15 shekels with which to feed their children. When you say ‘lockdown,’ there are families who simply will be crushed,” al-Tibi said.