Labour is haemorrhaging support among previously loyal Muslim voters ahead of a crucial by-election over claims that Sir Keir Starmer’s party is “Zionist” and “supporting Israel every way it can”.

A Jewish News investigation on Tuesday discovered that in one key area of the West Yorkshire constituency of Batley and Spen, the number one issue at stake for the vast majority of the electorate is that of Palestine.

Batley – the seat’s largest town, and once a Labour stronghold – is now awash with pro-Palestine posters, along with campaign material in support of the notorious anti-Israel activist George Galloway.

One ex-Labour local voter claimed: “I’m voting for George because of his stance over Palestine.

“Starmer has been bought out by the Zionist lobby. They are the ones who backed his campaign to take over from Corbyn.

“People aren’t stupid. You can read about it on the internet.”

Another Batley resident admitted on Tuesday they had concerns that Galloway “was exploiting it (Palestine) for his own personal gain.”

But the man added: “It is Muslim thing – we are all passionate about freeing Palestine.

“I wouldn’t say it is a hatred of Israel. We just want to free Palestine. There can be two states.”

Meanwhile, another male insisted: “Georgeis a good thing – he is supporting Palestine.

“Labour is not backing them, they support the Israelis in every way.”

A pro-Palestine poster up in Batley and Spen (Credit: Lee Harpin)

Asked why he felt Starmer had taken the party in this direction, the man added: “The money – backhanders.”

He continued: “The media is always trying blame Hamas, when it is definitely the Jews.”

The use of antisemitic tropes amongst the voters of Batley was occasional, rather than frequent this week.

Most insisted they had “no problem with the Jewish people” and said the only thing they had a dislike of were “Zionists.”

“We respect the Jewish people, they are, like us, from the Abrahamic faith,” said one man.

“I ran a garage and had lots of Jewish clients, people from Leeds and other places.

“They were my friends.” 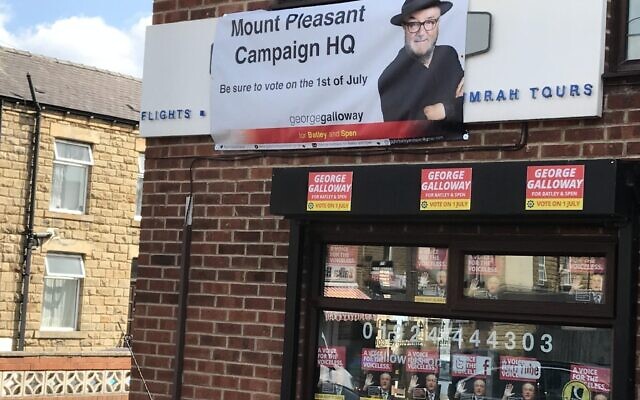 Another man condemns the “idiots from Bradford” who brought shame on the pro-Palestine movement with their car convoy through north London last month.

Meanwhile one female in Batley said: “Zionism is not Judaism. They are completely different.”

An opinion poll last weekend predicted that the former Big Brother contestant could gain around 6 per cent of votes cast in the Red Wall seat election, with almost all of Galloway’s support coming from ex-Labour voters.

But amongst the Palestine obsessed voters of Batley, Galloway has convinced many that he is in with a real chance of victory in next month’s poll.

Local voters in Batley told Jewish News that they believed where there had once been 90 per cent support for Labour amongst Muslims, this had fallen to below 50 per cent. 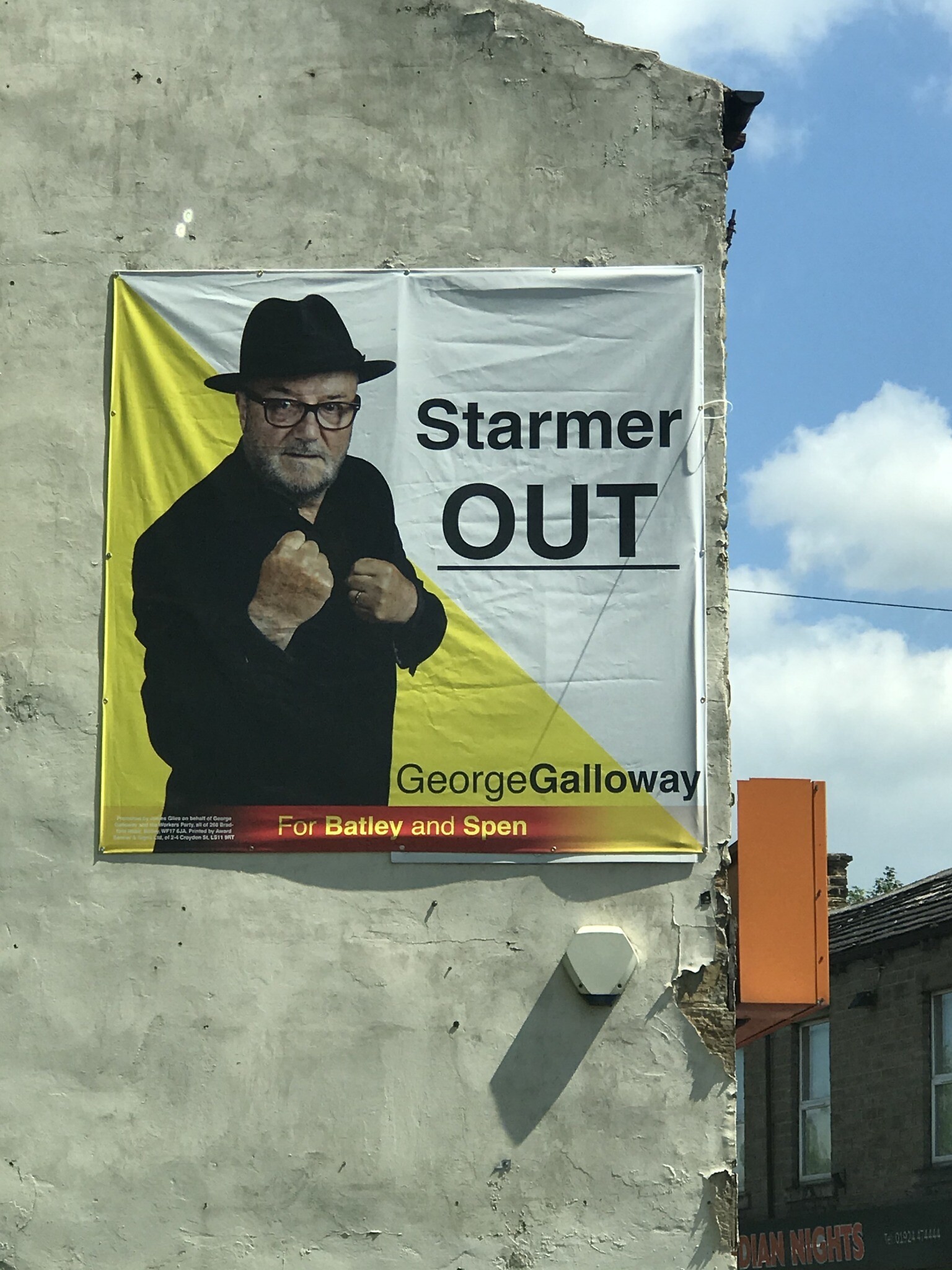 In reality, a vote for the newly formed Workers Party, of whom he is leader, is likely to hand victory to the Conservatives, who enjoy significant support in most of the Spen situated towns in the seat.

One local, who recognised the likely outcome of the election, said: “There is a joke amongst some Muslims that really George Galloway is a Tory secret agent.”

But as Jewish News spoke with voters in Batley is was clear that many felt Galloway was in with a clear chance of winning the seat next month – and that he was the only candidate to put the issue of Palestine at the top of his agenda.

And the advertising for Galloway’s campaign in Batley easily dwarfs that of his opponents.

The Tory and Labour campaign rely on tiny placards affixed onto lamp posts.

Huge banners in support of Galloway are everywhere.

One banner fixed onto the outside of a travel agents shop in support of Galloway’s campaign read: “I will demand an end to UK arms sales and military co-operation with Israel.”

Meanwhile another giant poster fixed to the side of a house, featured a photograph of Galloway, fists clenched, in a fighting position, with the wording; “Starmer OUT”.

An election leaflet distributed by the former Respect Party leader’s campaign team suggested it was a “two horse race” in Batley and Spen between Galloway and an “unknown Tory candidate.

Declaring himself “Pro-Palestinian always and without equivocation”, Galloway’s leaflet suggested his rival “supports Israel over Palestine.”

One local voter even suggests that Galloway, who was once labelled an “apologist “and a “mouthpiece” for Iraqi tyrant Saddam Hussain by the Labour MP Ben Bradshaw, has become a Muslim “revert” himself. 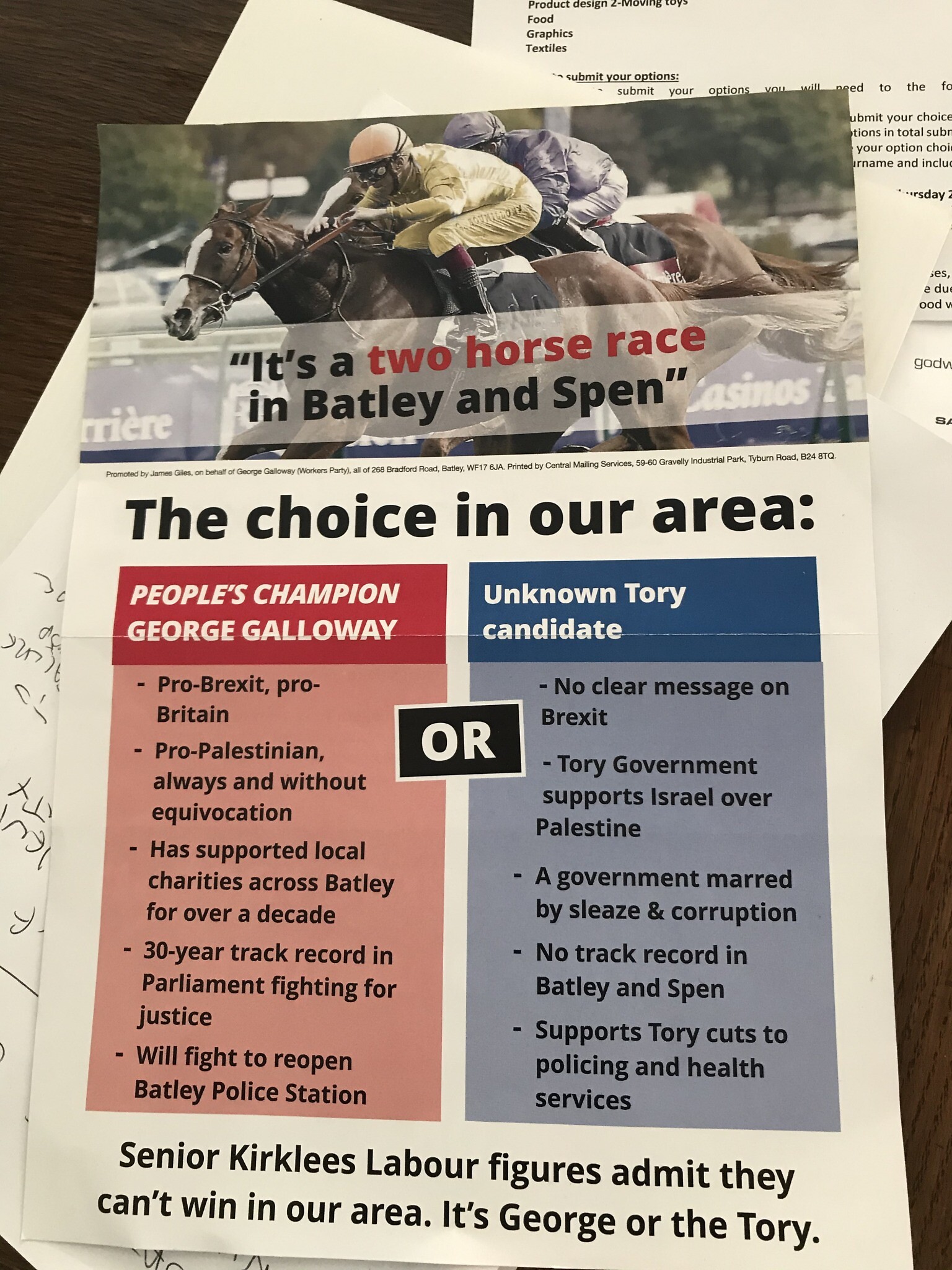 “I’ve heard he is,” says the male owner of a local newsagent. “I have not seen him in the mosque.

“If I would see him there, I would know for sure.”

A former Labour MP, Galloway famously used his anti-Zionist stance to land the Bradford West seat in 2012, only to be voted out as the Respect Party representative three years later to Naz Shah MP.

Outside one of the largest mosques in Batley, two men offer a scathing verdict of the current Labour leader.

They say that when Starmer arrived in Batley last month, where he posed from pre-election photographs with local candidate Kim Leadbeater at the local rugby club he failed to notify the local Muslim electorate.

The men suggest Starmer was scared of a possible backlash over his alleged position on Palestine. 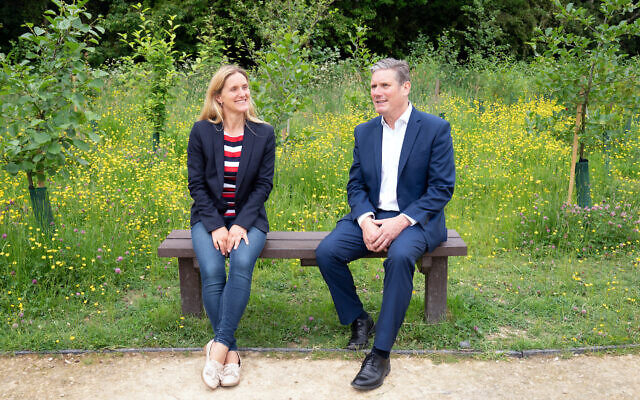 Labour Leader Keir Starmer and Labour candidate Kim Leadbeater during a visit to the Jo Cox Community Wood in Liversedge while on the campaign trail ahead of the Batley and Spen by-election.

More impressive, they suggest was Boris Johnson’s decision to visit Batley’s Foxes Biscuit factory, which stands only a few hundred metres away from their own mosque.

While they said they could not bring themselves to vote Tory, the Prime Minister also gained their further respect when he praised the success of the vaccine roll-out in Batley on the Six O Clock BBC News.

“He has said silly things about Muslim women in the past, but he is not stupid,” said one of the men.

“Boris has done two positive things for Batley in the recent weeks.”

Asked if the imams at the local mosque have been urging people to back Galloway on  1 July, both men issue a strong denial.

They stress that the leaders of the mosque have always refused to enter into offering political advice, warning the congregations only to avoid town when marches by organisations such as the far-right EDL take place.

Despite the overriding interest in one foreign policy issue, Batley’s citizens stress their affinity both to their local town and to the UK. 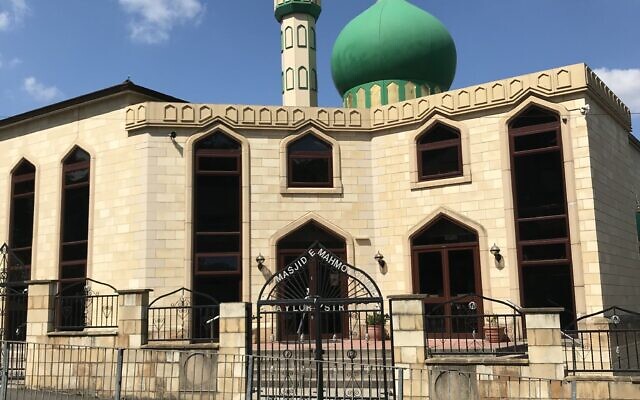 Friendly and approachable, the chatter amongst one group of men following afternoon prayers at the mosque is about that evening’s England Euro 2021 match.

Meanwhile, leaflet put out by the Labour candidate Kim Leadbeater earlier this month attracted criticism from some in the Jewish community, and from the former Labour MP Ian Austin, because it strongly emphasised her commitment to resolving the Palestinian issue, but failed to condemn Hamas. 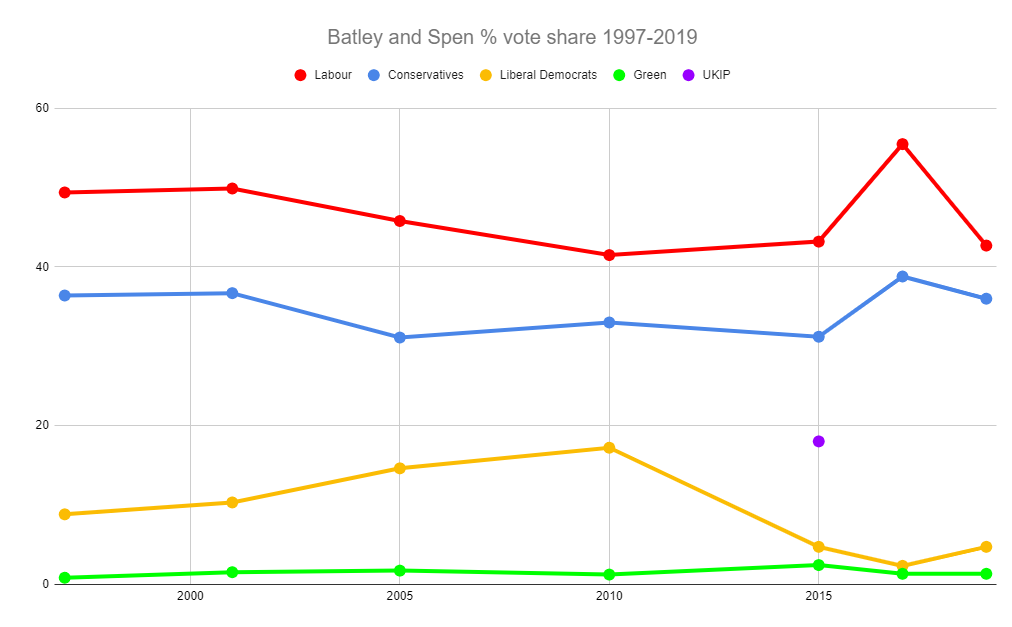 Batley and Spen vote share as a percentage 1997–2019 (note: the 2016 by-election is not shown as Labour were the only major party to stand)

But so important an issue is it to the locals in Batley town centre it would be hard to envisage a candidate attracting support at the polls with expressing some solidarity with the Palestinians.

And on the ground, the Labour candidate’s condemnation of “all violence” and support for a secure Israel has not done her any favours with the local Batley electorate.

Kim is also the sister of the late Jo Cox, the former Labour MP who was murdered by a far-right extremist in the town in 2016.

Reports have claimed local WhatsApp groups in Batley have circulated messages casting speculation about the sexuality of the Labour candidate.

It has also been claimed that some local activists have brought up the fact that Starmer’s wife has a Jewish family background.

Neither claim was openly discussed by locals in Batley during our investigation into their political beliefs. 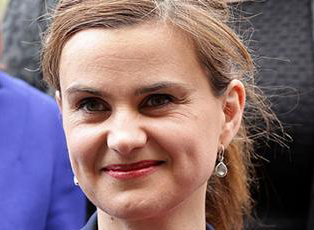 Leeds councillor Ryan Stephenson will contest the seat for the Conservatives after Labour’s Tracy Brabin vacated it to become Mayor of West Yorkshire last month.

The Tories last won Batley and Spen in 1983. At the last election Brabin won the seat from the Conservative challenger with a slim 3,500 majority.

Labour would have faced a fight to hold the seat even without the looming spectre of the Palestinian issue – but this appears to have made the chances of doing so slim indeed.

But some voters admitted that even a victory for Galloway would in reality do little to help the Palestinian cause.

“World leaders cannot stop Israel from bombing Gaza, ” said one man. “Why should we seriously believe that George can do anything about it?”

Another insisted: “We can pretend all we like that Palestine is the main issue in our lives.

“But in reality it’s jobs, food for our families, and yes, potholes in the road.”