NEW YORK — When Georgia’s Secretary of State Brad Raffensperger saw he was getting a phone call from South Carolina Senator Lindsey Graham on Sunday, he figured it was to discuss the two Senate run-offs in his state that are slated to determine whether their Republican party will hold onto its majority in the upper Congressional house.

So he was surprised to learn that Graham was instead calling to inquire into the state’s ballot counting process that Raffensperger was overseeing for the US presidential election, where an initial count had US President-elect Joe Biden ahead of President Donald Trump by just 14,000 votes.

Raffensperger told the Washington Post the next day that Graham asked him whether he had the power to reject certain absentee ballots — a question the secretary of state interpreted as an illegal suggestion to toss out legitimate votes.

In a follow-up interview with The Times of Israel on Wednesday, Raffensperger said that when he understood what Graham was implying, all he wanted to do was get off the call as quickly as possible.

“I told him I’d talk to our attorney, and I’d call him back, but I never did,” he said. “I thought he was calling about the senatorial races since he’s a senator, but obviously he was dipping his toes into the presidential race.”

When asked about the conversation with Raffensperger, Graham said Monday that he was “trying to find out how the signature stuff worked.” He said Raffensperger “did a good job of explaining to me how they verify signatures.”

Asked about Raffensperger’s interpretation that he was suggesting that legally cast ballots should be thrown out, Graham said, “That’s ridiculous.”

The staunchly Republican secretary of state has found himself at odds with Trump and many senior members of his party for standing by the manner in which the election and ballot-counting process was carried out in his state. Trump and other Republicans have repeatedly made claims of rampant voter fraud in Georgia and other states, but Raffensperger has insisted the accusations are false.

Raffensperger took pride in efforts he had advanced to ensure a free and fair election in Georgia, including instituting a brand new voting system “with a verifiable paper trail,” measures to prevent ballot harvesting and voter ID laws. 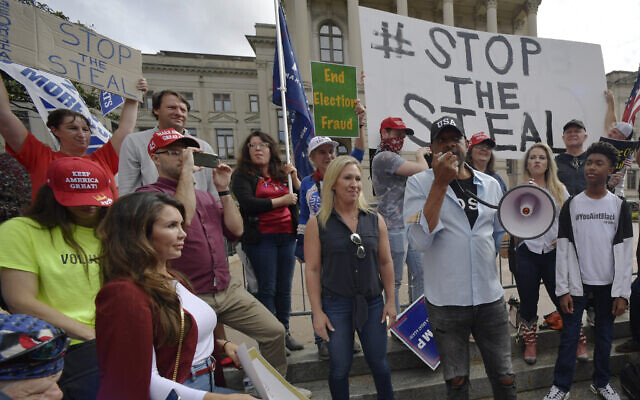 He said the audit process that was wrapping up Wednesday evening did uncover votes that were not initially counted for Trump, but the amount was nowhere near the 14,000 necessary for Trump to overtake Biden in the state. (Biden still has enough electoral college votes to have won the election regardless)

The audit process uncovered roughly 1,000 ballots for Trump that had gone uncounted, but most of these were due to election officials in Republican counties who accidentally failed to “upload the memory stick” with the results from several polling sites. However, those numbers have since been updated and Trump remains behind Biden.

Raffensperger said Trump was within his right to ask for a recount as the results will likely show a differential of less than .5% between Trump and Biden. The president’s campaign is indeed expected to file such a request.

Nonetheless, the Republican secretary of state avoided referring to Biden as the “president-elect” and said it was important to wait until all results are certified and “allow the electoral college to do their work.” 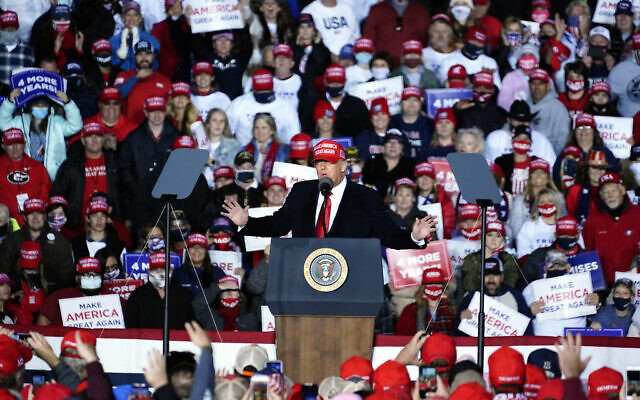 US President Donald Trump speaks at a campaign rally on November 1, 2020, at Richard B. Russell Airport in Rome, Georgia. (AP Photo/Brynn Anderson)

In addition to Graham and the Trump campaign, which has repeatedly taken to social media to criticize Raffensperger and the way the state’s hand tally is being conducted, both of Georgia’s Republican Senators participating in the January 5 run-off elections have called on the secretary of state to resign.

Raffensperger said he also received a letter from Republican Congress members in Georgia who urged him to look into reports of voter fraud. The letter seen by The Times of Israel addresses Raffensperger as “George Secretary of State.”

“They’ve just been responding to pressure they’ve been getting from President Trump I would gather,” he said.

Raffensperger dismissed criticism of his Republican credentials, calling himself “a tax-payer champion and a pro-life conservative,” who has never voted for a Democrat. 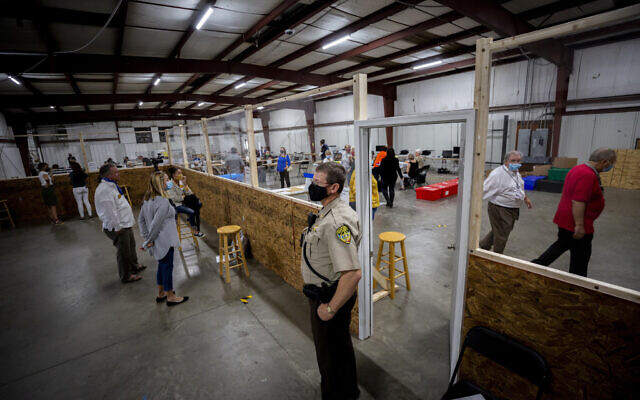 A Chatham County Sheriff’s Office deputy stands guard at the entrance between the public viewing area, left, and the main floor where election officials sort ballots during a ballot audit on November 13, 2020, in Savannah, Georgia. (AP/Stephen B. Morton)

He also made a point of clarifying that he had badly wanted Trump to win re-election and particularly appreciated his decision to move the US embassy in Israel to Jerusalem.

“He’s accomplished many great things in his four years, and if at the end of the day after all these challenges go through he’s not [the winner], he’ll have much to look back on with pride,” Raffensperger added.