LEPIZIG, Germany (AFP) — The German army installed its first rabbi as a religious counselor in 100 years on Monday, in a symbol of the renewal of Jewish life decades after the Holocaust.

Priests and pastors are already providing religious services to the estimated 94,000 Christians in the military.

But the equivalent has not been available to Jewish soldiers, who number around 300.

Hungarian-born Zsolt Balla, 42, took up the post underlining what he described as a “historic responsibility” to serve Jewish soldiers.

The father of three told public broadcaster Bayerischer Rundfunk that he wanted make them feel “just as integral” to the armed forces as their counterparts in countries such as the United States, Britain, and France.

Balla said this included working to root out antisemitism and other forms of hatred from the ranks of the armed forces “with good work, conversations, and exchange.”

He said he would continue to serve his congregation in Leipzig, on the board of the Orthodox rabbis conference, and as state rabbi of Saxony, alongside his military responsibilities.

Defense Minister Annegret Kramp-Karrenbauer announced the plans in December 2019, saying that she wanted to send “an important message to our Jewish soldiers” and stress that “Jewish life is self-evident in our country.”

Religious counselors in the army offer advice on ethical issues and accompany soldiers as they carry out training or further education.

More military rabbis are slated to join Balla in the future, and plans are afoot to put in place a religious counselor for the 3,000 Muslim soldiers.

However, talks have been held up because there is no central coordinating institution representing the community. 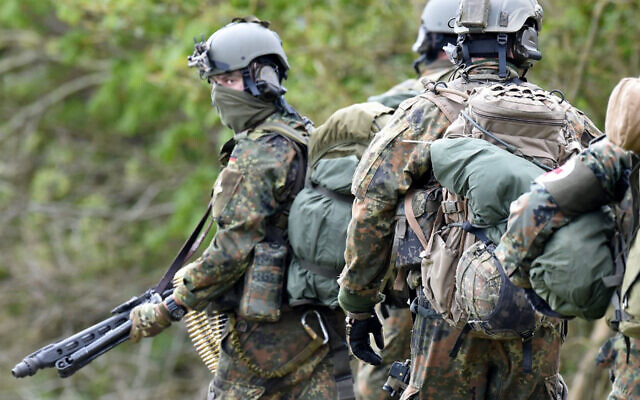 Germany’s armed forces have over the years repeatedly come under fire over suspicions that some members have far-right sympathies.

In 2018, then-defense minister Ursula von der Leyen ordered the military to purge all links to the wartime Wehrmacht, after learning that steel helmets and memorabilia of the Nazi-era army were openly displayed at one of its barracks.

Most recently, Kramp-Karrenbauer vowed to take decisive action against cases of radicalism in the security forces after a string of scandals over far-right networks in the police and military.