BAD NEUENAHR-AHRWEILER, Germany (AFP) — In the normally scenic German spa town of Bad Neuenahr-Ahrweiler, stricken residents were scraping muddy water from streets piled high with debris on Saturday as they began to face the aftermath of the worst flooding in decades.

“I haven’t slept for two days,” said Michael Kossytorz, 40, standing by a pile of rubble outside his apartment.

“For my parents it’s even worse because they lived closer to the river. But we have to keep going,” he said.

Bad Neuenahr-Ahrweiler in the volcanic Eifel region is among the areas hardest hit by severe storms that have killed at least 140 people in western Germany since late Wednesday.

Torrents of water were sent rushing down the streets, sweeping away cars, sheds, trees and more.

The pavements were littered with broken furniture, while residents wandered the streets in rubber boots and mud-stained clothes, determined to make a start on the enormous clean-up job.

A damaged car is seen beside debris in Bad Neuenahr-Ahrweiler, western Germany, on July 17, 2021. (Photo by CHRISTOF STACHE / AFP)

From a fast food restaurant with nothing left but bottles of alcohol behind the bar to a car dealership reduced to a muddy carpet, the town destroyed so quickly will take months or even years to repair.

As well as the electricity, which will be cut off for several more days, and the almost non-existent telephone network — complicating the search for those still missing — the gas pipes have been destroyed and will not be repaired before Christmas.

“The day after the flood we started to clean up, but it didn’t work because at first the water level was still very high and we were still in shock,” said Gregor Degen, a baker who has lived in the town all his life. 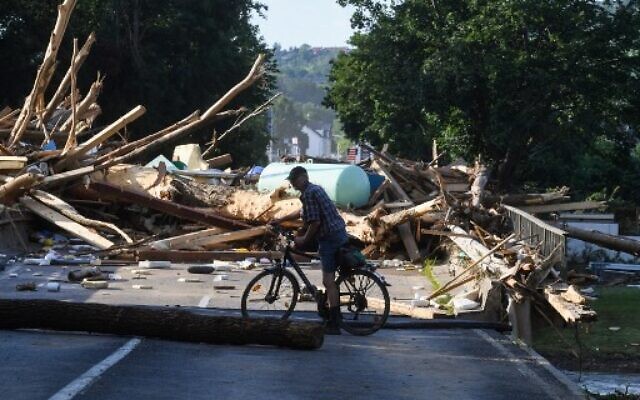 A man on a bicycle is seen on a destroyed bridge in Bad Neuenahr-Ahrweiler, western Germany, on July 17, 2021. – (Photo by Christof STACHE / AFP)

But then “I gathered the people from my apartment block, we got together, coordinated and it worked very well. I am extremely grateful to everyone for the help,” he said.

“Every death affects me personally because I can imagine, when people are found in their cellars… I can’t help but sympathize.”

For the town of 30,000 people, famed for its thermal baths and wellness tourism, the flood impact is likely to leave deep financial scars.

“The whole town is threatened if we don’t get help,” said Ellen Aust, 58, the manager of a spa hotel along the banks of the river Ahr.

“We had only just reopened after months of closure because of corona,” Aust said, sitting at a table outside the hotel with a colleague.

“We normally have a lot of regular guests at the hotel, including from abroad. We need help to keep going, the whole season is ruined.”