BERLIN — Germany is moving to rid itself of a cluster of laws introduced by the Nazis, still lingering on its books 75 years after World War II.

There are 29 German legal or regulatory texts that still use wording introduced when Hitler was in power, according to Felix Klein, the government’s point man for fighting anti-Semitism.

Some of them have “a very clear anti-Semitic background,” Klein told AFP.

Now, with the support of several parties in the Bundestag lower house of parliament as well as Interior Minister Horst Seehofer, Klein wants to wipe the slate clean — preferably before the end of the current term in September.

But the question remains whether to introduce a single law to reform all the texts at once, or to approach them one by one.

Germany has already reformed several Nazi-era laws over the years, including the infamous Paragraph 175 that criminalized sex between men and was repealed in 1994.

More recently, a 1933 ban on medical practitioners “advertising” that they carry out pregnancy terminations was partially scrapped in 2019.

But some pertinent examples remain, including a law on altering names introduced by Nazi interior minister Wilhelm Frick in 1938. 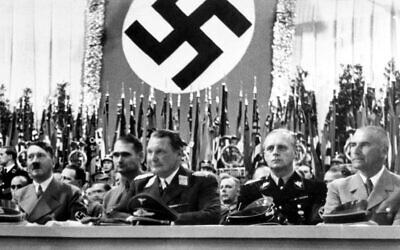 From January 1939, a change to the law forced Jewish people to add the names “Sara” or “Israel” to their first names if they did not have a name that was considered typically Jewish.

The law “played a huge role in the exclusion and disenfranchisement of Jews,” said Thorsten Frei, deputy leader of the conservative CDU party’s parliamentary group.

The section on Jewish names was scrapped by the Allies immediately after World War II, but the remaining text from 1938 was incorporated into federal law in 1954.

The remaining parts of the law, which deal with issues such as the right to change one’s name, are still “written as though the Third Reich still existed,” Klein points out.

Terms such as “German Reich,” “Reich government” and “Reich interior minister” are used, he said.

“It is absolutely unacceptable that Nazi language should continue to shape our federal law in 2021,” Social Democratic Party politician Helge Lindh told AFP.

“It is high time to send a clear signal with this long overdue form of denazification.” 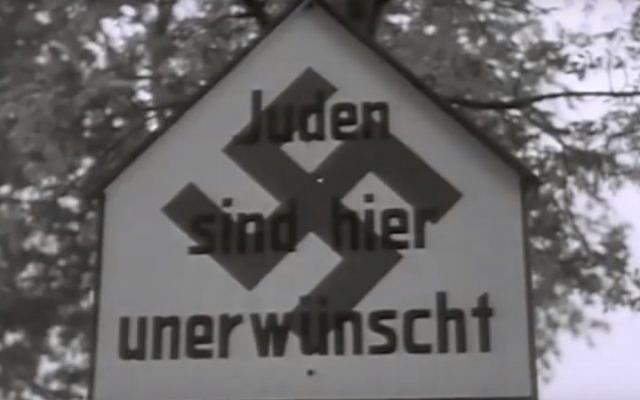 A sign reading “Jews are not wanted here,” erected somewhere in Germany following the introduction by the Nazis of the Nuremberg race laws in 1935. (Youtube screenshot)

The law should also be cleaned up so it applies to all foreign nationals living in Germany, not just Germans, Lindh urged.

The law on names may be the most prominent, but there are at least 28 other German legal texts dating from the Nazi era — and possibly as many as 40, he added.

“Other laws and regulations deal with very technical issues, such as the upkeep of the river Elbe in the Hamburg region,” explains Frei.

Although it was adopted four years after World War II ended on May 8, 1945, aspects of Germany’s Basic Law, which charted a clear course away from Nazi ideology, have also come under fire — particularly from the political left.

Critics are calling for a revision of Article 3 of the constitution, which contains the term “race.” In June 2020, Chancellor Angela Merkel declared herself open to the idea. 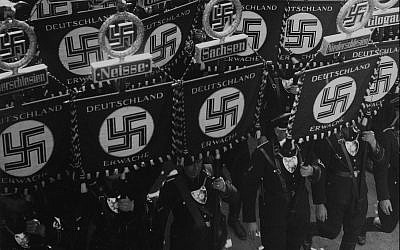 SS members carry flags with a swastika and names of German states and towns as they march towards the town hall of Nuremberg, Germany, September 10, 1935, to open the convention of the National Socialist German Workers’ Party. (AP Photo)

But any changes to the Basic Law require a two-thirds majority in parliament.

Germany is also planning to scrap alphabet tables — phonetic aids with phrases like “F for Friedrich” — that have remained largely unchanged since the Nazis removed all names with Jewish associations in 1934.

Although the tables were revised in 1950, most of the old names were not reinstated.

The tables are not laid down in law, but overseen by the German Institute for Standardisation (DIN).