The German government has agreed to ban the Hamas flag following a rise in the number of antisemitic incidents surrounding the recent conflict between Israel and Gaza terror groups, a report said Sunday.

According to the Deutsche Welle news agency, citing the Welt am Sonntag newspaper, the decision was made in response to a number of incidents at anti-Israel protests last month.

Hamas is one of several Palestinian groups listed by the European Union as terrorist entities.

“We do not want the flags of terrorist organizations to be waved on German soil,” Thorsten Frei, the deputy parliamentary spokesman for the CDU, reportedly said, adding that the ban was a “clear signal to our Jewish citizens.”

The center-left Social Democratic Party, a coalition partner to Merkel’s party, had initially raised constitutional concerns about the potential ban on the flag, but later gave its backing to the proposal.

Some participants at marches in towns across Germany shouted antisemitic slogans, which Merkel blasted as “unacceptable.”

Others burned Israeli flags and in one case stoned the entrance to a synagogue.

Germany’s Central Council of Jews, which represents about 200,000 Jews living in the country, called for stepped-up protection for Jewish institutions in the country. Data released last month showed antisemitic crimes rose by more than 15 percent in Germany in 2020. 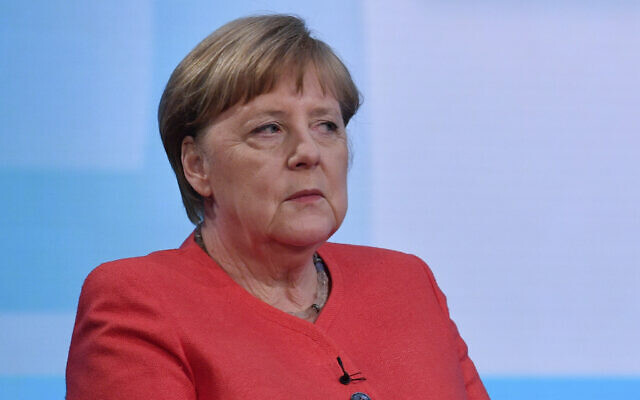 German Chancellor Angela Merkel ahead of a televised interview at the hauptstadtstudio (Capital city studio) of public broadcaster ARD in Berlin, June 4, 2020. (John MacDougall/Pool via AP)

A ban on Hamas flags would not be the first action of its kind by Germany.

Last year, Berlin officially announced that it had outlawed activities by the Iranian-backed Lebanese terrorist organization Hezbollah. Since there is no formal German branch of Hezbollah, Berlin could not outlaw the organization as such,  so instead undertook to ban the terror group’s activities.

The policy prohibits the showing of Hezbollah signs and symbols in public, including “in an assembly or in print, audio or visual media, pictures or portrayals.”