A 10-year-old girl was killed near Kfar Adumim, a West Bank settlement east of Jerusalem, after a dune buggy in which she was riding overturned, Hebrew media reported Sunday.

The girl’s father suffered moderate injuries and her 6-year-old brother was lightly hurt. They were taken to Jerusalem’s Hadassah Medical Center for treatment.

Media reports identified the girl as Roni Kapach, from the settlement of Alon.

The accident took place during a family outing at Desert Camping Israel, an ecological campsite in Kfar Adumim.

Magen David Adom medics dispatched to the scene told Channel 12 News that the young girl was discovered “without signs of life.”

View of the West Bank settlement of Kfar Adumim in the Judean Desert, March 5, 2019. (Amanda Borschel-Dan/Times of Israel)

“The two others who were moderately and mildly injured were found conscious. With the help of an off-road vehicle, we transferred them to an ambulance and they were evacuated to the hospital where their condition was declared stable,” they added.

The three were found lying on the side of a mountain next to the dune buggy, the paramedics said.

Separately, earlier on Sunday, a 25-year-old woman was killed in Jerusalem in a pileup of seven vehicles, including a minibus.

The collision took place on Hebron Road in the south of the city. An initial investigation into the incident suggested the minibus crossed the intersection on a red light, leading to the crash, according to Channel 12.

The 25-year-old was originally trapped underneath one of the vehicles. After rescue forces managed to extract her, she was pronounced dead at the scene.

“This is a very serious car accident with pedestrian involvement and several vehicles. A pedestrian hit by a commercial vehicle was trapped underneath it, unconscious, with no pulse and no breath, with a very serious multisystem injury. During the complex rescue operation, we performed medical tests, but she had no signs of life and we had no choice but to pronounce her dead,” Magen David Adom medics Meir Pollak and Roi Schechter told Channel 12. 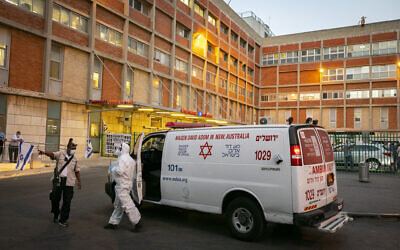 “Nine passengers in the vehicles involved in the accident were moderately and mildly injured, we provided them with medical treatment and evacuated five of them to the city’s hospitals for further treatment,” the medics said.

Seventy-four people have been killed in road accidents since the beginning of 2021, Channel 12 reported.