Officials from around the world sent their condolences to Israel on Friday morning, following the stampede at Mount Meron that killed at least 44 people and injured over 150 others.

In a tweet, US National Security Adviser Jake Sullivan said: “Our hearts go out to the people of Israel tonight following the terrible tragedy at Mount Meron.” He sent condolences to the families of the victims and well-wishes to those injured.

EU Ambassador to Israel Emanuele Giaufret said he extended his “heartfelt condolences” to the families of the victims in the Meron tragedy.

Chargé d’Affairs at the US Embassy in Jerusalem, Jonathan Shrier, said he is “praying for the healing of those injured and send my sincerest condolences to those who lost loved ones,” following the “tragic news overnight from Mount Meron.”

“May their memory be a blessing,” Shrier added, using a traditional Jewish phrase.

Broken glasses are seen at the site of a stampede during Lag B’Omer festivities at Mt. Meron in northern Israel, April 30, 2021 (AP Photo/Sebastian Scheiner)

Germany’s Foreign Minister Heiko Maas sent his condolences to the families of the Mount Meron stampede victims, lamenting the “devastating” tragedy. Susanne Wasum-Rainer, Germany’s ambassador to Israel, said she was “heartbroken about reports of multiple casualties and suffering.”

India’s External Affairs Minister Subrahmanyam Jaishankar tweeted that he was “deeply saddened at the tragedy.” 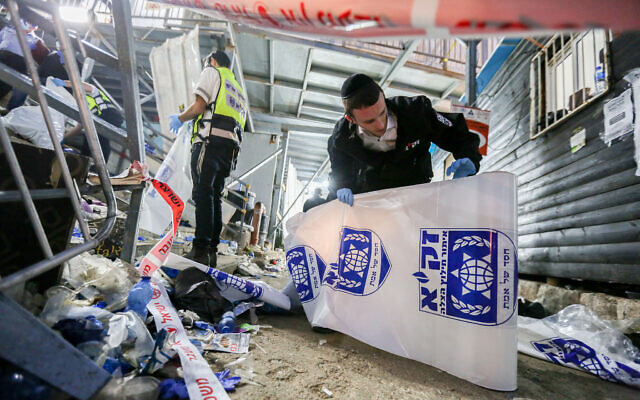 Israeli rescue forces after a stampede during the celebrations of the Jewish holiday of Lag B’Omer on Mt. Meron, in northern Israel on April 30, 2021 (David Cohen/Flash90)

Austria’s Foreign Ministry tweeted that the the nation was “shocked and deeply saddened by the tragic events at Mount Meron.”

“Our hearts go out to the people of #Israel and the families and loved ones of the victims. We wish a swift recovery to all those injured,” the tweet read.

Ukraine’s Foreign Minister Dmytro Kuleba tweeted that his country “stands by Israel at this dark hour.”

The Conference of Presidents of Major American Jewish Organizations said it was “horrified” by the events and extended its condolences to the families of the dead while praying for the recovery of the injured.

Meanwhile, the Board of Deputies of British Jews said it’s “devastated” by the deadly stampede in Meron.

“We are devastated at the news that a celebration for the festival of Lag B’Omer has led to such a tragic loss of life. Lag B’Omer traditionally celebrates the cessation of death of religious students from a terrible plague in Roman times. It is a bitter irony that the day will now become partly known as a day of mourning for the families affected,” the umbrella body’s president, Marie van der Zyl, said in a statement.