Government ministers on Monday approved an aid plan to assist communities affected by a major wildfire that tore through the Jerusalem Hills earlier this month, earmarking funds to restore the area.

The huge fire burned through some 25,000 dunams (6,200 acres) of forest outside Jerusalem on August 15-17. Over 2,000 people were evacuated from their homes. Several houses were destroyed, though communities were largely spared.

The plan approved Monday includes NIS 2.6 million ($810,000) in immediate assistance for the local authorities, to restore infrastructure to its former state and cover other expenses as a result of evacuating residents from the blaze.

Another NIS 5 million ($1.55 million) was allocated to the local authorities for the cleanup of asbestos from structures that went up in flames.

“The government recognizes this as having significant environmental implications,” a statement from the ministers read.

The Labor, Social Affairs and Social Services Ministry allocated NIS 400,000 ($125,000) for welfare programs in the locales affected by the fire.

View of the damage caused to Metzuda Winery following a major fire which broke out in Moshav Giv’at Ye’arim, outside Jerusalem, August 17, 2021. (Yonatan Sindel/Flash90)

It scorched vast green forest areas that include beloved hiking paths and national parks, including the Sataf site and Har Hatayasim, causing widescale deaths of wildlife.

The Environmental Protection Ministry will draw up an NIS 60 million ($18 million) plan for the ecological restoration of areas damaged in the blaze. The plan, in cooperation with the Nature and Parks Authority, the Jewish National Fund, the Agriculture and Rural Development Ministry, local authorities, and other bodies, will be formulated within 60 days. 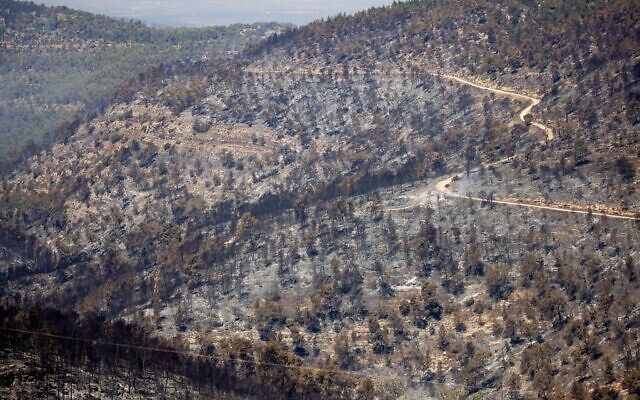 View of burnt trees following a major fire which broke out in the Jerusalem mountains, August 17, 2021. (Yonatan Sindel/Flash90)

Officials have predicted that the rehabilitation process could take decades.