An annual national monitoring study conducted in the Gulf of Eilat in southern Israel last year found rising surface sea temperatures, concentrations of trash on the seabed that are 1,000 times greater than those in the Mediterranean Sea, and considerable damage to corals caused by a massive storm in March 2020.

A trend of rising deep water temperatures has continued, according to the scientists who conducted the survey, released Sunday, from Eilat’s Interuniversity Institute for Marine Sciences. Surface temperatures are warming at an annual average of 0.036 degrees Celsius — three times higher than the global temperature average identified by the United Nations Intergovernmental Panel on Climate Change (IPCC).

The maximum temperature measured above the reefs in 2020 was the highest since monitoring began in 2004, the report said, reaching 29.1 degrees Celsius (84°F) at the Coral Beach Nature Reserve. This beat a record of 28.4 degrees (83°F) recorded in 2012.

“The annual average sea surface temperature measured this year was among the highest recorded in the past 30 years,” the report continued. “A short and very steep peak was recorded in June and then, during most of the summer, surface sea temperature was higher than the multi-year average….”

A storm that hit the coast of Eilat on March 13, 2020, was the strongest on record and perhaps in memory as well, the report went on, damaging up to 22% of coral cover in certain areas, especially in shallow waters.

Strong winds blew for more than a day with top speeds of 29.5 meters per second (~ 57 knots) recorded at the Interuniversity Institute. These, combined with high waves that ripped out coastal infrastructure and hurled it into the sea, resulted in the worst damage of the past few decades, the report said.

But, it added, “Overall, it seems that the damage is less dramatic than first perceived and it is likely that the reefs of Eilat will manage to recover naturally. At most sites, coral cover is still significantly higher than it was in the initial years of the monitoring program.”

Measuring corals for the 2020 national monitoring study of the Gulf of Eilat. (Inbal Ayalon, Interuniversity Institute for Marine Sciences, Eilat)

The coral reefs in the Gulf of Eilat and Aqaba in Jordan are the northernmost in the world and have displayed high resilience to global warming. Scientists hope that material from these corals will be able to help restore reefs in other parts of the world which are being decimated by warming seas.

The Bay of Eilat is poor in natural nutrients. Once every few winters, a layer of deep sea water, in which nutrients are concentrated, mixes with the upper layer, which then sinks down to the bottom. The nutrients that rise mix in with the currents sweeping out of the bay in a process that flushes out excess nutrients.

Because of sea warming, though, this process has not been seen since 2012 with the result that nitrogen, in particular, which is found in agricultural chemicals and more, is leaching into the bay and staying there. The report said this could not only turn the water cloudy but upset the delicate ecological balance needed for the corals and sea life to survive.

For the first time, the monitoring identified deformities in the calcium shells of tiny, single-celled marine creatures called forams located close to a drainage channel.

“We do not know the cause of the morphological deformation of these individuals but they may indicate some kind of contamination,” the report suggested. 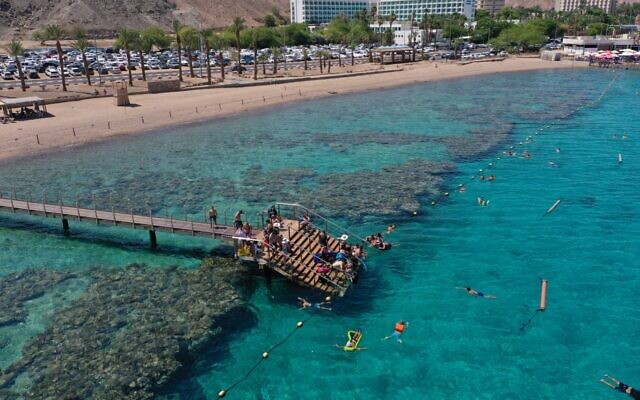 In addition, a trend of declining sea urchins noted since 2016 is continuing. Sea urchins are the most important group of reef grazers, feeding on algae and helping to maintain a balance between algae and corals.

The report cited the results of a separate survey of waste on the sea bottom carried out for the first time in Eilat last year by Israel Oceanographic and Limnological Research institution in Haifa, northern Israel. This found 350,000 items of solid waste per kilometer in the Gulf of Eilat, 1,000 times more than at a similar depth in the Mediterranean Sea off Israel’s coast.

Plastic bottles and other trash on the seabed off the coast of Eilat, southern Israel. (Omri Omessi, Israel Nature and Parks Authority)

Trash found on and between the corals varied from plastic drinks and sunscreen bottles and single-use plastic cutlery, to bits of iron and even sunbeds swept into the sea during the March 2020 storm.

“According to various estimates, some eight million tons of plastic are dumped into the[world’s] seas and oceans each year,” the report said. “In Israel, it has been found that up to 90 percent of marine waste is plastic that is almost indestructible. At this rate, by 2050, seawater will be richer in pieces of plastic than in live fish.”

The Eilat Municipality was the first to enact a municipal bylaw prohibiting disposable utensils on the beach.

The monitoring was funded by the Environmental Protection Ministry.