The government on Monday was expected to approve a compensation plan for the families of immigrants to Israel during the state’s formative years, who say their children and siblings were taken from them by the authorities when they arrived in the country in the 1950s and then disappeared.

Known as the Yemenite children affair, the issue involves over 1,000 families — mostly immigrants from Yemen, but also dozens from the Balkans, North Africa, and other Middle Eastern countries — who have alleged their children were kidnapped from Israeli hospitals and put up for adoption, sometimes abroad.

The official explanation is that the children died while under medical care, but many families do not believe this.

Though the state will express regret and understanding of the suffering caused to the families, there will be no official apology for what remains one of the most controversial and sensitive issues in Israeli society.

The absence of an official apology drew criticism from those who have assisted the affected families as they’ve sought answers to what happened to their children, as well as criticism because the terms of the plan exclude many of those who were part of the saga. Families claim the children were taken away from their parents by authorities, who never told them of their fate. They argue that the incidents were not an assortment of unconnected cases but rather reflected policy at the time.

In total, the government will allocate NIS 162 million ($46,600,000) for the compensation plan, which was first reported by Channel 12 News on Sunday.

Only families whose cases were already reviewed by one of the three state committees set up over the years to investigate the issue will be eligible to apply for compensation. Requests must be filed between June 1, 2021, and November 30, 2021.

A committee will be established to oversee distribution of the compensation money.

There are 1,050 families that qualify for compensation, according to the Ynet website. Receiving compensation will be dependent on a written commitment to not file any further lawsuits on the matter as well as to close and waive any existing legal action.

A Yemenite Jewish family travels to a refugee camp set up by the Joint Distribution Committee near Aden. (GPO/Public domain)

The proposal includes a declaration that “the government of Israel regrets the events that happened in the early days of the state and recognizes the suffering of families whose children were part of this painful issue.”

“It is not in the power of a financial plan to provide a remedy to the suffering caused to families,” the declaration notes. “However, the State of Israel hopes that it will be able to assist in the process of rehabilitation and healing of the social wound that this affair has created in Israeli society.”

The compensation plan came against the background of several lawsuits by families regarding the matter.

Earlier this year the state declared the cases invalid under the statute of limitations, though Supreme Court has yet to rule on the matter.

The nonprofit Amram Association, one of the leading organizations helping the families, said in a statement that the plan “is a sought-for step toward the families; however, it is only partial and does not provide a proper and comprehensive response to the case.”

The decision “is missing the most significant component in the process of taking responsibility — an official apology from the state,” Amram said.

“It should be noted that the current decision was made without dialogue with the families and associations active on the issue, and without this component, a process of correction and healing is not possible.”

The group also criticized what it said were “substantial failures such as arbitrary and exclusionary separation between families who have applied to committees, and are entitled to apply for compensation, and families who have not done so.”

It called on the government to find a more comprehensive solution, saying “many of the families did not approach the committees out of distrust of the establishment,” or for other reasons. 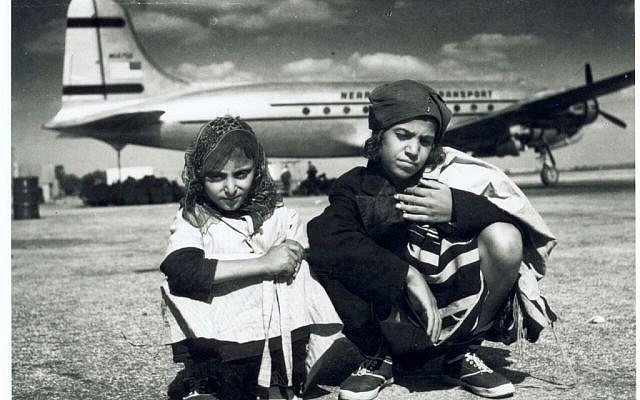 Illustrative: Children being airlifted from Yemen in Operation Magic Carpet, in front of an Alaskan Airlines plane. (Courtesy AJM)

Disputed by scholars and seemingly refuted by three state commissions that examined the matter and concluded that most of the children had died while being given medical care, the case has kept resurfacing, not least because most of the families were not given their children’s bodies or informed of their burial places.

Families have noted that many of the children’s death certificates were riddled with errors, and most of the missing children had army draft notices sent to their families 18 years after their alleged deaths. There have also been sporadic cases of adopted children who were able to confirm, through DNA tests, that they were from Yemenite families who were told they had died.

A 2001 report by the Cohen-Kedmi state commission on the issue concluded that there was no evidence of a systematic or state-sponsored effort to remove the children from their families, and that the large majority had died as the families were told — but also that 69 children disappeared without a trace from state hospitals and other institutions, whose representatives then lied to the families about their fate.

The claims have also been tied into the neglect and marginalization with which many Muslim-world Jewish immigrants were greeted when they arrived in an Israel controlled at the time by an Ashkenazi Jewish elite.