The talks will focus on imposing a “tight and short lockdown that will allow a quick reopening of the economy,” according to the statement from the Prime Minister’s Office.

Israel’s third national lockdown came into force last Sunday evening, but has yet to affect rising daily infections, amid reports that many are ignoring the new restrictions.

On Saturday evening, the Health Ministry said 6,004 new coronavirus cases were confirmed the previous day. Along with 2,154 cases recorded since midnight, the number of infections since the pandemic began rose to 433,799.

Prime Minister Benjamin Netanyahu gives a statement to the media in Jerusalem, on December 22, 2020. (Yonatan Sindel/Flash90)

The death toll stood at 3,384, with some 30 new fatalities. There were 48,701 active cases, including 739 people in serious condition, with 177 of them on ventilators. Another 185 Israelis were in moderate condition and the rest had mild or no symptoms.

Meanwhile, Channel 12 News reported that Israeli healthcare providers will start notifying thousands of Israelis that their appointments to receive the first dose of coronavirus vaccine are being delayed, amid concerns of an upcoming shortage and a desire to prioritize second doses for those who’ve already received their first injection.

Israel has reached a pace of 150,000 vaccine injections every day for the past several days, and on Friday officially passed one million vaccinations or some 11 percent of its population — far and away the world leader in vaccinations per capita.

The mass vaccination drive started at the beginning of last week and has so far focused mainly on healthcare workers, those aged over 60, and at-risk groups.

But doses are running out, and officials have been planning a slowdown of first-dose inoculations to prevent second doses from drying up.

Officials have said there will be no shortage of second doses for those who’ve gotten their first shots. 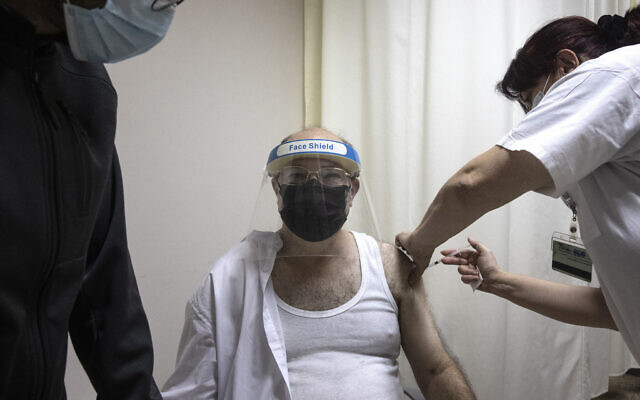 Still, data provided some optimism that Israel is well on its way to curbing serious illness, with Professor Ran Balicer, head of innovation at Clalit, Israel’s biggest health services provider, telling Channel 12 that 45% of people in at-risk groups and those over 60 had already been inoculated.

Meanwhile, Israel is reported to be pressing vaccine-making pharmaceutical companies Pfizer and Moderna to speed up the arrival of shipments to Israel. Channel 12 said Netanyahu spoke again over the weekend with Pfizer CEO Albert Bourla, for what the network said was the 13th time, but that no breakthrough had yet been reached on expediting shipments.

Amid rising morbidity, Health Ministry Director-General Chezy Levy said Thursday that his office would recommend that the government impose additional restrictions on schools, workplaces and traffic in the coming days.

Speaking in an online press briefing, Levy said he believed the current national lockdown was likely ineffective and that health officials planned to hold a reassessment on the current restrictions. 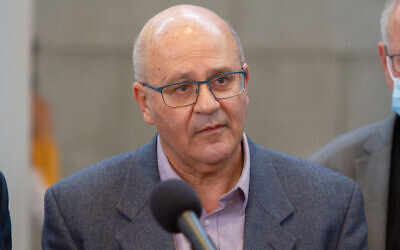 Chezy Levy, director-general of the Health Ministry, at a COVID-19 vaccination center in Herzliya on December 20, 2020. (Flash90)

“We are monitoring the increase in all indices and we are planning further steps that we may need to take in order to reduce the morbidity, firstly by tightening [the lockdown],” Levy warned.

“We are examining the infection rates and preparing these steps for submission [to the government] if we need to,” he said.

Although set for a two-week period with an option to extend, health officials have already warned the lockdown will likely go on for a month.

The current lockdown rules bar Israelis from entering another person’s home; restrict movement to one kilometer (six-tenths of a mile) from home, with exceptions, such as for vaccinations; shut down commerce (except for essentials), leisure and entertainment; limit public transportation to 50% capacity; and limit workplaces that do not deal with customers face-to-face to 50% capacity. Most schools, however, remain open.

Health authorities believe there is too much movement and traffic several days into the new lockdown, and fear the high morbidity will outpace the efficacy of vaccinations.

“If we continue at this rate of morbidity and fail to reduce it, we will double the number of serious patients, and reach hospital insufficiency, so yes, we think we may have to impose more restrictions,” Levy said.

“I do not know of any lockdown in the State of Israel,” Edelstein said. “We went to the cabinet with a proposal for a lockdown and a mix of restrictions came out.”

Speaking at a virtual conference hosted by Ariel University, coronavirus czar Nachman Ash conceded that the current lockdown “is not as effective as the previous ones.” He said that he supported extending the restrictions beyond two weeks.