The grandfather of an Israeli boy who was the sole survivor of a cable car crash in Italy was questioned by police on Tuesday after being accused of kidnapping his grandson from an aunt in Italy and bringing him to Israel.

Prosecutors in the northern Italian city of Pavia said on Monday that it was seeking the return of Eitan Biran, 6, to Italy in accordance with the Hague Convention on Children’s Rights, accusing Shmuel Peleg of aggravated kidnapping.

A carefully worded statement from police in Israel did not name Peleg or accuse him directly of kidnapping, but said that a 58-year-old man from Petah Tikva had been questioned in connection with a 6-year-old-boy being brought from Israel to Italy, following a complaint regarding the suspected kidnapping of a minor.

“At the end of his questioning, the suspect was given conditional release. The investigation continues,” the police statement said.

The Peleg family said in a statement that the grandfather was cooperating with investigators after Biran was brought to Israel “per his parents wishes,” and denied anything illegal had taken place. Peleg said that he held legal consultations before spiriting Biran out of Italy, Kan reported.

Biran has become the subject of an increasingly bitter custody battle after his parents, baby brother and two great grandparents were all killed when a cable snapped on the aerial tram bringing weekend visitors to the top of the Piedmont region’s Mottarone Mountain on May 24. A total of 14 people were killed, with Biran, who was hospitalized for weeks, the only survivor.

A view shows a journalist working by a cable car’s wreckage covered with a tarpaulin, on May 26, 2021, on the slopes of the Mottarone peak above Stresa, Piedmont, three days after a crash that killed 14 people. (Miguel Medina/AFP)

He has been cared for since by his paternal aunt, Aya Biran-Nirko, an Israel-born doctor in Italy, but last month, Biran’s relatives on his mother’s side publicly accused Biran-Nirko of kidnapping the child and announced they would seek legal relief in having him brought to Israel.

Biran-Nirko told Italian media that when Peleg had come to pick up the child for an arranged visit on Saturday morning it was agreed that the boy would be back by dinner. But when Eitan did not return, the aunt filed a police report on Saturday night, Italian news reports said.

The Italian daily Corriere Della Sera reported that Peleg drove with Biran from Italy to the Swiss city of Lugano, apparently having exited the country with his grandson’s Israeli passport. From Switzerland, they traveled on a private airplane to Israel, the newspaper said. 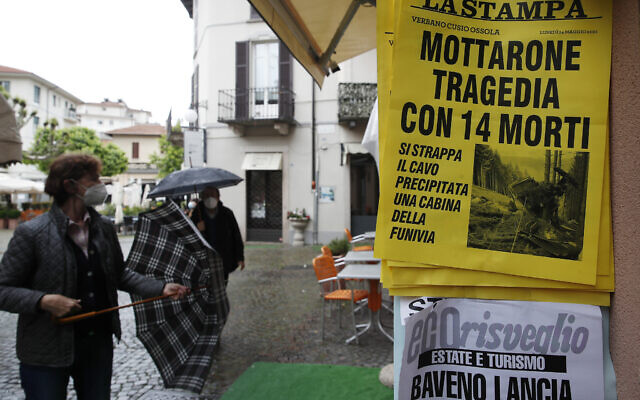 People stand in front of a newsstand displaying a daily headline reading in Italian “Mottarone, tragedy with 14 dead,” in Stresa, northern Italy, on Monday, May 24, 2021. (AP/Antonio Calanni)

According to the paper, Biran’s grandmother and Peleg’s ex-wife Esther Cohen is also wanted for questioning over suspicions that she played a role in bringing Biran to Israel.

Or Nirko, Eitan Biran’s uncle, told the newspaper that the maternal side of the family had refused to hand over the child’s Israeli passport, despite an Italian court order.

The Peleg family said on Sunday that Biran was undergoing “intense” treatment at Sheba Medical Center outside of Tel Aviv.

“He was not kidnapped or anything like that,” the family said. “He’s now in the arms of a loving, warm family as he should be.”

However, Nirko said that a relative had gone to the hospital to look for Biran but had been unable to locate him. 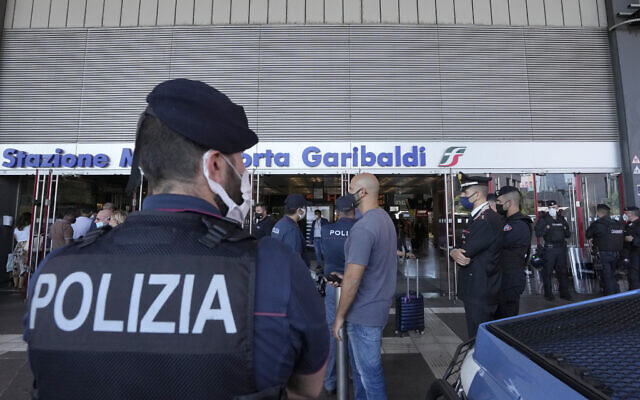 “The Peleg family is holding Eitan like he is being held captive by Hamas,” he charged, according to Italian media.

Though Eitan was raised in Italy, Peleg’s son-in-law, Ron Peri, claimed in August that the child’s Israeli parents had never wanted him to grow up there, and would have preferred that he receive a Jewish education in Israel.

In June, Marcella Severino, the mayor of the town of Stresa, where the cable car started out, told an Italian newspaper that Biran-Nirko was “a constant presence in the life of the child. He’s in good hands.”

Eitan suffered severe trauma in the crash and Biran-Nirko took on the task of dealing with the hospital system and his recovery, though Peri said that the arrangement was meant to be temporary.