US Secretary of State Mike Pompeo arrived in Israel on Wednesday for a trip that is expected to include a tour of a West Bank winery, the first time a top American diplomat has visited an Israeli settlement.

Pompeo — who has backed US President Donald Trump in refusing to concede defeat to President-elect Joe Biden — is on a Europe and Middle East tour that has so far taken him to France, Turkey and Georgia.

Prime Minister Benjamin Netanyahu has congratulated Biden, who has known the Israeli leader for many years, and on Tuesday referred to him as “president-elect.”

Pompeo flew to Israel on the same day as the foreign minister of Bahrain, one of three Arab states that have agreed under US-brokered pacts to normalize relations with the Jewish state. Palestinians have decried as a “betrayal” the historic deals that Bahrain and the United Arab Emirates signed with Israel and that have since been matched in principle by Sudan.

US Ambassador to Israel David Friedman, left, greets US Secretary of State Mike Pompeo and his wife Susan as they arrive at Ben Gurion Airport in Tel Aviv, Nov. 18, 2020 (AP Photo/Patrick Semansky, Pool)

Pompeo was to meet Netanyahu and Bahrain’s Foreign Minister Abdellatif al-Zayani at the start of his two-day visit.

Zayani said his own trip, the first official visit to the Jewish state by a Bahraini official, marked “a further step on our journey towards a better, more peaceful, more secure and more prosperous Middle East.”

All three countries — and several other Gulf states, including Saudi Arabia and the UAE — share a strong animosity toward Shiite Muslim regional power Iran over its nuclear program, its fueling of unrest from Syria and Iraq to Lebanon and Yemen, and its seeking of the destruction of Israel. 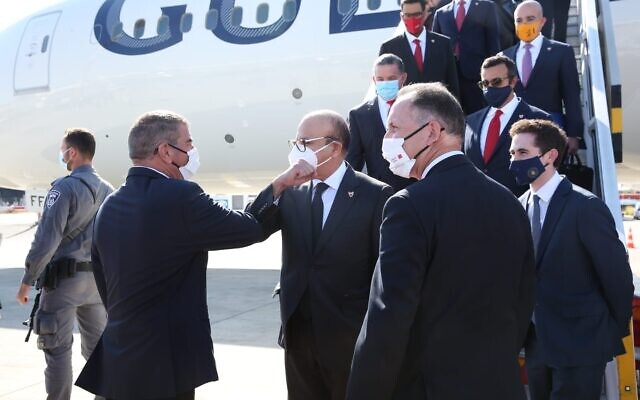 Israel said Wednesday it had hit Iranian targets in Syria with overnight airstrikes in response to the discovery of improvised explosive devices near a military base on its side of the armistice line on the Golan Heights. 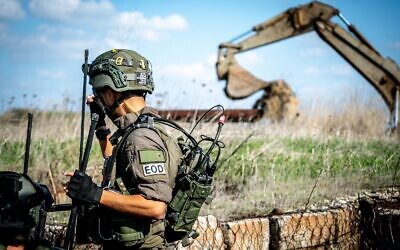 A combat engineer removes three anti-personnel mines that Israel says were planted inside Israeli-controlled territory along the border with Syria, on November 17, 2020. (Israel Defense Forces)

Senior officials reportedly “dissuaded the president from moving ahead with a military strike,” warning him that such an attack could escalate into a broader conflict in the last weeks of his presidency.

Pompeo had no scheduled meetings with Palestinian leaders, who have strongly rejected Trump’s stance on the conflict, including Washington’s recognition of Jerusalem as the Israeli capital.

But press reports said he was due to visit the Psagot vineyard in a settlement in the West Bank — a trip the US State Department and the vineyard have so far declined to confirm.

The expected visit would mark a radical departure from past administrations, both Democratic and Republican. 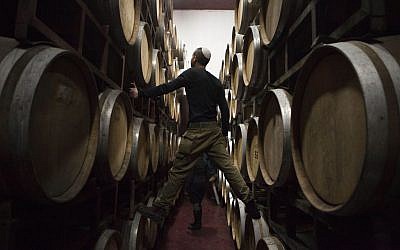 However, Pompeo said a year ago that the United States no longer considered Israeli settlements in the West Bank to be contrary to international law.

Those comments were hailed by the Psagot vineyard, which has been fighting to keep the label “Israel” on its bottles, rather than the phrase “Israeli settlements” demanded by several European court rulings.

The Psagot winery named a bottle after Pompeo to thank him for the move in February, and issued a statement saying he had recognized “the Jewish right to self-determination in our historical homeland.”

The West Bank visit could also burnish Pompeo’s credentials with evangelical Christians and other supporters of Israel should he pursue a post-Trump political career.

The Falic family of Florida, owners of the ubiquitous chain of Duty Free Americas shops, is a major investor in the Psagot winery. An Associated Press investigation last year found that the family has donated at least $5.6 million to settler groups in the West Bank and East Jerusalem over the past decade. Since 2000, they have donated at least $1.7 million to pro-Israel politicians in the US, both Democrats and Republicans, including Trump. They are also donors to Netanyahu.

One of the owners, Simon Falic, was not able to confirm Pompeo’s visit, but told the AP “it would be a great honor to welcome him and to thank him for his unwavering support of Israel.”

Dozens of Palestinians demonstrated in Al-Bireh, a community opposite Psagot, located between Jerusalem and Ramallah, and some threw stones at soldiers guarding the entrance to the settlement. 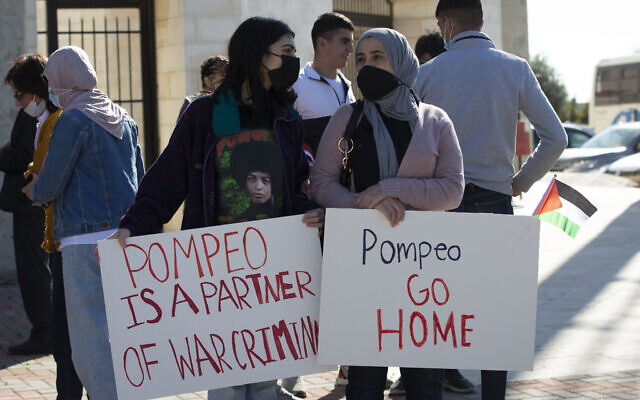 Palestinians protest against expected visit of the US Secretary of State Mike Pompeo to the Jewish settlement of Psagot near the West Bank city of Al-Bireh, Nov. 18, 2020 (AP Photo/Majdi Mohammed)

Palestinian Authority Prime Minister Mohammed Shtayyeh said Pompeo “is going to visit the… Jewish settlement simply because he is visiting a winery that has produced a bottle of wine named after him.