NEW YORK — How much you might enjoy the first hour of “The Last Vermeer” might be measured by how familiar you are with the name Han van Meegeren. If, like me, you had somehow never come across this footnote in Dutch postwar history, you might find yourself thinking “this is all very interesting, but why is this a movie?” And then there is the “aha!” moment. Luckily, it is only one such “aha!” so there’s not much damage if I spoil it here.

Han van Meegeren gets a movie made about him because he was probably the most successful art forger of all time. He created and successfully sold several paintings to some of the most prestigious people in the art world, passing them off as lost works by the 17th-century Golden Age master, Johannes Vermeer. And he would have gotten away with it, too, had he not sold one, at a tremendous price point, to Hermann Goering. (Goering may have just been trying to impress his boss, Adolf Hitler, who had two Vermeers, one of which was stolen from the Rothschild family.)

When the war ended, a Dutch Jew and resistance fighter with the Canadian forces named Joseph Piller was part of an investigative team looking into plundered goods. He arrested van Meegeren on the charge of collaboration with the enemy, and for making a bundle by selling one of Holland’s great treasures. In time, Piller became his greatest advocate.

To tell the story of a faker means you shouldn’t play it straight. British-Australian actor Guy Pearce, one of those people you have seen in a zillion projects but doesn’t really have a signature role, is outstanding as the rakish, charming, but not-quite-trustworthy swindler. Every line reading, every facial expression is just this close to going over the line into camp, but Pearce knows just how far to arch his eyebrows before breaking the spell. As he spins yarns about his youth as an artist crossing swords with critics, and later attending parties during the Nazi occupation, there is that seen-it-all, done-it-all sophistication that would be insufferable in real life but is delicious in a movie.

Dutch actor Claes Bang is more straightforward as Piller. He’s a Jew trying to find normalcy in the mayhem of Amsterdam, still under Allied occupation. Reunited with his wife and child, he is coming to terms with how she, who is not Jewish, was able to stay alive during the conflict. (She is blonde and beautiful, so I’ll let you figure that out.) While there isn’t much overt Jewish activity in the film, a scene in which Piller takes Shabbat candles out to light with his son is striking. Even through the war is over, he keeps them hidden in a case.

Van Meegeren is facing execution for his collaboration, which, if the paintings are fake, wouldn’t be just. Moreover, there is the notion that if van Meegeren rooked one of history’s worst monsters, maybe he’s actually something of a hero?

The filmmakers, director Dan Friedkin, and writers James McGee, Mark Fergus, and Hawk Ostby (the latter two best known for mainstream Hollywood fare like “Iron Man” and the science fiction series “The Expanse”), let you chew on this for yourself. Claes Bang’s Piller is much more interested in simply “getting to the bottom of all this.”

“The Last Vermeer,” at the end of the day, is a legal thriller in an exotic locale. (Side question to film producers: why so few movies set in Amsterdam? It’s a gorgeous city, and “The Last Vermeer” knows it.)

As Piller roots around for clues with his tough guy sidekick (Roland Møller) and his reliable, pliant female assistant (Vicky Krieps), he butts heads with competing investigators and upper crust art gallery owners who say things like “terrible thing what happened to your people” before belching out more anti-Semitic comments. But even though Piller’s the engine for the trial, it’s van Meegeren’s show, and if nothing else, the man was a showman. I don’t have the heart to check if the fireworks at this trial as shown in the film reflect reality; I’d much prefer to believe the movie’s version. 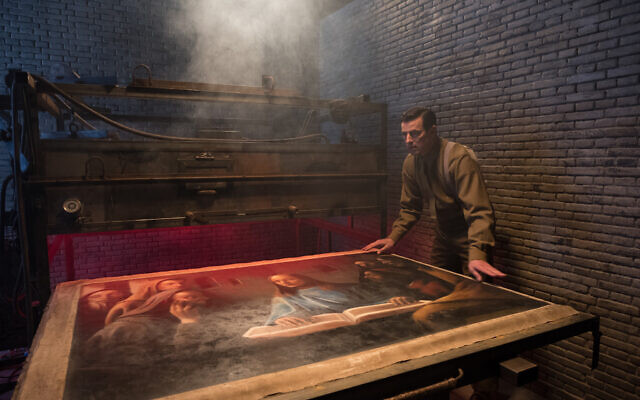 Immediately after the war van Meegeren was a folk hero in Holland. They say that before his death, Goering was made aware that his beloved Vermeer was a phony, and that he was devastated. Of course, no one really knows for sure.

In 2008 two books were published about van Meegeren. One, “The Forger’s Spell, A True Story of Vermeer, Nazis, and the Greatest Art Hoax of the Twentieth Century” leans into the idea of van Meegeren as a swindler of Nazis and savior of Dutch pride when it needed it most. The other, “The Man Who Made Vermeers: Unvarnishing the Legend of Master Forger Han van Meegeren,” takes a more studied, nuanced approach, and brings new evidence to light about his celebrity. The first book, naturally, was a best seller. But the second one is the credited source for “The Last Vermeer”’s adaptation. Perhaps that’s a clue about that second “aha!”